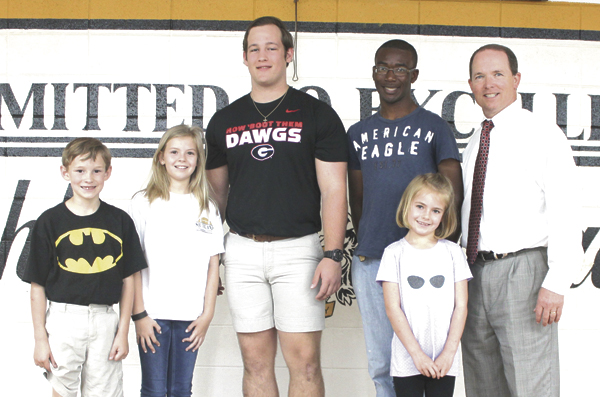 Perry Wellness Center Peer spearheads Pop Top Collection Project
AMERICUS — Followers of Perry Wellness Center (PWC) know about the ambitious donation project undertaken by the area recovery center’s Kaylon Holt. Holt, a young peer at the center, has established a goal of donating at least one million soda can tabs or “pop tops” to the Ronald McDonald House in Columbus, Ga. The aluminum tabs can be redeemed for cash and go toward needed purchases at the nonprofit institution, which serves parents of seriously ill children receiving medical services.
Holt has taken an interest in this project since he began gathering pop tops on behalf of a friend whose father was ill with cancer. He has now made it his mission to gather as many donations as possible for a worthwhile community program for others in need. Holt has both personally gathered pop tops and solicited them from others through personal appearances and placement of donations cans at area businesses and organizations.
One such organization is Southland Academy. In May 2015, the local school presented Holt with its first donation of 5,000 pop tops. (Information on this donation is available in the Peer Postings archive at the perrywellnesscenter.com website.) After 11 months, another donation of pop tops was recently received from Southland Academy. This time the donation totaled a record 52,000 pop tops.
This week, the 52,000 bagged pop tops were temporarily returned to Southland Academy for a photograph with a smiling Holt, several students, and Headmaster Ty Kinslow. As the donations were positioned on the Southland stage, an additional 3,000 pop tops were presented to Holt.
“We are proud to be a part of this mission to help others,” Kinslow said. “I am sure there will be more collecting by our students and staff at Southland Academy.”
In little more than a year, Holt has become the record individual collector for the pop top donations project at Columbus’ Ronald McDonald House, with donations of several hundred thousand soda tabs. In the coming days, Holt and Perry Wellness Center staff member will visit the Ronald McDonad House with his latest contribution.
According to a Ronald McDonald House staff member, “With this large donation by Kaylon and his supporters, all of the utility bills have been paid on time!”
When asked about his plans after he reaches his donation goal of 1 million pop tops, Holt smiled and replied, “I want to keep going with this collecting!”
Stuart Perry, founder and CEO of PWC, is proud of the work his peer center member has accomplished. He stated, “This project by Kaylon and other area supporters has been a perfect community awareness and public relations project. It is great to link Perry Wellness Center, Ronald McDonald House, and Kaylon together. I thank all who have been so thoughtful and generous with their giving. One pop top will help provide a free residence for those in Columbus with hospitalized children.”
Special thanks were offered to the students and staff of Southland Academy for their dedication in contributing to this worthwhile project.

I consider Americus a small city but our town is like my Atlanta daughter describes “one big neighborhood,” where you... read more