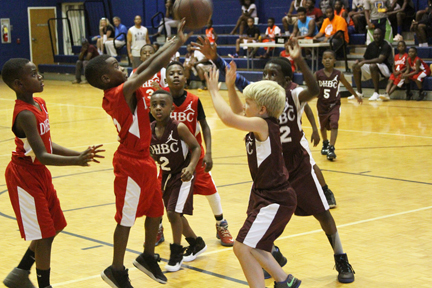 Michael Murray/Americus Times-Recorder: 7-8 year-old members of the DHBC battle for control of the ball during one of the organization’s basketball games on June 7 in Americus.

AMERICUS – The Dwight Harris Boys’ Club (DHBC) kicked off the organization’s summer session on June 1 in Americus. The program seeks to make a positive difference in the lives of local boys through basketball and community service.
In the summer of 2009, Dwight Harris, Sr. created the organization, later adding the basketball program in 2012.
Since then, hundreds of local youths have benefited from the program, with enrollment steadily increasing each summer.
Harris recently spoke with the Times-Recorder in between the league’s basketball games, which are held at the Staley gymnasium.
Asked how the summer session is progressing this year, Harris stated, “So far, it’s going extremely well. We have a lot of participants this summer, mostly kids from Sumter county, with one team that comes from Macon County and some participants from Schley county.. We have about 204 kids altogether, ranging in age from 7 years old to 17 years old. Each year, the number of people participating gradually goes up, so it’s a little bigger than it was last year.”
The program consists of the basketball camp as well as the Boys’ Club Day Camp, which seeks to keep local young men involved in the community and encourage them to make positive life choices. Many other members of the local community have donated time and resources to ensure the success of the program.
On the activities of the day camp and one impactful community contribution, Harris told the Times-Recorder, “The Day Camp is open to kids ages 6-12. We go out and do community service projects. We went to Langdale Automotive and the guys out there… very distinguished gentlemen… they donated a van to the Boys’ Club. That’s so I can carry those kids from place to place. We go on different trips… We have that van for the entire summer so we don’t have to worry about transportation… That was a great contribution for the kids in the community.” 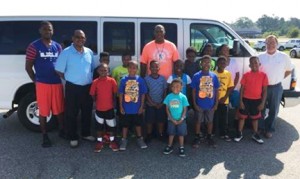 Submitted by Dwight Harris, Sr.:
Members of the DHBC stand in front of the van that was recently donated to the club by Langdale Automotive, of Americus.

“We try to teach them that, sometimes, you have to work without expecting to get paid,” Harris continued. “Sometimes, you just do things out of the goodness of your heart.”
Harris recently took the day campers to the Sumter County Sheriff’s Department to take a tour of the facilities and show the possible long-term consequences associated with poor life choices to the participants. “That’s to try to scare the kids straight,” Harris stated. “They saw the inmates. They saw what the inmates eat. They saw the dormitories and they didn’t see Playstations and Wii games or anything like that… We talked to them about all that kind of stuff and tried to show them that this is what will happen if they want to be in a gang.”
Following this day trip, Harris took several of the participants to the cemetery to give them a somber reminder of some of the other consequences of becoming involved in gang activity.
Participants in the day camp recently traveled to Magnolia Manor to visit some of the patients there as well.
Prior to this trip, Harris told the Times-Recorder, “The kids already made cards for some of the residents there, so we’ll go and take a tour. While we’re on the tour, we’ll pass out cards to the residents there. We’ll just talk to them and hug them because, you know, sometimes, they might not get to see their families very often. They’ll be excited about seeing these kids come out there to visit.”
Harris said that these trips often receive a great deal of positive feedback from the community.
The DHBC’s basketball program includes fun activities for kids of all ages. The league plays four games per night on weekdays at Staley, with five matches being hosted on Saturdays. In the program, kids are taught the fundamentals of the game, beginning at a very young age to set the stage for them to continue to improve as they get older. 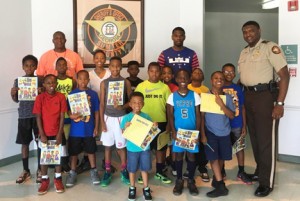 Submitted by Dwight Harris:
Col. Eric Bryant, of the Sumter County Sheriff’s Office pauses for a photo with members of the DHBC fter giving the kids a tour of the jail.

Harris, who serves as the announcer for the contests, previously told the Times-Recorder that, as a former basketball player himself, he enjoys imparting his knowledge of the game to the younger generation and encouraging others to do the same.
In addition to the exciting match-ups on the hardwood, the program provides half-time activities such as raffles and half-court shoot-outs for kids to participate in.
At the conclusion of the interview, Harris said that he would like to thank Langdale Automotive, Innovative Solutions, Lee Otis Burton, and Bethesda Missionary Baptist Church, among others for their significant contributions to the program.