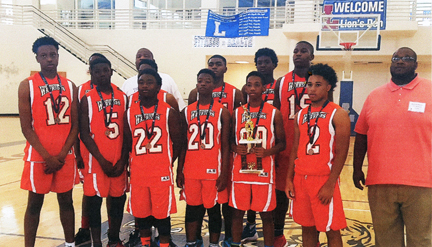 AMERICUS – The South Georgia Warriors are a newly-established travel basketball team under the leadership of head coach, Jason Reese, and assistant coach, William Anderson.
In the state district qualifiers, the team pulled in two wins out of three matches and is currently preparing to put their skills to the test at the National tournament, scheduled to be held in Orlando, Fl. this July.
In a recent press release, it was stated that “Coach Reese and Coach Anderson were thrilled after placing fourth in the state district qualifiers. Both of the coaches believed that anything is possible and know that, with a little prayer, all things are possible… Right now the team is open to 11th-graders; 16 and 17 year-olds that have a passion for the sport of basketball. South Georgia Warriors would like to thank the team’s supporters for their effortless contributions.”
The team consists of players ranging from 10th to 11th grade. Interested athletes who would like to be a part of the team are invited to contact Ulonda Reese at (478)316-0124 or administrator, Petrina Wallace, at (478)334-8682.

By MICHAEL MURRAY TROY, Al. – The Americus Travelers 16U baseball club saw a great deal of excitement this past... read more