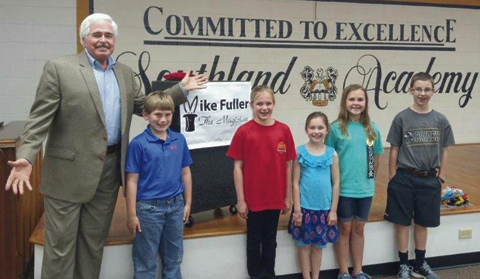 As a reward for reaching their Accelerated Reader goals, the Southland Academy lower school students were excited to attend a fabulous magic show performed by Mike Fuller, the Magician.  The students in grades 1-5 were mesmerized and intrigued trying to figure out how in the world Mike, the Magician, made the objects disappear and appear out of the thin air. Laughter, applause, astonishment, and even mouths wide open were common occurrences during the performance. The students and faculty were delighted to celebrate their AR success with such a fun event. Southland appreciates the Accelerated Reader Committee, Leslie Rye, and the teachers for the encouragement and support they offer the students. Shown from left are Mike Fuller, the Magician; Chandler Highnote, Gracie Burrell, Elli Dickens, Ella Arnold, and Lee Graft.