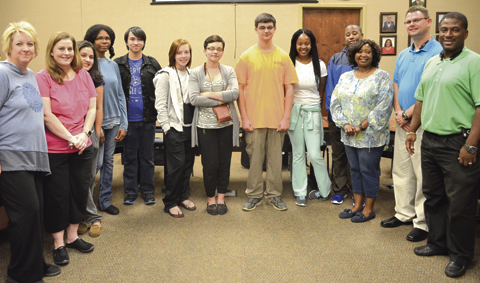 This group of students and administrators from the Sumter County Schools System left Saturday for a trip to Japan.

Students, administrators head off for Japan

AMERICUS — A group of bleary-eyed but excited students and parents met at 1 a.m. Friday night/Saturday morning to begin 28  hours of driving, flights, layovers, and train rides, to get to Americus’ Sister City of Konu, Japan. The trip began with a three-hour bus ride to Atlanta, a two-hour wait to get on the plane, and a five-hour flight to San Francisco. After another two-hour wait, the group boarded for an 11-and-a-half-hour flight to Osaka, Japan, then it was trains and automobiles for the final two-hour stretch to Konu.
The group will tour the schools in the rural Japan province,  attend a special reception with the mayor of the town, and learn about the education system and ways of life in this country halfway around the world. The group will also visit Hiroshima and tour the city and grounds where America dropped the atomic bomb during World War II.
Students were chosen for the trip based on essays written about Japan and about travel in general. Two students were chosen from the middle school, two from the Ninth Grade Academy, and four from Americus-Sumter High School. Those students chosen were Jamal Floyd, eighth grade; Sharon Bullons, eighth grade; A.J. Morris, ninth grade; Bentlee Roberson, ninth grade; Jasmine Jordan, 10th grade; Bailey Roberson, 11th grade; Daisha Roberts, 11th grade; and Thomas Trihn, 11th grade.
Also on the trip are Americus-Sumter High School Principal Kimothy Hadley; Ninth Grade Academy Principal, James Coleman Price; and current Sumter County Middle School Principal Stacy Favors, as well as Gayla Braziel, director of Federal Programs, and Angie Smith, wife of former Superintendent Donnie Smith.
All those attending who are currently in the school system had their trip paid for through a grant from the Japan Foundation. Others paid their own airfare. All members of the delegation will be staying in the homes of citizens of Konu. Then, in August, a group from Japan will be received in the homes of families from Sumter County, as their students tour the region as ours had theirs.
Each of the members of the delegation brought a book written by President Jimmy Carter to be housed in their local library. The books were donated by the Jimmy Carter National Historic Site. Before leaving, parents were told to look at their children one final time because they would never be the same after having made the epic journey.