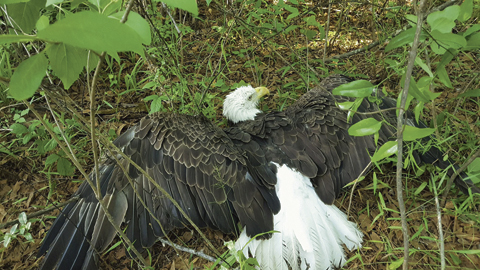 This is the way the wounded eagle was found in rural Sumter County.

Imagine this scenario: You are on your friend’s farm slowly driving the maze of field roads and trails. You have traversed these trails so often you have memorized every curve, pothole, tree and shrub. Even the vines and grasses are etched into your memory. You could drive this field road blindfolded if you had to. Suddenly, there in front of you, is something unfamiliar and out of place. You never noticed it because it was never there before. It’s a bird, a huge bird lying in the bare, earth-worn rut made by countless trips in trucks and tractors. As you get closer you notice the bird make a vain attempt to move. The bird’s energy is wasted as the bird has sustained injuries unbeknownst to you at this moment in time. Drawing closer still you recognize the white head and white tail and massive 6-foot wingspan as that of our national symbol — the Bald Eagle.
This is exactly what happened to my friend, David Wingard, on Monday, May 23, 2016. Within rock-throwing distance of Americus city limits, off Ga. Highway 49 North, David’s discovery quickly altered his afternoon plans.
At first David had no idea what to do, but his quick thinking and common sense told him the bird needed help. After much deliberation and thought he managed to toss a towel over the bird’s head, made sure he stayed well away from those massive talons and got the raptor into a dog box. “The eagle almost jumped at the chance to get into the box when I opened the door,” said David. Apparently the dark box appeared safe and inviting to the wounded eagle.
David raised his hand with all fingers spread wide. “The eagles talons were bigger than my opened hand,” he recalled. My research revealed the needle-sharp talons on Bald Eagles are up to two inches long and are the bird’s primary defense.
Wingard managed to make telephone contact with a Georgia Department of Natural Resources biologist who could help. The agreed on a rendezvous point in Andersonville. When they met, the biologist mentioned to David that he would follow him to the farm and attempt to collect the injured eagle. At this point David told the biologist, “I’ve got the bird in the back of my truck!” — thus making the biologist’s job much easier.
Within hours the eagle found his way to a rehab specialist in Twiggs County. From there the eagle was transferred to the best raptor rehabilitation center in the southeast United States — at Auburn University. Unfortunately my telephone calls for information on the eagle’s progress were not returned. Maybe Auburn University thinks HIPAA laws pertain to birds of prey also.
The sad news I learned on Memorial Day from David was that the eagle’s injuries were so severe that the bird did not survive. Apparently the eagle expired sometime over the holiday weekend. After speaking to David we were both heart broken. We had both hoped that a full recovery would be inevitable and a Sumter County release of the rehabilitated bird would occur.
Bald Eagles in the wild have a life span of between 20-30 years. Their eye sight is up to six times better than a human’s. Bald Eagles dine primarily on fish, but will take coots, ducks, geese and small mammals. Reports are probably exaggerated about Bald Eagles taking dogs, cats, young goats, sheep and human babies as they can rarely lift more than about four or five pounds.
According to the May 17, 2016, issue of Georgia Wild E-newsletter, Georgia DNR aerial surveys this winter and spring documented 201 occupied nesting territories, 149 successful nests and 240 young fledged. Two other nests were reported later, bumping the total to 203.
If I were a wounded Bald Eagle, David Wingard is exactly the person I would want to find me. He did the right thing and for that I am grateful. We are all grateful David. Thanks for caring.

I’ve enjoyed the 2016 Miss Georgia Pageant activities in Columbus this week from the vicarious position of my handy cell... read more