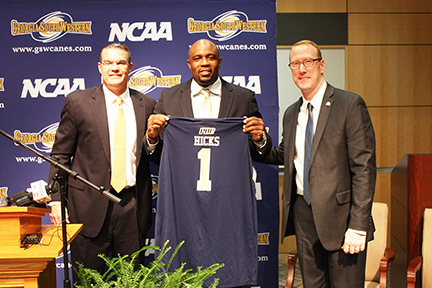 AMERICUS – Georgia Southwestern State University (GSW) announced that athletic director, Mike Leeder, has hired Ben Hicks to be the school’s next head men’s basketball coach in a press conference on June 23 in Americus. Hicks comes to GSW from Columbus State University (CSU), where he served as an assistant coach the past four seasons under Robert Moore.
“When we started the process to find our next head men’s basketball coach at GSW, we wanted to make sure the candidate was of unquestioned character, had great integrity, and was a good basketball coach,” Leeder said. “We found such a person in Ben Hicks.”
The 2015-16 campaign capped a successful run at Columbus State for Hicks as the Cougars won the Peach Belt Conference (PBC) regular season title with a record of 14-5, made their second-straight trip to the NCAA National Tournament, and finished with an overall mark of 21-8.
While at CSU, Hicks helped the Cougars post a .625 winning percentage with a record of 70-42.
“I would like to thank Dr. Patterson, Mike Leeder, and the search committee for providing me with the opportunity to serve as head coach for GSW,” Hicks said at the press conference. “I’m extremely thrilled and ecstatic to continue the great leadership, academic success, and community involvement that GSW has had over the years.”
Following the announcement, Hicks spoke with the Times-Recorder to discuss his new appointment. Asked what attracted him to the position, Hicks stated, “Obviously, knowing about the program. I played at Shorter and [the Hurricanes] were always very competitive. I coached the last four years [at Columbus State] and I’ve coached against great Mike Leeder teams. They have everything in place here. They have great facilities and great people here. They definitely have the resources. It’s also an hour and 15 minutes away from home. I’m originally from Columbus, so it’s ideal… Close to family.”
On his plans for the upcoming season on the hardwood, Hicks told the Times-Recorder, “Offensively, we will be up-tempo.  We’re definitely going to play at a fast pace and take good shots. We can’t score early in transition. What you’ll see, more than anything, is tough, defensive-minded guys getting down on the defensive end and making it hard for the other team to score.”
Hicks, a Phenix City, Ala. native, arrived at CSU following a one-year stint at NCAA Division I member, Jacksonville State University (JSU), where he helped guide the Gamecocks to the Ohio Valley Conference Tournament and their second-ever tournament win.
Prior to JSU, Hicks enjoyed four successful years as the head coach and athletic director at Alabama Southern Community College in Monroeville, Ala. After a 15-15 record his first year at the helm, Hicks had one of the best three year stretches in school history, posting a 73-22 overall record and 42-6 mark in ACCC action. He posted three straight 20-win seasons including a 27-5 record in the 2009-2010 season in which he received the Birmingham Tip Off Club’s Glen Clem/Junior College Coach of the Year Award and his second consecutive ACCC Coach of the Year award.
Before arriving at Alabama Southern, Hicks served as assistant coach and recruiting coordinator at Chattahoochee Valley Community College (CVCC) in Phenix City, Ala., for head coach Richard Mahone from 2005-2007. In addition to his recruiting efforts, Hicks played an instrumental role in the team’s overall academic development and skill improvement which included: scouting, marketing, and public relations for the CVCC Pirates basketball program. During his two seasons at CVCC, the Pirates played in consecutive state championship games.
“I will strive continuously to ensure GSW’s rich tradition and success of the men’s basketball program is sustained,” Hicks said.
On the new hire, and Leeder’s move to full-time athletic director at GSW, the university’s interim president, Charles Patterson, told the Times-Recorder, “In order to really move the university’s athletics forward, we need a full-time athletic director. Mike’s done a great job in dual roles, but the time needed to serve in both of those capacities is exhausting, honestly. So, we’ve moved [Leeder] to full-time athletic director. He’ll dedicate his time there to making sure that all of our ten PBC sports teams have the support that they need to be competitive and create a great environment for our students here, on campus. That necessitated us going out and searching for a new coach.
“Our new coach, coming from Columbus State is great. We’ve had a great rivalry with Columbus State and, hopefully, that will continue. We’re looking forward to his success here at Georgia Southwestern.”
With the appointment, Hicks becomes just the fourth head men’s basketball coach at GSW since 1990. He takes over for Leeder, who completed 10 seasons at the helm.
“I am confident that Ben will continue to build upon some of the recent success we have had in our men’s basketball program,” Leeder said. “I am looking forward to watching his vision for the program evolve.”
Hicks got his start in the coaching ranks as an assistant coach at Middle Georgia College during the 2002-2003 season before being named interim head coach for the 2004-2005 season.
Hicks is a 1997 graduate of Russell County High School who went on to play college ball at Bevill State Community College in Jasper, Ala. and wrapped up his career at Shorter College in Rome, Ga.
He graduated from Shorter in 2003 with a bachelor’s degree in Liberal Arts and then went on to get his master’s in Sport and Fitness Management from Troy University in 2007. He is a member of Omega Psi Phi Fraternity, Inc.
Hicks has two sons, Trey and Benjamin, and daughter, Brianna.

From the Archives: Taking a journey through the AHS Pantherettes’ historic 1966 basketball season; part four