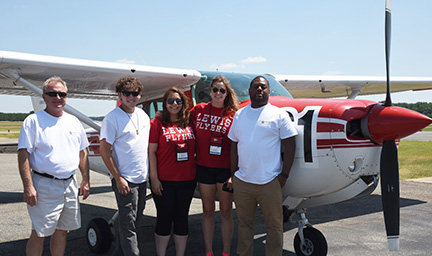 AMERICUS – The Air Race Classic (ARC), an all-women cross-country airplane race, passed through Americus on June 23-24, with pilots stopping at the Jimmy Carter Regional Airport (JCRA).
Over fifty airplanes executed high-speed flybys over a timing line at the JCRA as teams raced the clock on a four-day, 2,716-mile course that spanned the country, beginning in Prescott, Arizona, and coming to an end in Daytona Beach, Florida.
Many racers landed in Americus before going on to the next stop to refuel and rest. Several racers also stayed overnight in Americus.
The Times-Recorder spoke with some of the pilots on June 23, before they took off on the final leg of their journey.
Terry Carbonell and Ellen Herr, who were flying plane number 11, composed a racing team dubbed “Team Wild Mama”. These two adventurous pilots told the Times-Recorder that they are both from Florida, and have been competing in the ARC for six years.
Asked how they first became interested in competitive flying, Herr joked, “Well, it’s her fault (gesturing towards Carbonell). She got me into this. It’s a good challenge for any pilot. I’m not commercially rated. To me, it’s just a serious hobby, but it’s a good challenge to keep your skills up and your brain active. We won the first year that we flew together, which was really good and then we got hooked. That’s what happens. We had a good outcome the first time.”
“With the exception of last year, we’ve finished in the top 10 every year that we’ve raced together,” Carbonell added. 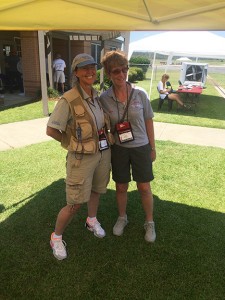 Michael Murray/Americus Times-Recorder:
Members of “Team Wild Mama” take a break at the Jimmy Carter Regional Airport after making their fly by on the morning of June 23 in Americus.Terry Carbonell is pictured at left, and Ellen Herr, at right.

On their experience up to that point in the race, Herr stated, “It’s quite interesting. You get to see some really cool parts of the country, meet some interesting volunteers, go to airports that you might not necessarily stop at otherwise, and figure out the best way to get from point A to point B in good weather. It’s quite stimulating.”
At the time of the interview, the “Hot Mama” pilots had not decided whether or not they would spend the night in Americus.
“We haven’t decided yet,” Carbonell said, when asked. “We just landed after doing two legs this morning… We’re going to sit back and look at the weather and decide what to do next.”
“It’s all about finding a tail wind,” Herr concluded.
Sarah Cameron and Jessica Hernandez, from Lewis University, in Chicago, also spoke with the Times-Recorder on the morning of June 23. The pair, composing a team named, “The Lewis Flyers” flew plane number 61.
Hernandez is currently a flight instructor at Lewis University. Cameron, a senior at the school, is a commercial pilot and is studying to become a flight instructor.
Asked how they became involved in the race, Hernandez responded, “I’ve always wanted to be in the air race. Ever since my freshman year of college, older pilots have been participating, so I was jealous. I thought ‘Oh, that’s so cool. I wonder what that’s all about.’ I found it so interesting that it’s all women. Working at Lewis [University]… It’s such an awesome school… They came to me and Sarah and asked us if we would represent the school in the Air Race Classic.”
On their experience in the race to that point, Cameron said, “It’s been beautiful… flying over the mountains. It’s so challenging, too. It’s super high… elevation, so we have to really plan ahead and make sure that we get the correct performance to be able to climb over the terrain and everything.”
“It’s definitely a new experience for both of us,” Hernandez added.
The pair stated that they would be leaving soon to take on the final leg of the journey. 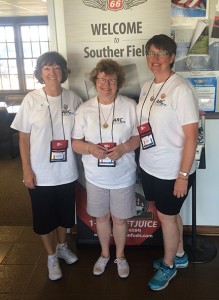 Michael Murray/Americus Times-Recorder:
From left; Donna Harris, Joanne Allcorn, and Lara Gaerte, pause for a photo op in front of the “Welcome To Southerfield” sign, located at the Jimmy Carter Regional Airport in Americus. The trio of pilots, who have been working together on the director’s board of the ARC for years, flew the race together this year.

The final team to sit down with the Times-Recorder was dubbed “The Blackbirds”; named after the SR-71 Blackbird stealth fighter jet. Fittingly, the team was flying plane number 71.
Lara Gaerte, Joann Allcorn, and Donna Harris make up the team, which landed at JCRA on the morning of June 23.
With the three team members each coming from different corners of the United States, the trio forged their alliance after serving together on the director’s board for the ARC for many years.
“We’ve worked together for several years and decided to try to fly together,” Allcorn told the Times-Recorder.
Gaerte has participated in the race eight times while Allcorn has participated in the race six times. This year marks Harris’ first time participating in the race.
Asked about her impression of the race in her first event, Harris answered, “Wow! I’ve worked as a volunteer on the board for three years. I get to see the racers in the beginning and the end. I see their adrenaline rush. All the while I’m thinking, ‘What’s the big deal? It’s just flying.’ No, it’s not. It goes way beyond just flying. You learn a lot. I have learned so much. These two women that I’m flying with have taught me so much… It’s about picking the right altitudes. It’s about finding the good winds. It’s about strategy. You really learn more than just how to fly the plane. It’s a real adrenaline rush.”
“You go to places that you would never, otherwise, visit,” added Allcorn. The route is established years in advance, so it’s different every year. Like I say, we would never have gone to a lot of these places. They’re usually small airports. This is a way of enlivening them and putting new emphasis on aviation in an area that, perhaps, have gotten tired or been forgotten.”
Allcorn recounted the story of a small airport in Tuscola, Illinois, which was run by an elderly man who had all but given up on the airport. Since the airport was included on this year’s route, Allcorn said that the man had become very excited to sponsor the event. “He has gotten back into aviation. He is excited about his airport and how it contributed [to the event]. It’s a wonderful thing,” she continued.
Asked about the race’s highlights this year, all three of the pilots agreed that meeting new people is one of the most enjoyable parts of the event. “The other racers…,” Gaerte said. “Hearing their stories, where they’re coming from, and learning about their experiences… like the volunteers on the ground… It’s really great”
We tend to be so focused on the race and getting to the next leg that we forget that there are a whole bunch of people at each stop that put in a lot of hours just for us,” Allcorn added. “Whether it’s five minutes as we get fuel and go, or we stay overnight. It’s fun to just talk to them and get to know their stories, too.”
“And, as we stop at each stop, they get a chance to showcase their piece of the puzzle,” Gaerte continued. “What they do in aviation and what their community does in aviation. So, you meet people that are excited about aviation, but also excited about the community that they live in. They get a chance to showcase it.”
The trio of pilots stated that they were planning on staying the night in Americus. “We have lots of time to sit back and look at the weather and decide what we’re going to do. We’d like to, maybe, have a nice dinner here…”
Gaerte went on to say that part of the reason that she continually enjoys participation in the race is because she would like to help encourage others to follow suit. “If something that we do, either directly or indirectly, makes someone else say, ‘Hey, maybe I can do that,’ that’s the influence that we try to bring to it. That’s the most rewarding thing,” the pilot concluded.
Mike Cochran, an Americus resident, who is heavily involved with Southerfield Aviation, was one of the principal planners for JCRA’s involvement in the event.
“Because we have South Georgia Technical College here, they chose this as one of their stops,” Cochran told the Times-Recorder. “This was a good place to stop in the route that they were going to fly through, so they chose our site, here, to stop at on their way to Florida.”
Asked if everything had gone smoothly up to the point of the interview, Cochran stated, “It’s been great. We’ve had a lot of community support from the schools and the aviators that are outside, timing and doing all kinds of tasks that we have to have done. There are some students from Georgia Southwestern and South Georgia Technical College that are helping us during this week’s event. Without that kind of community support, it’s very hard to make something like this come together. As you can see, it’s just clicking along perfectly.”
On the effect that the event will have on the JCRA, as far as raising awareness of the airport and the Southerfield Aviation organization, Cochran answered, “It will definitely raise awareness because the people that come through here are finding out things about the airport that they didn’t know. This was the only World War One airbase in Georgia in 1918. We’re coming up on our hundred-year anniversary. They’re finding out about Lindbergh’s first solo flight taking place here and about how it was built during WW1 and then it continued to serve the military during WW2. After that, the Technical College her took over the site. Basically, the people who are coming through here are learning about that and how this area has so much to offer, especially in Aviation.”