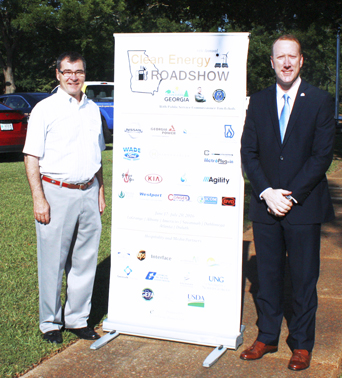 AMERICUS —  Public Service Commissioner Tim Echols hosted a series of public seminars around the state dealing with clean energy and its future in Georgia. Georgia Southwestern State University (GSW) hosted the Americus site Wednesday.
The Clean Energy Roadshow visited eight cities in Georgia highlighting  Georgia’s energy outlook and the advancements in vehicle technology, agricultural equipment and clean power generation that bring cost-cutting and revenue generating opportunities to local governments and private industry. This is the sixth year of the annual event.
Echols talked with the Times-Recorder at the end of the road show at GSW.
“We had a good crowd. Dr. Charles Patterson and I are friends from his Georgia Southern days and he ‘s really wanting to expand this campus’ breadth of influence and so having us here is a significant thing.”
Echols said a number of farmers had attended the road show.
“There’s a big ag program with the USDA called the REAP energy program that pays for 25 percent of renewable energy projects for any small business or ag-related business. We promoted that and we talked about a variety of different renewable projects that folks can consider from electric cars. [There  needs to be a lot more. You can’t just have one because if it’s broken and you have people here, they’re in trouble], so we need more infrastructure.”
Echols was asked about Georgia Power’s proposal to build a  nuclear power plant in rural Stewart County. He said the PSC will vote on this matter on July 28 whether or not to give Georgia Power “some or all of the $175 million that they’re asking for to start a licensing process for that 7,000 acres sitting in Stewart County.”
Echols said he drove through Stewart County a couple of days prior and saw a lot of shuttered buildings. There are two towns in Stewart, the county seat of Lumpkin, and Richland.
“The economic impact of a Georgia Power facility in that county would be enormous to both the county tax revenue and the school board’s tax base,” Echols said. “So I feel like that of all the counties in the state of Georgia who could use a shot in the arm right now, Stewart County’s one of them. It is one of the poorest counties and certainly it [a nuclear power plant] would have an impact … My guess is … that we will proceed to build a nuclear power plant there, first approving the license and then the commission will have to come back in either 2019 or 2022 and approve the actual building of the plant itself. The initial study would be about what kind of reactors to put there and to get the licensee to grant the license. We wouldn’t really be moving any dirt, but at some point there would be a vote on the commission on whether to spend upwards of 14 or 15 or 16 billion dollars in that county. It would be a tremendous boost for Southwest Georgia.”
Echols noted the economic activity as a result of Plant Vogtle.
“Today, there are 6,300 workers over there and … probably 50 different construction projects going on inside that plant, so it’s something that would be good for the region.”
Echols was also asked to comment on the fact that Georgia Power is behind on its projects at Vogtle.
“Georgia Power is 39 months behind at Vogtle,” he said, “It’s expensive to be behind. In their defense it was the welding out of Louisiana that got them behind. The modules came in and they welded incorrectly and they had to be corrected and it threw us behind. We saw that with Unit 3. We’re building Units 3 and 4. … Not nearly the learning curve on Unit 4. If we were building the same kind of reactors … in Stewart County, we’ve already had the learning curve so there really shouldn’t be a learning curve over in Stewart County. So I would not anticipate having schedule issues if we did go ahead and build a plant over here [in Stewart].
Some area businesses in Sumter County have replaced traditional power resources with solar panels, and an electrical vehicle charging station was added to the city municipal building in downtown Americus. A project is also underway with the National Park Service at Andersonville National Cemetery to convert mowers and trucks to use propane, and the first solar panel in Georgia was used in this area and is in the Leslie, Georgia Telephone Museum. The Sumter County School System now has at least two propane fueled buses.