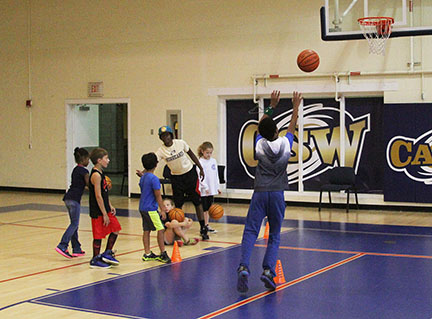 Michael Murray/Americus Times-Recorder: Participants in the GSW Sports and Science Summer Camp practice their shooting skills on the basketball court under the guidance of former Lady Hurricanes team member, Shanedra Lockett, in Americus.

AMERICUS – A group of professors at Georgia Southwestern State University has launched an exciting new summer program for kids, dedicated to encouraging local youths to engage in athletic and scientific disciplines.
This summer marks the first year of the GSW Sports and Science Summer Camp, which was envisioned by Dr. Catalina Casaru, an assistant professor in the department of Health and Human Performance, and Dr. Nedialka “Nelly” Iordanova, an associate professor in the department of chemistry.
During the camp, students learn valuable athletic skills in a range of sports, including basketball, volleyball, badminton, and swimming. Campers also participate in various scientific experiments, aimed at inspiring them to explore the various scientific principles that they may encounter in everyday life.
Casaru and Iordanova recently spoke with the Americus Times-Recorder (ATR) to discuss the camp.
Casaru, a former Olympian and All-American swimmer, told the ATR, “It’s just a great opportunity for the Americus community. We begin with a combination of sports skills. In the afternoons, we’re doing some lessons… In a week, students will have the opportunity to do about eight different science lessons.”
“The purpose of the swimming activities is to learn strokes and new techniques as well as making sure that the kids are safe in the water. That’s our top priority,” Casaru continued. “As for the science part… There is often not much interest in science in the schools. So, we’re trying to encourage students to develop an interest in science and not be afraid of the subject. Science is involved in everything that we do on a daily basis.” 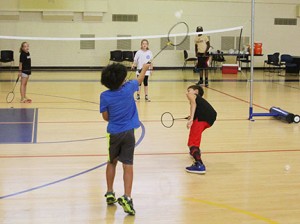 “First of all, we want to spark their interest and let them have fun learning new things in the form of games and hands-on experiments,” Iordanova added. “A lot of them, depending on their age, have not had much experience with science and the things we show them have a ‘Wow!’ effect. They really like that. Also, while they perform the experiments, they learn basic things about scientific phenomena which they might not encounter in school.”
Iordanova went on to describe some of the experiments that participants would be undertaking during the week, including making ice cream with liquid nitrogen, learning about endothermic and exothermic reactions, creating photosensitive dye which will be used to imprint images on T-shirts, and using chemical reactions to create ‘elephant toothpaste’; a massive foamy structure. All of these experimemnts are performed alongside lessons in sports fundamentals.
“They are simple science experiments,” Iordanova said, “But the science behind them is deep enough. It’s not too complicated for them to understand, though… We just think it’s a great opportunity to combine sports and science. That way, the kids don’t get overwhelmed playing sports the whole day or doing science experiments all day.”
“I think it’s a great opportunity for the kids to come onto the GSW campus and see what facilities we have available,” Casaru said. “We hope to expose them to different classroom types, learning experiences, and the equipment that we have. We want to showcase what GSW has to offer for the community and for the kids.”
“Also, we want to get them to think about college at an early age,” Iordanova added. “They think, ‘It’s interesting. We can learn new and exciting things. We can play different kinds of sports.’ Many kids don’t have the opportunity to be exposed to some of these things.”
Casaru concluded, stating that they would like to offer the camp next summer as well.