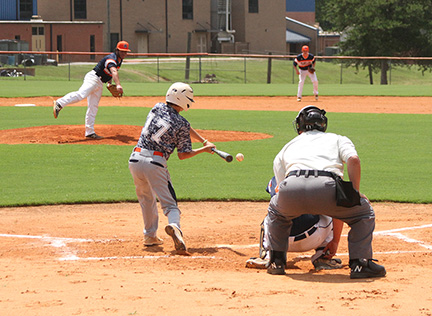 Michael Murray/Americus Times-Recorder: Travelers 16U pitcher, Will Kelley, turns up the heat as he throws to Travelers 15U’s Will Hubbard during the first match of the Travelers Weekend Challenge on July 9 in Americus.

AMERICUS – The Americus Travelers 16U Baseball Club returned to their home field at the Thomas L. Bell Stadium in Americus on July 9 to host the Travelers Weekend Challenge. The tournament, which was originally projected to host five teams, was eventually relegated to three teams due to a pair of expected participating teams having to cancel at the last minute.
The resulting tournament, though shorter than initially expected, saw three tough match-ups between the Travelers’ 16-and-under team (16U), the Travelers’ 15-and-under team (15U), and Game on Abney, of Cartersville.
The 16U Travelers opened the action with a match-up against the 15U Travelers on the morning of the tournament, earning a 9-1 victory over their younger counterparts. The 15U team followed with a contest against Game on Abney, suffering a 13-1 defeat.
The 16U Travelers then took the field to face off against Game on Abney, a team who had previously beaten the Americus-based crew, 8-5, in the Parkview Shootout in Gwinnett County earlier this season. With the sting of this defeat still fresh in their minds, the 16U Travelers battled to a 3-3 stalemate in the eight-inning tournament closer, as both teams stubbornly refused to accept defeat.
In the tourney opener, the Travelers 16U jumped on the younger team early, pushing five runners across the plate in the second frame. After the 15U team responded with a run of their own in the bottom of the inning, the 16U crew put fence posts on the scoreboard, adding one run in each of the subsequent four stanzas, eventually taking the 9-1 win.
The match was highlighted by a fielders’ choice in the third frame that allowed (16U) Chance Holloman, of Schley County, to cross the plate, followed by a solo out-of-the park homerun off the bat of (16U) Will Kelley, of Bainbridge, in the fourth frame. 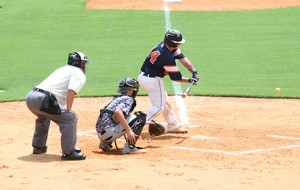 Michael Murray/Americus Times-Recorder:
Travelers 16U catcher, Jarrod Wall, takes a powerful swing in the fourth inning of the team’s tournament opener against the 15U Travelers on July 9 in Americus.

Will Lang, of Lee County, set the pace for the 16U team’s batters, collecting three hits in the match, while Kelley and Holloman followed closely with two apiece.
Tyler Ross, of Lee County, brought in a pair of RBIs in the contest, while Will Lanneau, of Crisp County, added one.
Kelley pitched four innings in the match before relinquishing the hill to Ross, who closed out the game. Both hurlers managed to strike out three batters during their time on the hill.
Shortly after the conclusion of this game, the Americus 15U team returned to the field to face Game on Abney, who dealt the home team a devastating 13-1 blow.
Following this defeat, the Americus 16U team returned to action, eager to avenge the team’s defeat at the hands of Game on Abney, three weeks prior.
The visitors opened the scoring early, plating one runner in the second inning, before the scoreboard fell silent over the following three frames. Game on Abney added another pair of runs in the sixth stanza and the Travelers responded in kind, plating two runners on a sacrifice grounder by Gavin Paul (of Lee County) and an RBI hit off of Lanneau’s bat.
The Travelers rode this momentum into the next stanza, bringing in one runner to equalize the score at 3-3, where it would stay until the game’s conclusion.
Despite the game’s outcome, the Travelers logged more hits in the match than their opponents (9-5), with Lanneau and Jarrod Wall, of Schley County, each collecting two. Lanneau contributed one RBI to the Travelers’ cause.
Paul went the distance for the Travelers, pitching all eight innings and striking out 11 opponents.
The following day, on June 10, the Travelers 15U team traveled to Columbus to play a double-header in the Columbus showcase tournament.
The Travelers 15U team took a pair of wins over BCBA/Columbus in the tourney, defeating their hosts 7-1 and 4-0.
Both the Travelers’ 15U and 16U teams will travel to Panama City Beach, Fla. On July 24-30 to participate in the Grand Slam World Series. The Grand Slam World Series is an annual event that draws baseball clubs from across the United States. 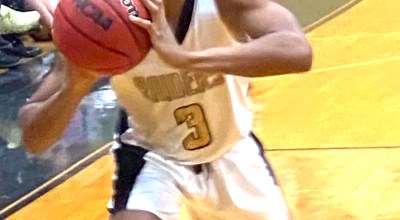 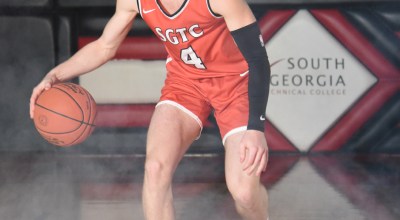 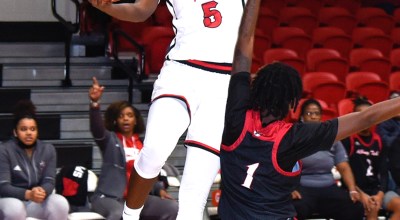 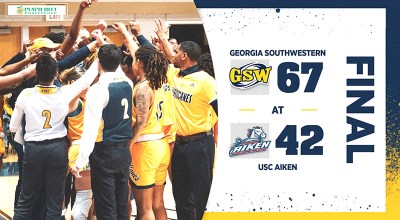