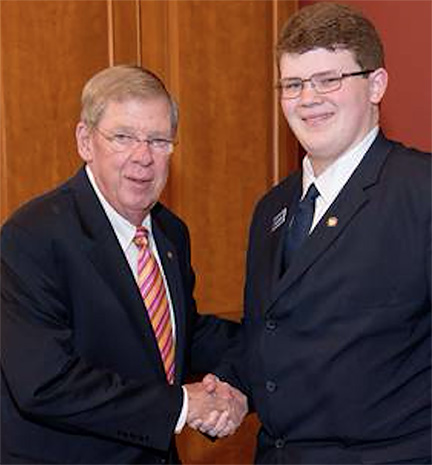 WASHINGTON DC – U.S. Senator Johnny Isakson, R-Ga., has appointed Kerman Douglas Goodin II, a rising high school senior from Americus, Ga., to participate in the United States Senate Page Program in Washington, D.C.
“I was proud to welcome Doug to our nation’s capital and into the highly competitive United States Senate Page Program. He is representing Georgia and our office well,” said Isakson.
Goodin began serving as a Senate page on June 13, 2016, and will remain in the program through July 15, 2016. He previously served in the Georgia State Senate Page program in 2011 and 2012.
Goodin, who has completed his junior year at Schley County High School in Ellaville, maintains a 4.0 grade point average and has made his school’s honor roll every semester. In addition to his strong academic record, he is also involved in multiple extracurricular activities. He is an Eagle Scout, a marching band drum major, an officer on his school’s student council, and a leader of the Schley County High School bible study. He is involved with many organizations on campus, including the senior Beta club, foreign language club, drama club, the concert and marching bands, and the golf team.
The Senate Page Program is an enduring tradition dating back to 1829, when the first Senate page was appointed by Senator Daniel Webster. Female students began receiving Senate page appointments in 1971. Senate pages are required to be high school juniors and at least age 16.
Isakson is allowed to appoint one Senate page from Georgia per session and there are typically four sessions per year – fall, spring, and two shorter sessions over the summer.
Senate page duties include preparing the Senate chamber for sessions, delivering legislation and correspondence inside the Congressional compound and distributing statutes and amendments on the Senate floor.
Isakson’s office is currently accepting applications for the spring 2017 session.