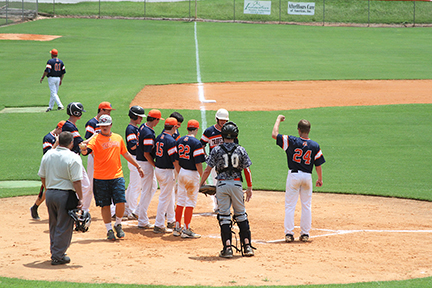 Michael Murray/Americus Times-Recorder: Members of the Travelers 16U team gathered around the plate to congratulate team member, Will Kelley, as he completes a round-trip following a homerun on July 9 in Americus.

PANAMA CITY – The Americus Travelers 16U Baseball Club will bring their 2016 season to a close at the Grand Slam World Series of Baseball in Panama City Beach on July 25-30.
According to a recent press release, Head Coach Tim Estes’ squad has played one of the toughest schedules in the Travelers’ 20-year history this season and he is hopeful that the tough battles have prepared his team for a shot at the National Championship.
“Our kids have played against some of the top teams in the Southeast this summer. At times it has taken a toll on us but our hope is that it’s battle tested us and prepared us for the level of play we’ll face at the Grand Slam World Series” Estes said.  “If you’re looking at the kind of talent that this team has lined up against, look no further than teams like the Montgomery Rays, who recently won the AAU 16U World Series. Troy Post 70 recently won the Alabama American Legion Championship. The Carolina Hurricanes recently finished as the runners-up at the Prospectwire National Championships.”
The rugged schedule has been one that has not only prepared the players for their next level of baseball it has also exposed them to dozens of college coaches who are seeking talented players for the coming years. “I would be willing to say that our kids have played directly in front of at least two dozen college coaches this summer” said Estes. “I’ve had numerous phone conversations, text messages, and emails about many of our players and I’m confident that many of them will get the opportunity to play collegiately in the near future”.
The press release went on to say that, as the team prepares to leave for Panama City, they will be relying on solid pitching and defense, timely hitting, and, most importantly, chemistry to carry them deep into tournament play.
Sherwood Christian’s; Jarrett Kemp has lead the team all season at the plate and is hitting .465 in the leadoff spot. Bainbridge High’s Will Kelley is close behind at .403 and Lee County’s Will Lang has been a hot bat as well hitting .450 on the season. 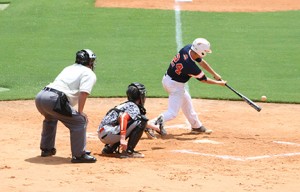 Michael Murray/Americus Times-Recorder:
The Travelers’ Will Lanneau, of Crisp County, connects with a pitch during the second inning og the team’s July 9 match-up against their 15U counterparts in Americus.

The Travelers will need solid pitching to compete at the National Level as well, and Lee County’s Gavin Paul a 6’4 left hander has been solid all season for the Travelers. “Many people think you have to be dominant, from a velocity standpoint, to be effective but that’s just not accurate” said Estes. “Velocity plays a role, but you’ve got to be able to hit spots and move the ball around, change speeds and locate your off speed stuff and Gavin has done a tremendous job of that all season”.
Another player who has had a great summer is middle infielder; Camron Vanlerberghe, of Schley County. Vanlerberghe is hitting .304 entering the series and has provided outstanding defensive play at both the short stop of second base positions. Catchers Jarrod Wall of Schley County and Will Lang (Lee County) have alternated the catching duties and have performed well behind the dish. In the outfield, Reid Ragsdale has anchored centerfield and is considered one of the top defensive outfielders in his class. Kemp, along with Lee County’s Tyler Ross and Schley County’s Chance Hollomon, also see ample time in the Travelers outfield. Crisp County’s Will Lanneau, a four-year starter for the Travelers, has performed well in the middle infield and will be counted on offensively and on the mound to provide much needed depth.
“One of the unexplained phenomenons of the Travelers success has been the team’s chemistry,” the press release continued. “All of these kids like each other and get along really well,” Estes said. “Their families enjoy the atmosphere and we’re like one big family. Some may not see that as a key ingredient to success but it’s a big part of what makes us successful. We never get too high or too low, we’re able to keep things on an even keel and the parents and fans help to keep everyone grounded”.
Not many would argue with the success this team has had over the past four seasons. Estes, along with assistant coaches; Jeff Fussell and Adam Fussell, have managed to steer the squad near the top of the National rankings each of the past four seasons. There are 16 teams from five different states participating in the Grand Slam World Series. The Travelers will face off against the Bay Tornadoes of Panama City in Game one of the tournament and will follow up with a contest against the Central Alabama Nationals from Birmingham, Ala. to wind up pool play, Bracket play begins on July 27.