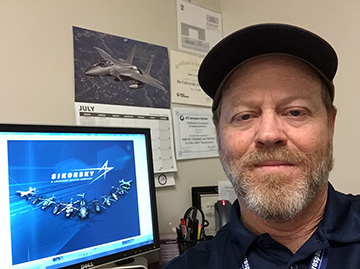 James Steward graduated from South Georgia Tech in 1979 in aviation maintenance and has a great career in the industry for over 37 years.

AMERICUS — “I have truly been blessed from the moment I graduated from South Georgia Technical College (SGTC),” said James A. Steward, Lockheed Martin Sikorsky Division Quality supervisor, who has over 37 years of experience in the general and commercial aviation industry, and is a graduate of the South Georgia Tech aviation maintenance program.  “I am eternally thankful for my South Georgia Tech instructors Frank Gassett and Thomas Munn and the knowledge they shared with me.”
Steward, who is also an FAA licensed pilot, said that an excerpt from the poem called “The Forgotten Man” by World War II, 1st Lt., Joe E. Seward, sums up how he feels about his chosen profession. The poem excerpt begins, “Now pilots are highly trained people, and their wings are not easily won, but without the work of the maintenance man our pilots would march with a gun. So when you see mighty jet aircraft marking their paths through the air, Remember the grease-stained man with the wrench in his hand, he’s the one that put them there.”
Steward graduated from the SGTC aviation maintenance technology program in 1979, one day before his 19th birthday. Three weeks later he had completed the Federal Aviation Administration required written, oral, and practical testing to obtain his FAA Airframe and Powerplant License.
With his diploma and his FAA Airframe and Powerplant License, Steward began his career as a large commercial aircraft periodic check hangar mechanic with FAA Part 121 US Major Air Carrier Republic Airlines.
Republic Airlines was the formation of a merger between Southern Airways and North Central Airlines. Republic also purchased Hughes Air West and then merged with Northwest Orient to form Northwest Airlines. Northwest Airlines has since merged into Delta.
During his 26 years of employment with those companies, Steward held mechanic positions in the hangar, on the Atlanta flight line, Atlanta jet engine overhaul shop, field service, and Minneapolis jet engine overhaul shop. He also held quality inspector positions in the Atlanta jet engine overhaul shop and spent three years with Northwest Airlines in Minneapolis.
“It was just too cold in Minneapolis for this Georgia boy,” said Steward, “so I resigned and returned to Georgia to work for Pratt & Whitney Columbus Engine Center where I was a quality inspector for six years.”
Steward is now with Lockheed Martin, Sikorsky division, as a quality supervisor. He is also the Designated Quality Representative (DQR) for original equipment manufacturer Hamilton Sundstrand.
“This has been a great life for the past 37 years and I owe much of it to South Georgia Technical College and my instructors,” said Steward. “I am thankful for the training and the knowledge that I received. I have been able to earn a living and also excel in this field. I enjoy what I do so much that I really hope to work in this industry for at least another 10 years.”
In addition to this FAA A & P license that he earned at South Georgia Tech, Steward also holds a FAA Private Pilot license, the four disciplines of non-destructive testing certifications and the DQR license.
“I almost applied to become an instructor at South Georgia Technical College several years ago,” laughed Steward. “I regret not doing that, but who knows, I may still look into the possibility of becoming an aviation maintenance Instructor one day.
“I am not sure I have the patience that Frank Gassett and Thomas Munn had with me, but I am certainly glad that they did,” added Steward. “This is a great industry and it has been a great life. I would encourage anyone who is interested in aviation maintenance to pursue this as a career and to contact South Georgia Technical College for their education.”