Rally attendees were asked to link arms with those around them to show unity for law enforcement.

AMERICUS — A crowd of about 200 people braved the sizzling summer sun and humidity Saturday morning at a rally designed for prayers, support of law enforcement and other emergency workers, and to bring the community together.
Local citizen, Gail Wall, organized the event which ended with everyone linking arms and thanking all the public service personnel present. 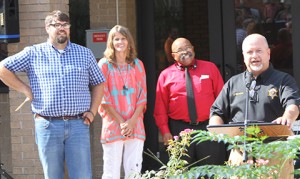 From left are the Rev. Chris Wooden, organizer Gail Wall, the Rev. Matt Wright, and the Rev. Bud Womack.

Four ministers prayed and/or spoke. First up was the Rev. Bud Womack, who spoke of the need for respect for authority in today’s society. As a minister, he said he believes, preaches and teaches that every life is equally important, “from those who are born even to those who are unborn … I don’t believe anyone — white, black, Hispanic, Asian or any other race — should feel like they’re superior to or less than anyone else. That’s why we’re here today. We’re here to pray for our law enforcement officers mainly because of the attacks on them over the past several months.”
Womack said that he has served as a law enforcement chaplain for the last 12 years with the Sumter County Sheriff’s Office and for the last nine months with the Georgia State Patrol.
“I’ve had the opportunity to not only talk with or ride with or be around a lot of officers and even those from different departments, and those times have been a lot of laughs, and sometimes we’ve shed some tears together.”
Womack said there was one common prayer request that he got from those officers, and that was to pray that law enforcement make a positive difference in the area they were in and the job they were doing.
He said he’s heard what these officers are called and has seen their paychecks; many having second or third jobs. He said he shook their hands, hugged them and cried with them at times. “I’ve never met one law enforcement officer who did their job because of the pay or the benefits. Rather they simply wanted to make their community safe … for their family and our family to live in and grow up in.”
He told of his family’s recent vacation to Disney World in which everyone obeyed the signs and rules. He said he wished our world operated as smoothly. “We had rules and people that enforced them, and while everyone else stood around, the problem got solved. Then they went back to enjoy their fun.”
He quoted scripture, Psalms 133: 1, “How wonderful and pleasant it is when people live together in harmony.” But he asked, “how’s that going to work?” With differences in race, employment, background, how will it work? He also quoted 11 Chronicles 7:14, “If my people who were called by my name, will humble themselves … and pray and seek my face and turn from their wicked ways, I’ll hear from heaven; I’ll forgive their sins and I’ll restore their land.”
“If we want a better America, if we want a better Americus, if we want a better state, if we want a better school system, if we want better law enforcement, if we want a better anything, it will only come when we pray and do it God’s way.”
Matt Wright, president of the Americus-Sumter County Chapter, NAACP, and also a minister, spoke next. He said it was good to be there with his friends from the community.
“We’re living in a time when … everything’s going its own way. And the reason is because there has been a great falling away from obeying what God has laid out for us to do. We come from a nation where it was founded on ‘in God we trust.’ There has never been a nation that has ever been born out of so much of a desire to do the will of God and then set moral standards, which were in our Constitution that mirrored the Ten Commandments.”
Wright lamented that we have become a nation that is “hedonistic” where “we are now turning all our attention, everything we’re now doing, is against what God has laid for us to do.” He said God laid it out for everyone, for “each and every one of you.”
“… On that great day, when it comes, it’s going to be some of all us there because there’s some good people in every race, and there’s some bad people in every race.” 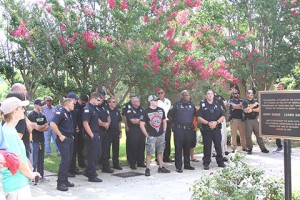 All law envorcement, firefighters and EMS personnel present were asked to stand in the shade and be thanked by the rally attendees.

Wright talked of the time when Noah was building the ark and warned of coming rain if people didn’t get back on the right moral track. “We’re living now where it says it’s OK to kill a baby while he or she is still in the womb. When you allow that to happen on a daily basis, then you have moved away from God because that is murder when our justice system says it’s OK …”
“… God says, ‘you didn’t want me there’ … and when God stepped back … we’ve got all these shootings … coming so regularly that it’s not even shocking anymore,” he continued. “Anything can be expected when you’re living in a society that has no moral values and no moral standards.”
Wright also condemned transgendered people being able to go into men’s and women’s restrooms.
“This is where we are. This is real stuff. This is happening every single day and we keep doing different things … selling alcohol on Sunday,” he said. “God says remember the Sabbath and keep it holy. Somethings we need to hold onto. … That’s one of the things we could do so easily by just voting no. At least we can make them drink on a day that doesn’t belong to the Lord.”
Wright returned to Noah who predicted rain, and it had never rained before. “People probably thought Noah was foolish because it has never rained before,” he said. “Noah built his ark on a mountaintop and the people said it would never rain that much.”
“Jesus says that He’s coming back,” Wright preached. “Looking not for just a race of people but … He’s coming back looking for people who are called by His name, and if we’re going to called by His name, then we’ve got to start living like it and start acting like it.”
Wright said “they” have given him a bad name because he’s president of the NAACP, but in the crowd he saw many people he’s known for 30 years.
“They will tell you that I love God and I don’t live by a standard of what Matt Wright thinks is right; I live by a standard of what Matt Wright believes God says is right.”
Wright said he wants this community to be a community of one because he loves and cares about each and every one. He urged service from all to all. “Until we get together and start serving each other, caring about each other’s needs …  We have to truly get back and … get back to doing what thus says the Lord. Until we turn back to what God says do we will never be that great city on a shining [hill] … We have to address this racial divide. We all know it’s here but we kinda look at it with blinders on. But we have to do it … I want to encourage each and every one of us … to do it the way God said to do it … until we can get to where we love each other … and want to help each other … Americus has been blessed that we don’t have the same problems we have nationally and we don’t want that kind of problem in Americus and Sumter County … the goal is to pray that it never happens here and with a goal to live as one in this community.”
The Rev. Chris Wooden also spoke and prayed, and the Rev. Jerry Roe offered a prayer as well.