From the Southland Academy 1986-87 yearbook: Members of the 1986 Raiders football team gathered at what was then named Raider Field for a group photo prior to beginning the team’s season.

From the Archives: Taking a journey through the Southland Raiders’ historic 1986 football season; part 1

Editor’s Note: As Americus Times-Recorder readers likely know, we, at the ATR, are very proud of our area’s rich tradition of sporting excellence. Most recently, in our celebrations of the history of Americus and Sumter County’s athletes’ prowess, we have shared archived articles on several historic teams from Americus High School.
In this series, however, we will be discussing Southland Academy’s epic 1986 football season, in which the Raiders capped off a five-year streak of region championship victories to win the Academy’s first state football title. Though the Raiders would go on to win two more state football crowns throughout the following decade, it’s safe to say that the team’s first title victory was a very special accomplishment for the team and the school.
Going through the ATR’s archives, I have found a bounty of articles detailing the Raiders’ rise to the top, most of which were penned by then-ATR sports editor, Ron Evans.
At the beginning of the season, according to reports, the Raiders were thought to be a team in transition, as the school had lost several talented players from the previous year. By the end of the team’s first match-up, head coach Loveard McMichael, along with the rest of the team’s coaching staff and fans, knew that they were onto something special. Just how great the team would turn out to be, however, remained to be seen.
———————————
During the week of August 24-30, 1986, the front pages of the Times-Recorder’s issues were peppered with tragic news stories; including articles on Lybian leader, Moamar Gadhafi’s alliances with the now defunct USSR, fanning the flames of the cold war; the death of legendary sculptor, Henry Moore; the hijacking of Pan Am flight 72 by Palestinian terrorists; and a series of articles on the burgeoning crack cocaine epidemic that seemed to be growing more troublesome in the United States each day.
Inserted into the August 27, 1986 edition of the ATR, however, was a breath of fresh air for local sports fans; the newspaper’s football preview. The preview included updates on what football fans could expect to see on the gridiron in the coming months, whether it be in person on Friday night or on the television over the weekend. The edition included interviews with several athletes and coaches who had once called Americus home, and many who still did, ranging from big names in the NFL like Kent Hill (an Americus who was preparing to enter his seventh season with the Los Angeles Rams), to Jimmy Hightower, a former Americus High School football coach (certainly no stranger to state championship victories) who was, by that point, working as the head coach for Georgia Southwestern College’s football team. 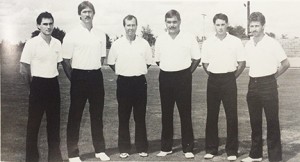 The preview also included a breakdown of what local fans might expect from the Southland Raiders.
Portions of this interview are shared below.
———————————
McMichael optimistic in rebuilding year