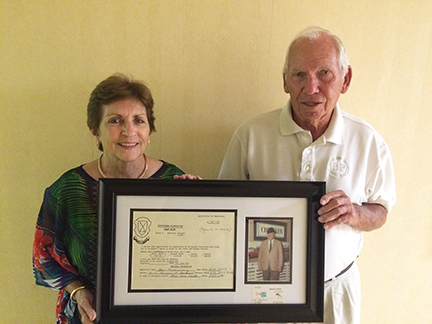 AMERICUS – The Brickyard Plantation’s first member was recently presented the club with a very special gift.
According to a press release recently received by the Times-Recorder, Ike Treadaway was the club’s first member, joining shortly after the course was opened in 1979.
Treadaway’s daughter, Sandra Treadway Smith, recently presented to Billy Clark, the owner of the Brickyard Plantation, her father’s certificate of membership to be displayed in the clubhouse.
Clark recently spoke with the Times-Recorder about the club’s acquisition, saying, “[Treadaway] was a loyal member of the club until his death. [Sandra] wanted to honor her father by presenting us with the plaque. I told her we’d be more than happy to display it for everyone to see.”