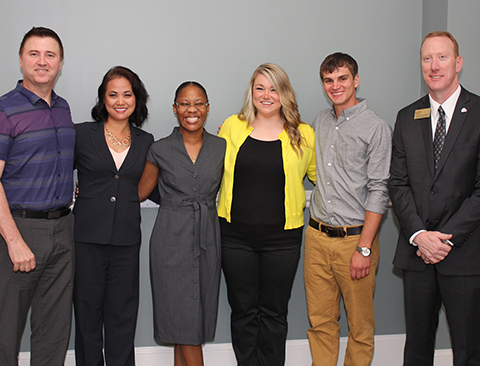 AMERICUS — Georgia Southwestern State University’s School of Nursing recently honored their first six graduates of Family Nurse Practitioner (FNP) master’s program. Shaun Cook of Albany, Elizabeth Fussell of Americus, Trent Peachey of Shellman, Gail Ricker of Leesburg, Kayota Tolbert of Saint Marys and Larry Tyrer of Americus are the members of the inaugural class.
All six of the graduates, who completed their prerequisite work at Georgia Southwestern, are leaving the program with FNP job offers.
“We are so proud to see our inaugural FNP class graduate and move into the front-line of supporting health care throughout Georgia and beyond,” said GSW president Charles Patterson.
Approved by the Board of Regents in October 2014, the master of science in nursing (MSN) with a major in FNP started in January 2015, in collaboration with Columbus State University. The program, which is completely online, consists of 44 semester hours and requires 765 clinical hours, which are completed in facilities with preceptors.
“Through course work and clinical study at sites near their homes, GSW works closely with each student to ensure they are prepared for their roles as FNPs,” said Mary Anne Shepherd, director of the FNP program.
“Georgia will benefit from this program as family nurse practitioners provide high quality health care services across the state often in medically underserved areas,” Shepherd added.
The FNP degree is the fourth MSN major offered completely online through GSW’s collaboration with Columbus State. Degrees in nursing education, leadership/administration and informatics are currently offered.
“Since the first six students were admitted into the program in Spring 2015, the number of students tripled in Fall 2015, and have now doubled again for Fall 2016,” said Bonnie Simmons, graduate program chair at the School of Nursing. “We are looking forward to further growth in all of the MSN program tracks, and we are thrilled with these first six FNP graduates representing GSW.”
The Georgia Southwestern State University School of Nursing was recently ranked 38th in the nation on a list of the “Best Online Nursing Programs” by AffordableCollegesOnline.org (AC Online) in its third annual ranking. Georgia Southwestern was among five universities in Georgia that made the list. Southwestern’s Master of Science in nursing program is ranked 45th out of the 50 best graduate nursing programs in America by topmastersinhealthcare.com.
For more information visit www.gsw.edu/admissions/graduate/school-nursing

By MICHAEL MURRAY michael.murray@americustimesrecor der.com AMERICUS — The Sumter County Board of Commissioners met for its monthly work session on... read more