From the Archives: Taking a journey through the Southland Raiders’ historic 1986 football season; part two 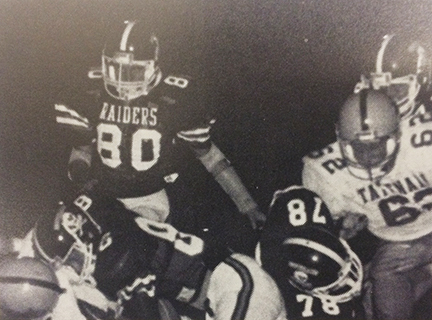 From the Southland Academy 1986-87 yearbook: Members of the 1986 Raiders scramble to take down a Tatnall Square opponent during the teams’ September 12, 1986 match-up.

Editor’s Note: We, at the ATR, are very proud of our area’s rich tradition of sporting excellence. Most recently, in our celebrations of the history of Americus and Sumter County’s athletes’ prowess, we have shared archived articles on several historic teams from Americus High School.
In this series, however, we are taking a trip down memory lane to talk about Southland Academy’s epic 1986 football season, in which the Raiders capped off a five-year streak of region championship victories to win the school’s first state football title. Though the Raiders would go on to win two more state football crowns throughout the following decade, it’s safe to say that the team’s first title victory was a very special accomplishment for the team and the school.
Going through the ATR’s archives, I have found a bounty of articles detailing the Raiders’ rise to the top, most of which were penned by then-ATR sports editor, Ron Evans.
In our previous installment of this series, we discussed the Raiders’ initial pair of victories; a 27-12 win over Savannah Christian and a proper thrashing of the prior year’s state champs, First Presbyterian Day School, by a margin of 21-7.
With these victories under their belts, the Raiders were well on the way to establishing themselves as the force to be reckoned with on the gridiron for that year. Following their toppling of FPD, the team eagerly began preparing for their next match-up against Tatnall Square.
—————————-
There was a lot going on in national news in the first half of September 1986. As the Cold War raged on, the front pages of the ATR were peppered with articles on Ronald and Nancy Reagan’s “Just Say No” campaign, the appointment of Antonin Scalia to the United States Supreme Court, as well as William Rehnquist’s promotion to Chief Justice of the same court, and the arrest of American journalist, Nicholas Daniloff, who had just been arrested in Moscow on espionage charges.
In local news, during that time, local businessman, Larry Comer, had just announced that he would soon be opening the boat manufacturing company that would eventually be known as Caravelle. Another local manufacturing giant, Davidson Exterior Trim, had just announced the first in a series of massive layoffs that would continue well into 1987, and the Americus Police Department was investigating the shooting of a recent AHS graduate outside of the Domino’s Pizza restaurant.
Interspersed in the ATR’s sports pages were articles on local athletes, notably Southland cornerback, David Roach, who had recently been named the ATR’s Defensive Player of the Week, and Americus native, Kent Hill, who had just been traded to the Houston Oilers by the Los Angeles Rams.
In every Thursday edition, however, the ATR dutifully printed articles anticipating the following day’s gridiron action. Two days later, like clockwork, the newspaper’s sports section would include an article on yet another Raider victory.
On Sept. 11, 1986, the Times-Recorder included an article titled, “Southland meets Tatnall after long wait”, written by then-sports editor, Ron Evans.
A portion of this article is shared below.
Southland meets Tatnall after long wait
By RON EVANS
Sports Editor

“It’s been a while since Southland Academy and Tatnall Square teed up against each other. In fact, it’s been two years. The last meeting was a 14-8 win for the Raiders in the state playoffs in 1984.
“This meeting could be a preview of something to come in this year’s playoffs…”
The article went on to say that the Trojans would be led by a trio of three-year starters in the upcoming tilt; fullback, Brannen Veal; tailback Butch Bryan; and quarterback, Rob Warnick. Evans continued, saying that the Trojans had entered the season as a number-one pre-season pick, but the Raiders had cinched that spot with their convincing season-opening victory against Savannah Christian.
“’Offensively, Tatnall is an option and semi-roll-out passing team,’ said [Raider Head Coach, Loveard] McMichael. ‘Defensively, they run a five-man front similar to Savannah Christian, but a lot tougher.’
“Southland’s standouts last week were lineman Chip Sanderlin and linebacker, Drew Gay. Sanderlin, usually an offensive tackle, went both ways and turned in a fine performance at defensive tackle as well,” the article continued. “Gay is coming back from a broken thumb and registered one big tackle to stop an FPD drive and made other big hits.
“Other top Raiders were quarterback, Stephen Summers, Bud Harrod at nose tackle, and running back, Chan Reeves…” 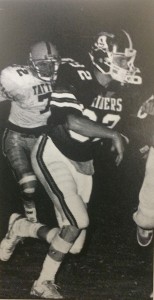 From the Southland Academy 1986-87 yearbook:
A defensive back from the 1986 Raiders football team presses forward in pursuit of a Tatnall Square for on Sept. 12, 1986.

With the stage set for an exciting showdown, the two teams hit the field at Raider Stadium in Americus the following evening, both determined to bring home a win.
When the dust from the contest had settled, Southland fans were delighted at the sight of the scoreboard, which registered a whopping 48-0 victory for the home team.
The game’s action was detailed the following day in an ATR article titled, “Reeves runs over defenders as Raiders blank Tatnall Square” by ATR sports writer, Mike Mead.
“Friday night was Chan Reeves night at Southland,” the article began. “The senior running back rushed 171 yards in 14 carries and scored two touchdowns as the Raiders waxed the visiting Trojans of Tatnall Square Academy 48-0…
“Reeves had a big night which included two pass receptions for 21 yards and a punt return that resulted in a TD. He scored the Raiders’ first TD in the opening quarter. The Raider back capped a nine-play drive with an 11-yard run and showed his speed later on in the second quarter when he returned a punt 53 yards to build Southland’s lead to 18-0.
“’I was really a little surprised at them,’ said [McMichael] of Tatnall, who was top-ranked in some pre-season polls. ‘We did what we wanted to do – We got after them early. I was really pleased overall with our performance.’
“The Raiders… pretty much had their way with the Trojans. While the offense rolled up 398 yards, the defense applied pressure to the Tatnall quarterbacks which resulted in four interceptions; two by Jake Reeves. Meanwhile, the Trojans mustered up just 127 yards of total offense.
“Raider quarterback, Stephen Summers, added to Southland’s scoring with three touchdowns. His first came early in the second quarter when he hit Brad Pope with a six-yard TD pass to end a six-play, 48-yard drive. With two seconds left before the half, Summers scored again, this time on a run which covered 39 yards. After missing their first three conversion attempts, the Raiders connected on the two-point play and led comfortably with a 26-0 halftime advantage.
“McMichael was able to get a good look at his reserve troops during most of the second half. The Raiders got on the scoreboard early in the third quarter when Summers scored from a yard out to cap a short, three-play drive set up by a 55-yarder by Reeves with 9:53 left.
“Four minutes later, Southland’s defense came up with a score as David Roach intercepted a Rob Warnock pass and returned it 52 yards to put the Raiders way out in front, 40-0. The team’s final score came in the final quarter with Jake Reeves scoring from five yards out to end an eight-play drive…”
Just like that, the powerful Southland squad had logged their third victory of the season. The following Thursday, on Sept. 18, 1986, Evans printed an article giving some insight on the team’s victory over Tatnall, as well as detailing the team’s preparations for their upcoming bout against Mt. DeSales.
The writing, titled, “McMichael has some kind of secret for Southland Academy’s Raiders”, began, “Whatever the secret is, Southland Academy Coach, Loveard McMichael, sure hopes that it doesn’t get out to the rest of the state’s teams.
“For three straight weeks, Southland has completely demoralized some of the top three teams in the Georgia Independent School Association’s Class AAA. This week, it’s Mt. DeSale’s turn at Raider Stadium on Friday night.
Evans detailed the Raiders’ previous three victories, saying that the Southland crew had won each of their previous games, averaging 35.3 points per match, while holding their opponents to an average of only 6.3 points.
“This was supposed to be a less-than-awesome team compared to last year’s Raiders,” the article continued. “’I don’t know what it is. I don’t know if we’re that good, or what,’ said McMichael. ‘We had a real good game against Tatnall Square. We dominated both sides of the line. And if we keep improving, we could be as good as last year.’
“Bud Harrod turned in another sterling performance at nose guard and also at offensive guard.”
McMichael also praised the entire offensive line for their effort against Tatnall… and the article sang the praises of Ray Clark, who had handled kicking chores for the Raiders and sent a pair of kickoffs through their opponent’s end zone. McMichael was also quoted as saying that the team’s defensive line had done a great job of putting pressure on Tatnall’s quarterback, forcing him to throw a total of seven interceptions.
“As for Mt. DeSales,” the article continued, “McMichael knows them well. Last year, the Radiers won the contest 35-7 in Macon.”
——————————–
With another win on the record books, the Raiders would have soon continue their training before hitting the road on Sept. 27 to take on the Mt. DeSAles. Be sure to visit us next week as we continue to pore through our archives and discuss more of the Southland Raiders’ epic 1986 football season. When we resume, we will share articles from the Times-Recorder on the team’s substantial victories over Mt. DeSales and Westwood.
We are very interested in hearing from the team’s fans and players from the 1986 season. If any fans or former players would like to contact us and share insights into and memories of this exciting season on the gridiron, please feel free to call our office during business hours or email ATR sports editor, Michael Murray, at michael.murray@americustimesrecorder.com. We look forward to hearing from you.