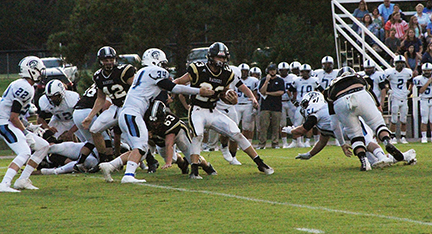 Michael Murray/Americus Times-Recorder: Southland’s Parker Weldon attempts to break away from an SGA defender as his teammates make a hole in SGA’s line.

AMERICUS – The Southland Academy overcame a sluggish first half in their season opener against the Southwest Georgia Academy (SGA) Warriors on Aug. 12 to score 26 points in the second half and bring in a 28-8 victory.
The Raiders received the initial kickoff, taking first possession on their own 40. The home team pressed forward on a seven-play, 34-yard drive, highlighted by a 24-yard carry by running back, Logan Morris. With the help of a flagged play, in which Townsend Ray took off down the left side for what would have been a significant gain, the Warriors were able to force the Raiders to punt.
The Raiders responded in kind on SGA’s return drive, holding the visitors to only 11 yards on their six-down return drive. The Raiders finally lit up the scoreboard when a flagged punt attempt and a botched snap resulted in a safety for the Raiders, putting the home team up 2-0 halfway through the first quarter.
The Raiders then trekked back up the field, propelled by a 12-yard run by Morris, followed by a completion to the same player by quarterback, Alex Roach. From their opponents’ 20, the Raiders were held off through a full set of downs, capped off by a hard sack by an SGA defender to force the Raiders to relinquish the ball at the 33 yard-line.
The Raiders would soon get the ball back, however, thanks, in part, to a pair of hard tackles by Hunter McCain and another by Parker Weldon, forcing their foes to punt after only four downs.
With the ball back in their hands, the raiders maintained possession until the end of the quarter, turning over possession in midfield with only 12 seconds left on the clock.
SGA took off on a 38-yard drive that spanned 10 plays and ate up several minutes of clock time. Their progress was stunted by an expert sack from Southland defensive lineman, Morgan Younngdale, combined with defenders, Hunter McCain and Chandler Studdard pressuring the visiting quarterback to throw the ball away on two separate occasions, coupled with hard stops by Southland’s Brody Shattles, Saige Batten, and Morris.
The teams traded possessions twice more before retiring to the locker room for the halftime break.
The action really kicked up in the third quarter, as the teams traded possession twice in three plays, due to a pair of fumbles. Two drives later, the Raiders’ Ray recovered a fumble and set in motion a 17-yard push that ended with him heading down the right sideline for a nine-yard touchdown to put the Raiders up 8-0.
SGA answered on their return drive with a five-play drive, culminating with wide receiver, Parker Weaver pulling down a long bomb for a 56-yard touchdown run. SGA quarterback, Austin Pickle, found a receiver in the end zone on their two-point conversion attempt to tie the score 8-8.
From there, it was all Southland. On the second play of their next possession, Ray caught a short pass and broke through, leaving defenders in the dust as he made a 64-yard trek into SGA’s end zone to give the Raiders an advantage that they would carefully guard for the remainder of the game.
After the Raiders’ defense held SGA to only four downs on their return, it was Southland running back, Clay Owens’ turn to light up the scoreboard 45 seconds into the final frame. Owens dragged a pile of defenders nearly 20 yards into the scoring zone from SGA’s 32-yard line. Raider place kicker, Zane Hines then deftly split the goalposts to give the Raiders a 21-8 edge.
Eight minutes later, Southland’s Stephen Taggart took his turn, capping off a 65-yard, eight-play drive with a touchdown run, dragging defenders behind him for the last 10 yards of the rush.
The drive was aided by a run from running back, Parker Weldon, who helped put the Raiders in scoring territory by recovering immediately from an audibly hard hit to bring the ball to SGA’s 16 yard-line. Taggart, Owens, and Morris each contributed significant yardage to the drive as well. Once again, Hines expertly nailed the point-after kick to bring the game’s final score to 28-8.
SGA made a final stand in the last minute of the game, pushing the ball perilously deep into Southland’s red zone. Raider freshman, Adam Smith, was able to completely negate the threat with a swift interception, which he immediately ran back to the 50 yard-line to put the game away.
In total, the Raiders tallied 297 yards in the match, 24 of which came through the air. Southland held SGA to only 184 yards in their opener, with 122 gained from passes.
Ray set the pace for the Raiders with 98 yards on eight carries while Owens toted the ball eight times, contributing 78 yards. Morris added another 53 yards to the Raider cause, handling the ball nine times. Weldon, Taggart, and Shattles each contributed yardage as well.
Roach connected on three passes for the Raiders, with Batten on the receiving end of two, while Morris pulled down the third.
Southland will return to action on Aug. 19, traveling to Perry to battle Westwood before hitting the field once more at Harvey Simpson Field in Americus to take on Westwood on Aug. 26.