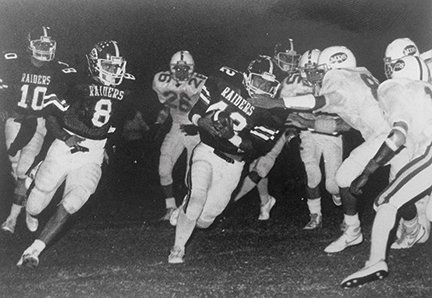 From 1986-87 Southland Academy Yearbook: A Southland running back plows his way through a sea of defenders during a 1986 contest against the Mount DeSales Academy Cavaliers.

From the Archives: Taking a journey through the Southland Raiders’ historic 1986 football season; part 3

Editor’s Note: We, at the ATR, are very proud of our area’s rich tradition of sporting excellence. Most recently, in our celebrations of the history of Americus and Sumter County’s athletes’ prowess, we have shared archived articles on several historic teams from Americus High School.

In this series, however, we are taking a trip down memory lane to talk about Southland Academy’s epic 1986 football season, in which the Raiders capped off a five-year streak of region championship victories to win the school’s first state football title. Though the Raiders would go on to win two more state football crowns throughout the following decade, it’s safe to say that the team’s first title victory was a very special accomplishment for the team and the school.

Going through the ATR’s archives, I have found a bounty of articles detailing the Raiders’ rise to the top, most of which were penned by then-ATR sports editor, Ron Evans.

In our previous installment of this series, we discussed the Raiders’ third win of the year, a 48-0 shutout of Tatnall Square. We then shared an ATR article on the team’s upcoming match-up against Mount DeSales Academy (MDS) of Macon, which would turn out to be the first of two bouts that the teams would engage in during that season.

In mid-September of 1986, the sports world was abuzz with news of the Atlanta Hawks’ recent signing of a small, but scrappy point guard, the 5’6” Spudd Webb. The New York Mets’ owner had put the team on the market, reportedly with a $100 million asking price. In national news, the country’s drinking age had just been raised from 20 years old to 21, and the NCAA had just announced their newly-instituted drug testing policy for student-athletes. The local news section of the ATR was full of articles on the Georgia House of Representatives’ plans to establish a National Historic Site in Plains, the home of former president, Jimmy Carter, and the local seizure of over $7,000 in crack cocaine by the Americus Police Department.

Once again, in their fourth match-up of the season, the Raiders delivered a savage defeat to their foes in Americus in the form of a 31-7 thrashing.

“The Southland Academy Raiders overcame a sluggish start to hammer the visiting Cavaliers of Mt. DeSales 31-7 last night…,” the article stated. “The number-one ranked Raiders extended their record to 4-0 on the year.

“Southland did not come out as explosive as usual as the Raiders did not score until their third drive of the game just before the end of the first quarter.

“It took the Raider defense to [start] up the team’s scoring machine. A drive-stopping interception and a fumble recovery set the Raiders defense in motion towards another big night.

“’Their defense was tougher than last week,’ said [McMichael] of the Cavaliers. ‘Our defense shut them down on the pass and run.’

“Mt. DeSales looked as though they might give the Raiders a good fight early in the ballgame. After a lackluster opening drive that only covered three yards, Southland punted the ball to the Cavs where they started from their own 38.

“The Cavaliers mounted a serious drive in nine plays down to the Raiders’ five. Faced with a fourth-and-goal situation, Mt. DeSales quarterback, Brad Scott, threw to the end zone, but instead, found Southland’s Doug Davis.

“Following another unproductive possession, the Raiders finally came alive when Southland’s Johnny Greene recovered a bad pitch from Scott to his running back, Chuckie Stinson at the Cavs’ 32. The Radiers’ offense, led by Stephen Summers, marched down to the goal line. Within six plays and with 18 seconds left on the clock, Summers plunged over from a guard out to give the Raiders the lead.

“The Raiders went on to dominate from that point on.

“Southland lit up the scoreboard twice in the second quarter. Jeff Rix capped a seven-play drive when he scored on a 19-yard pass from tailback Chan Reeves at the 8:14 mark of the quarter.

“Almost six minutes later, Reeves was on the receiving end of a 25-yard touchdown pass touchdown pass from Summers to end an eight-play drive and give the Raiders a comfortable 21-0 halftime lead.

The Raider defense, after the Cavs’ initial drive, bottled up Mt. DeSales’ running game. McMichael credited Greene for filling the middle while at middle guard. ‘Johnny had a good night stopping up the middle,’ said McMichael.’

“McMichael also cited David Roach for his play at corner back and Ray Clark for his kicking game. The senior who also plays guard has had a consistent kicking game for the Raiders this season and booted one of his own kicking records.

“At the halfway point of the third quarter, when a Raider drive stalled out at the 34, Clark went in and line-drove a 51-yard field goal to lengthen Southland’s lead to 24-0. The 51-yarder broke Clark’s longest field goal mark set last year, of 50 yards.

“Another fumble recovery following the Clark field goal in the third quarter by the Raider defense on the Mt. DeSales 27 set up the squad’s final score of the contest. In just three plays, Reeves took the ball up the middle for an 18-yard TD run.

“The Cavs’ score came early in the fourth when Chris Sutton galloped 33 yards to end an eight-play, 65-yard drive.

With their latest win under their belts, the Southland squad took a hard-earned bye week the following Friday, in which they could rest and prepare for their highly-anticipated match-up against the Westwood Wildcats.

On Sept. 26, 1980, Evans penned an article in the ATR to give local fans an idea of what to expect in the upcoming tilt, titled, “McMichael putting Raiders through hard workouts for ‘Cats”.

A portion of this article is shared below.

“The Southland Academy Raiders could be in danger of a letdown against this week’s opponent, Westwood of Camilla…

“The Raiders (4-0) have played four of the supposedly toughest teams in the Georgia Independent School Association’s Class AAA, including Savannah Christian, First Presbyterian, Tatnall Square, and Mt. DeSales… and have come away a winner each time. In those games, the Raiders have averaged over 34 points per game while giving up just 6.5.

“‘It could be a letdown game, but we’ll work hard this week to keep it from being one,’ said McMichael.

McMichael is also using the past record as a basis for not letting down against Westwood (1-2-1). ‘We know, from the past, that they tough,’ he said. Southland won last year’s meeting, but by a score of 34-22.

“They’ll probably hit us defensively and they will probably be fired up for us,’ said McMichael, pointing to the Raiders’ number-one ranking.

“Offensively, the Wildcats have Shane Brunson, a 177-pound junior, at running back. ‘He is a tough runner,’ said McMichael. ‘They also can throw the ball well. Last week, I a tie with Valwood (6-6), they threw the ball 18 times, completing seven and dropping four.’

“The Raiders are in fair shape for heading into the fifth game. Fullback, Paul Kim, is nursing a slight sprained ankle, but a big loss is downed lineman, Bud Harrod, who will be out for some time with mononucleosis.

When Friday rolled around, the Raiders hit the field in Camilla to battle the Wildcats, earning another comfortable victory despite Evans’ assertions that the contest might result in a letdown for local fans. In fact, it was quite the opposite, as Southland’s boys had kept their supporters on their feet through the entire match as they barreled their way to a huge victory.

On Sept. 28, Evans published yet another victory article on the Raiders’ most recent success dubbed, “Raiders romp past Westwood”.

“Southland Academy’s Raiders are having a big shindig,” the article began. “And it’s a closed one at that.

“The most recent party Saturday night saw the Raiders party all over the Westwood Wildcats 36-8.

“In five games thus far this season, the 5-0 and number-one ranked Raiders… have averaged 34.6 points this season while giving up 6.8. This was supposed to be somewhat of a rebuilding year for Southland after watching 16 seniors get their walking papers.

“‘We are a closer team. We lost some good players but we have some good ones to fill in’ said senior tailback, Chan Reeves, who had a pretty good night rambling for 169 yards on 14 carries for three touchdowns of 45 and 65 yards. He also added a touchdown interception of 22 yards and tacked on a two-point conversion for good measure.

“‘We’ve got some good seniors’, agreed senior quarterback, Stephen Summers, who has played admirably this season, moving over from last year’s position of split end. ‘We have good senior leadership. Last year, there were some groups on the team. Nothing bad, but we are closer as a whole team this year.’

“The Wildcats are a Class AA team with a now 1-3-1 mark, proving that nothing but Class AAA competition this season might have had thoughts of a party themselves…

“As it was, the Raiders wreaked havoc on the ‘Cats, causing six fumbles, taking five of them and stealing three interceptions.

“Chief thief, however, was David Roach. The senior cornerback recovered two fumbles and intercepted one pass in the first half as the Raiders could only stake a 14-0 lead. Roach also played well on offense, carrying the ball six times for 51 yards and he punted the ball four times for a 37-yard average.

“Southland got on the scoreboard first after Roach recovered a Wildcat fumble at the 30 of Southland. From there, it was five plays later as Reeves broke off left tackle for a 45-yard touchdown romp with 6:12 to play in the first. Ray Clark’s kick was wide left.

“The next score came at the benefit of a wide snap over Westwood’s punter and the Raiders took over at the 15 of the hosts. Again, five plays later, Reeves scored, this time from the three. The two-point conversion was good from Summers with 2:21 left in the half.

“‘We were kind of flat coming out for this game,’ said… Loveard McMichael. ‘We knew that they would be scrappy, but it looked like we had to get into the game to find that out. We played like we are supposed to in the second half.’

“The Raiders, for all practical purposes, ended the game by taking the opening kickoff of the second half 76 yards in nine plays, ending with Summers finding Reeves out of the backfield for a 22-yard touchdown with 8:14 left. Clark’s kick was good this time and it was a matter of running out the clock.

“Reeves made it 28-0 on his next carry, going 63 yards and the last touchdown was a four-yard run by cousin Jake Reeves.

“But Chan Reeves wasn’t through yet. On the extra point attempt of the final touchdown, the snap bounced to the feet of Clark, who picked up the ball and tossed a wobbling pass to Reeves for the two-point conversion. “When it’s going your way, it’s going your way.

“Westwood finally scored with eight seconds left in the game as Shane Brinson plowed over from the four and then added the two-pointer.

With their fifth win in the record books, the Raiders were on a roll and showed no sign of slowing down any time soon. Be sure to visit us next week as we continue to delve into Southland’s awesome 1986 season and share excerpts from an interview with then-school headmaster, Melvin Kinslow. As always, the ATR would like to hear from former players and fans of Southland’s 1986 team. If you would like to share your memories of this epic season in a brief interview, please feel free to contact our office during business hours at (229)924-2751 or email the ATR’s sports editor at michael.murray@americustimesrecorder.com. We look forward to hearing from you!

From STAFF REPORTS The Georgia Sparks finished the second half of the college exposure season with a 4-1 record in... read more