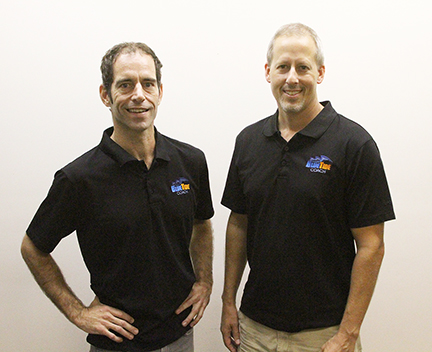 AMERICUS – With the Summer Olympics in full swing and people the world over discussing the performances of champion swimmers, the Americus Blue Tide (ABT) has decided to add a very experienced former team member to its coaching staff.

Will Peak, who is a former junior and senior national competitor, and still holds records for his performances as a young swimmer at Southland Academy, will be joining Coaches Tim DeMott and Jordan Brown in training local youths in the art of competitive swimming.

Peak and DeMott recently sat down with the Times-Recorder to discuss the new appointment and the organization’s plans for the future.

Asked about his past competitive swimming experience, Peak told the ATR, “I began swimming at age six. I taught myself how to swim and my mother noticed that… She took me to see Kirt and Theresa [Myers], who had just started the Americus Blue Tide. We started swimming in the Barlow Street pool. That was my very first swimming pool… [The Myers’] took me under their wing and I swam with them until they moved to South America for a few years.”

Peak went on to say that his family eventually moved as well, but later returned to Americus.

“By the time I was 13, I was pretty fast, but I hadn’t been swimming with these guys,” he continued. “Kirt came to see me at a swim meet and I swam really well. Then, we made the move back to Americus. Essentially, we moved, in large part, to train with Kirt and see how good I could get. We had so many national-level swimmers, in addition to Angel [Myers-Martino, now McGuire].”

“There were four more girls that were also very fast,” he added. “So, I came back at 13 and I made the Zone Team. I got to go down to Louisiana and compete at LSU. I made Junior Nationals and Senior Nationals. I did not make it to the Olympic Trials, but a lot of others did.

“Without Kirt and without swimming, I really wouldn’t have had the opportunity to do the things that I’ve done,” Peak concluded.

On his accomplishments as a young swimmer, Peak stated, “I ended as Georgia State champion in two events during my high school career at Southland Academy. I achieved a lot of accolades there. I was MVP of the team several years because I was the fastest Southland swimmer at the time.”

DeMott joined the discussion to talk about the current incarnation of the ABT, as well as the organization’s future plans. “We’ve been as high as 80 [team members], he said. “We’re at probably around 60 right now… We always enjoy the Olympics because it increases our exposure. I think that people get to see what a neat sport it really is. Obviously, swimming itself is a very popular activity, but I don’t think that a lot of people consider competitive swimming automatically. Once they do, they find it really fun.”

“I think that every youngster in every sport dreams about making the big time, Demott continued. “We discuss that culture on the swim team. We talk about [Myers-Martino, now McGuire] and tell stories about the people who have reached those heights… The Olympics give us an opportunity to have that conversation with a broader audience.”

On his new position with the ABT, Peak told the ATR that, in the beginning, he will be working with younger swimmers, helping teach them proper techniques. Eventually, he will be working with each age group, splitting time between the ABT’s training locations in Albany and Americus. “Right now, I’m going to focus on the simplicity of the technique with the little ones,” he said.

“Eventually, I’ll actually be working with everyone, from six year-olds to senior team members,” he said. “I think that Tim [DeMott] and I share the same value system when it comes to coaching… I’ll basically follow his lead as I develop my own voice. In the beginning, I’ll follow his workouts and his programs and offer my own insight as I progress…”

“I think that we’re going to work really well together and have a lot of fun,” he finished.

Asked what local competitive swimming fans can look forward to, DeMott stated that the future looks bright for the program as he intends to continue the program’s tradition of excellence.

“We’ve had a number of kids swim at the U.S. Trials, besides Angel…,” he said. “We’ve had more than 20 swim at U.S. Nationals. We have state championships galore and individual championships. We’ve won our division in the age group championships a couple of times recently… We have some talented youngsters coming through the pipeline. We have one young man who is ranked eighth in the country in his age group this summer.”

From the Archives: Taking a journey through the Southland Raiders’ historic 1986 football season; part 3

By MICHAEL MURRAY ATR Sports Editor michael.murray@americustimesrecorder.com Editor’s Note: We, at the ATR, are very proud of our area’s rich... read more