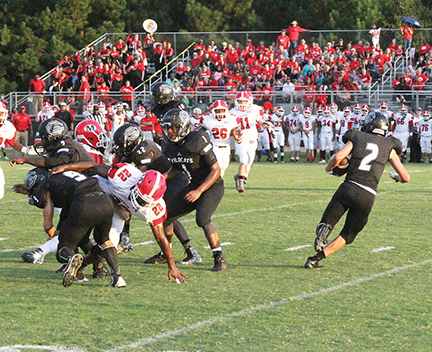 ELLAVILLE –  The Schley County Wildcats pulled the curtain on their 2016 football season with a home bout against longtime rivals, the Marion County Eagles on Aug. 19 in Ellaville.
Despite an admirable performance by the ‘Cats on their home turf, their experienced foes rolled past the home team, forcing a series of unfortunate turnovers throughout the match that plagued Schley’s squad throughout the contest.
The Eagles emerged with a 41-0 victory under their belts.
The Marion crew came blazing out of the gate, immediately proving to their hosts that they came to compete. After receiving the initial kickoff, the Eagles’ Mykelle Kelley brought down a pass and took off on a 40-yard jaunt before he was stopped at the Wildcats’ three yard-line. A touchdown run by the Eagles on the following play gave the visitors a very early 6-0 advantage.
After the Wildcats’ return drive was cut short by a hard-nosed defensive line, the Eagles regained possession and pushed forward on a drive that was eventually brought to a halt, highlighted by tough backfield tackles from Schley’s Wade Rogers, Clint Sellars, and Tra Sampson.
Two possessions later, the Eagles furthered their advantage, exploiting a short snap as the Wildcats prepared to punt. A Marion defender gained control of the ball and managed to break the plane, adding another six points to the Eagles’ pad.
After holding the ‘Cats’ return drive to five downs, despite an exciting run by Schley’s Reid Ragsdale, the Eagles forced their hosts to relinquish the ball and took off towards another scoring drive.
Though the visitors’ progress was slowed by hard stops from Schley’s Christian Arnett and Alec Harris, Marion’s Jalen Tullis managed to pull in a reception and make a break for the goal for a 45-yard touchdown run. A two-point conversion pass found its mark and left the Eagles up 21-0 at the conclusion of the initial quarter.
The second quarter was highlighted by intensely hard tackles from Wade Montgomery and Demarco Cross, coupled with an expert interception by Sampson and a long bomb reception by Ragsdale.
Marion’s Trice McCannon  kept the visitors’ section of the stands cheering with a 70 yard touchdown run, giving the Eagles a 28-0 edge by the end of the half.
A final 25-yard reception by Calvin Sims for the Wildcats proved too late, as the buzzer immediately sounded after he pulled it down.
The Wildcats’ luck did not improve after the break. Despite several exciting plays from Calvin Sims and Marquell Sims, as well as Tyrie Hawkins, Alec Harris, and Zykievous Walker. Coupled with the defensive efforts of Wade Montgomery, Dartavious Napper, Christian Arnett, and Wade Rodgers, the team put up an admirable fight, but couldn’t seem to catch a break as the Eagles pressed on for two more touchdowns in the second half, sentencing the ‘Cats to the 41-0 defeat.
The Wildcats will look to improve on their record on August 26, as they travel to Edison, Ga. to test their skills against a new set of foes, the Calhoun County Cougars. The Wildcats have not squared off on the gridiron against the Cougars since 2005.
Following a bye week on Sept. 2, the Wildcats will hit the road once more on Sept. 9 for Milledgeville to battle the Georgia Military College Bulldogs.

By MICHAEL MURRAY michael.murray@americustimesrecorder.com PERRY – Fresh off of a 28-8 thrashing of Southwest Georgia Academy in the team’s season... read more