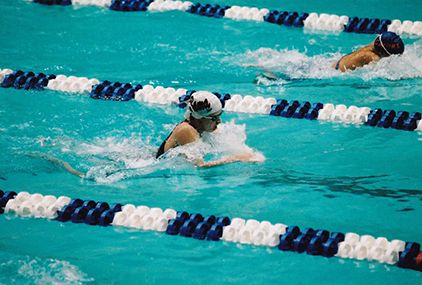 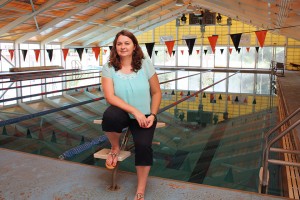 Catalina Casaru, Ph.D., assistant professor of health and human performance since 2012, competed for her home country of Romania in the 200-meter backstroke and the 4 x 100 medley relay in the 1996 Olympics Games in Atlanta.
Growing up, much of Casaru’s time was spent in the pool. It began with swimming lessons at the age of three and a half.
“Because my hometown of Braila is on the Danube River, it was important to my parents,” she said of learning to swim at an early age. Casaru enjoyed swimming, and the schools in Romania provided an opportunity for her to continue the activity.
“In Romania and Eastern Europe, there is a system where schools provide after-school athletic programs,” Casaru said. “After-school hours – beginning in kindergarten – we went to the swimming pool twice per week. The kindergarten was located on the same campus with the primary school, the middle school and the high school. Students had the opportunity to participate in sports such as track and field, swimming, handball, volleyball and others.”
At an early age, she started swimming competitively.
“I never thought about doing anything else,” she said. “I have enjoyed swimming ever since I started swim lessons. My sister tried track and field and gymnastics; however, I tend to stick to one sport at the time, and for me swimming felt right.”
“To be accepted in the sports curriculum high school,” she added, “you have to test in, and there is a tryout process to get into the swimming program. So, in high school, every day, besides the academic classes, there were two hours of swimming included in the curriculum. However, to be competitive at the national level, we had to train more than two hours every day.”
During high school, Casaru won over 200 National titles, 10 medals in two years at the European Junior Championships and 20 gold medals at the Junior and Senior Balkan Games. Her main events were the 100 and 200 backstroke, the 200 and 400 individual medley (consists of the butterfly, backstroke, breaststroke and freestyle) and the 4 x 100 medley relay (backstroke leg).
The Olympics were next.
“My coaches had sent someone to the Olympics in 1992 – two swimmers from my team,” said Casaru. “It was very beneficial to my swimming career to have had the opportunity to train alongside Olympians. They were an inspiration to train hard and to aspire to be an Olympian. In 1996, I went to the Olympic trials and qualified (200-meter backstroke and the 4 x 100 medley relay), and then I went to the Olympics. I was still in high school at that time.”
“The Olympics were a whirlwind,” she said. “I swam in front of 10,000 people. Prior to that, the most I ever swam in front of was maybe 500 to 1,000 people. We were physically prepared to compete at the highest level; however, I believe that as athletes we would have benefited more if a specialist (psychologist) would have prepared us to process the experiences we were about to encounter at the Olympics”.
Despite being a high school student at the time, Casaru performed well in Atlanta, finishing 14th out of 33 in the 200-meter backstroke with a time of 2:15:15. Though her 4 x 100 medley relay team did not medal either, they set a new Romanian record with a time of 4:16:18.
Since the ’96 Olympics, Casaru said that many rules for competitive swimming have changed (i.e. turns, starts, how far you can swim under water, suits, goggles, etc.). She noted, however, that “the sport has evolved in a good way.”
Despite being actively recruited by the best college swimming programs in the U.S. (i.e. University of California at Berkely, Pepperdine and Auburn) after the Olympics, she committed to compete in another Olympic cycle. After the 2000 Olympic trials where she did not qualify, Casaru signed a scholarship to swim for the University of Alabama in Tuscaloosa.
At Alabama, Casaru was a two-time All-American, and she set a school record in the 400-meter individual medley. Meanwhile, she earned a bachelor’s degree in business administration with a minor in Italian, and a master’s degree and doctoral in health and human performance.
Subsequently, she leads Georgia Southwestern’s very successful Exercise Science and Wellness Department that sends students to physical therapy graduate schools all over the southeast. She has also conducted and published research in the areas of sport and exercise science, and she has given multiple research-based presentations at national and international level conferences.
Though not swimming competitively any more, Casaru does spend much of her free time in the pool. After she has finished teaching for the day, you may find her swimming laps in GSW’s Deriso Pool.
“Looking back at the Olympics and the process that got me to the Olympics, I am grateful for my parents’ support and the many volunteer hours my coaches invested in me,” Casaru said. “I have learned to be resilient, dedicated to my goals and that success could only be achieved through hard work.
“The Olympics and swimming opened new opportunities for me, scholarships that provided a great education from the University of Alabama, and the opportunity to teach and mentor exercise science and wellness students at Georgia Southwestern State University,” she concluded.