‘I don’t know where I am,’ motorist under bridge tells 911 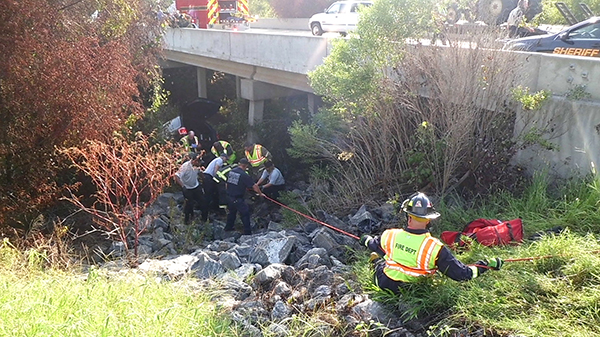 Personnel with Sumter County Fire & Rescue employed their rope rescue equipment and training to remove a young women from her vehicle after it ran off the road and underneath a bridge into a creek.

AMERICUS — A young woman traveling through Sumter County on Wednesday morning took her eyes off the road “for a second” ended up underneath a bridge in a creek.
A passing motorist, an unidentified male, witnessed the SUV go over the guardrails and called 911. The driver also called 911. A copy of the E911 transmission indicates the young woman was very distraught and said her ankle was injured and she couldn’t get out of the vehicle. Crying, she told the dispatcher she didn’t know where she was, but since she was underneath a bridge, she was concerned that first responders wouldn’t be able to find her. The dispatcher calmed the driver, assuring her that help was on the way.
Apparently the man who first call 911 was able to communicate with the driver because he 911 again and told the dispatcher that the front end of the vehicle was in the water but the driver seemed to be all right, and that he couldn’t get to the vehicle because of the rough terrain.
According to the Georgia State Patrol Post 10, Americus, which investigated the accident, Catlyn R. Landrum, 24, of Douglasville, driving a 2010 Ford Escape SUV, was traveling north on U.S. Highway 19 South at 8:35 a.m. Wednesday when she approached the bridge over Bear Branch Creek.
The report says the driver told the investigating trooper that she took her eyes off the road “for a second.” While negotiating the curve, the SUV traveled into the median between the guardrails, then “vaulted” from an embankment and struck several large rocks with its front. The vehicle came to an “uncontrolled” final rest partially in Bear Branch Creek, facing north. The report said the area of impact was on the southern edge of Bear Branch Creek. Landrum was taken by Gold Star EMS to Phoebe Sumter Medical Center for treatment. She is charged with failure to maintain lane.
Sumter County Fire and Rescue along with the Sumter County Sheriff’s Office were dispatched to the scene at 8:46 a.m. Sumter County Fire Chief John Ekaitis said the Middle Flint 911 Center advised all responding agencies that the vehicle was in the water and under the bridge. Upon arrival of emergency personnel, firefighters found a vehicle in the water, down an embankment with one patient inside the vehicle. Fire personnel started extrication and Gold Star EMS provided patient care. Sumter County Sheriff’s deputies conducted traffic control around the incident.
Ekaitis said that in order to extricate the patient from the accident scene, Sumter County Fire and Rescue had to utilize their rope rescue rigging system ,and the patient was safely extricated and taken to the hospital. He said that 14 firefighters responded along with three sheriff’s deputies and other emergency response personnel.