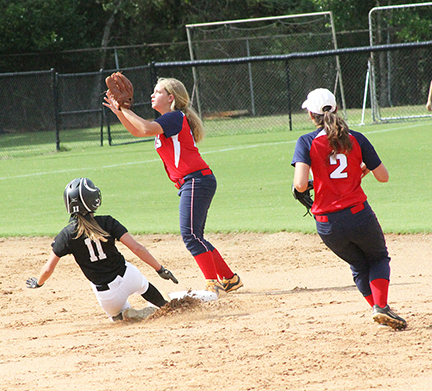 Michael Murray/Americus Times-Recorder: Southland’s Savanna Swann slides into second base, executing a steal following her first at-bat during the Lady Raiders’ contest against Deerfield-Windsor on August 18 in Americus.

The Southland Academy Lady Raiders’ softball team has gotten off to a strong start in their 2016 season. The team participated in a preseason warm-up tournament in Albany at the Deerfield-Windsor School (DWS) before going on to rack up a 3-1 record to date on the regular season.
The preseason tourney helped the Lady Raiders prepare for their season opener against Southwest Georgia Academy (SGA). The team took a 7-5 loss in that match.
The Southland ladies made up for lost ground in their ensuing trio of contests, earning a significant 10-1 victory over DWS on August 18 and another, 7-1, over Westwood four days later. Southland took their third win of the season on the road on Aug. 25, traveling to Thomasville to defeat Brookwood 18-8.
Lady Raider head coach, John Brady, recently spoke with the Times-Recorder to discuss the team’s season to date.
“We’re off to a respectable start…” he stated. “We had good pitching from Brittany Tyler and Savanna Swann throughout the whole tournament [at Deerfield-Windsor]. We played really good defense and got some timely hitting… It’s always good to go there and play. The girls have a good time and it’s a good chance for them to bond, to get to know each other a little better, and build trust. It was very productive… We have a lot of new faces so we’re trying to learn how everybody can fit in. It was good, as far as that goes. We played well for the most part.” 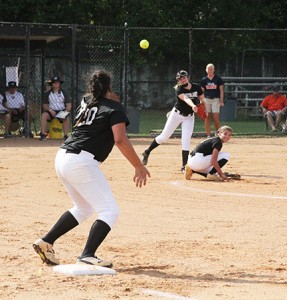