Raiders extend streak to 3-0 with 35-0 shutout of Westwood Wildcats. 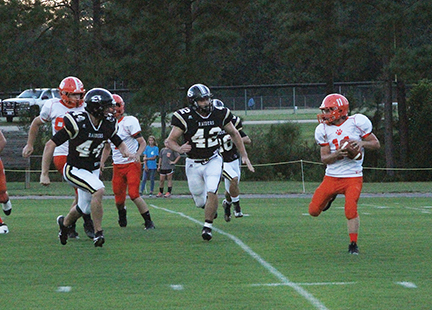 Michael Murray/Americus Times-Recorder: Southland’s Stephen Taggart (42) and Morgan Youngdale (44) close in on Westwood’s quarterback moments before executing a dual sack during the first quarter of the Raiders’ August 19 contest.

AMERICUS – The Southland Academy Raiders hit the gridiron in Americus for their third match-up of the season against the Westwood Wildcats on August 19 at Harvey Simpson Field in Americus.
After a heated battle against their long-time rivals, the Raiders walked away with their third win of the season under their belts, a 35-0 victory over the Wildcats.
It was touch and go for both of the competitors during the initial quarter as the Raiders forced Westwood to punt after their first set of downs. A bobbled punt return was quickly recovered by a Wildcat defender at the Raider 38, putting the visitors within striking distance.
Westwood pressed into Southland’s red zone, but with the efforts of Southland’s defenders, notably Logan Morris, Stephen Taggart, and Morgan Youngdale (who each contributed sacks to stall their opponents’ progress), the Raiders were able to repel the attack.
The teams swapped possession twice more before the Raiders found themselves on the offensive at their own 19. Hard runs by Townsend Ray and Clay Owen coupled with a keeper by quarterback, Alex Roach, left the Raiders at their opponents’ 22 by the end of the first half.
Five seconds into the second frame, Roach’s pass found Saige Batten in the end zone to break the scoring seal. The first of five successful PAT attempts by Zane Hines gave the home team a 7-0 edge early in the second quarter.
The Raiders weren’t done yet, however, as three minutes later, the team would cap off a two-play drive from their own 35, set up by a fourth-down sack by Youngdale and Hunter McCain, with a 25-yard Taggart rush into the end zone. Hines’ second PAT attempt of the evening split the uprights, leaving the Raiders up 14-0 with nearly nine minutes left before the break.
The Raiders struck again 38 seconds before half-time when Logan Morris pulled down a 37-yard reception and made a break for the end zone, completing an exciting seven-yard drive. The scoring play was set up by a pair of long rushes by Taggart and a reception by Morris. Hines nailed his third kick of the half to leave the Southland squad up 21-0 as the teams hit the locker room for the break.
The Raiders wasted no time upping the ante in the second half after receiving the kickoff at their own 35. On the following play, Southland’s Parker Weldon burst through Westwood’s line, taking off on a 65-yard jaunt for the team’s fourth touchdown of the match, leaving a trail of defenders and Raider blockers in his wake.
Eight minutes later, the Raiders capped off the scoring for the game with Batten pulling down a pass at midfield and Morris ending the two-play drive with a 48-yard rush into the end zone. Hines then blasted his fifth PAT of the game through the goalposts to leave the Raiders up 35-0 as the final quarter commenced.
Southland’s powerful defense carefully guarded their advantage in the fourth quarter to ensure the victory and extend Southland’s winning streak to three games.
The Raiders will be on the road for their next two match-ups, traveling to Newnan on Sept. 9 to battle the Heritage School Hawks before heading to Dawson to take on the Terrell Academy Eagles in a non-region match-up. The Raiders will return to Americus on Sept. 19 to face the Holy Spirit Preparatory School Cougars.