2 contestants with ties to Americus vying for Miss America crown 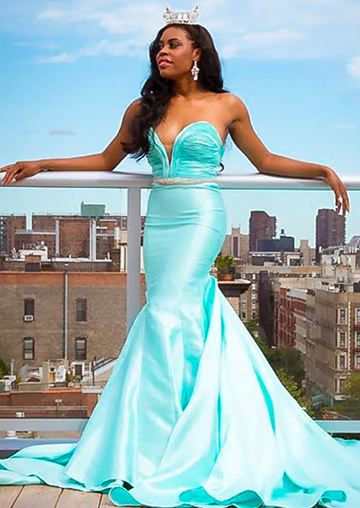 AMERICUS — Two of the contestants in the 2016 Miss America Pageant in Atlantic City, N.J., have strong family ties to Americus.
Their grandparents are Americus residents who will be in the audience to support their granddaughters for the final competition on the evening  of Sunday, Sept. 11 at 9:00 p.m..
Cierra Jackson, granddaughter of Lawrence and Bertha Hosley, will represent the nation’s capital as Miss District of Columbia in the upcoming Miss America Pageant, while Camille Sims, of Ithaca, N.Y., the reigning Miss New York, is the granddaughter of the Rev. Thomas E. Sims and the late Vivian Sims-Wright.
Sims and the Hosleys will be in Atlantic City for the preliminary competition Tuesday through Thursday; however, it might not be possible to have personal contact with their granddaughters. A long-standing policy of the organization requires that contestants remain sequestered during pageant week. 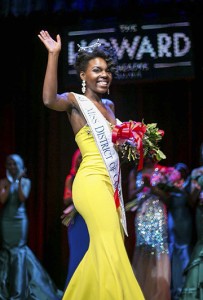 Camille Sims is the daughter of Tommy Sims, Americus High football standout and former NFL player, and Tracy Allen-Sims of Atlanta, and a great-niece of Calvin and Rosa Sims and the Rev. Larry and Virginia Sims.
A graduate of Cornell University with a major in human development and a minor in inequality studies, she works for the university in human development with an emphasis on youth social and personality development.
“We are excited about going to Atlantic City, and we’re extremely proud of Camille,” said her grandfather. “She’s set life goals and always has been a high achiever and obtained every goal. She’s visited us in Americus often through the years since she was a baby. Her grandmother Vivian, with whom she was very close, taught her how to sing when she was a very little girl. We had deep conversations over lunch and I recall when she was just seven years old she told me she was going to Harvard University.”
Sims continued, saying, “We hope she wins the title of Miss America;  however, she told me that if she didn’t she plans to enroll in graduate school to become a research scientist — another goal.”
During the Miss New York preliminary competition, Camille Sims won the interview award and talent award. Her platform for the Miss America Pageant competition is ensuring wellness and fostering food justice, and she will perform a vocal selection for the talent portion.
Meanwhile, Cierra Jackson, the daughter of Gregory Jackson, a 1983 graduate of Americus High School, and Dr. Cheryl Freeman-Jackson of Columbus, grew up in Columbus and graduated Columbus High School in 2010, and Spelman College in Atlanta with a degree in political science in 2014.
“We are so proud of Cierra,” said Hosley. ��She visits us often and we’re looking forward to supporting her at the Miss America Pageant. She’s been preparing for the pageant all summer.”
Jackson began competing in the Miss America Pageant system while a student at Spelman and was crowned Miss Brookhaven with the chance to compete in the Miss Georgia Pageant, placing among the top 12 contestants. She competed again as Miss Rome in 2013, and two years later, she was crowned Miss Columbus. Although she lost the state title, she received a non-finalist talent award. She also raised the third largest amount of donations for the Children’s Miracle Network.
Jackson moved to Washington as a fellow with the Running Start/Walmart Star Fellows Program that exposes young women to the world of politics, and was chosen for a White House internship, which she completed in May. She has authored a children’s book, “CC: The Military Kid.”
Her platform in the upcoming Miss America Pageant is on behalf of military children and to encourage others to be their true and authentic selves.