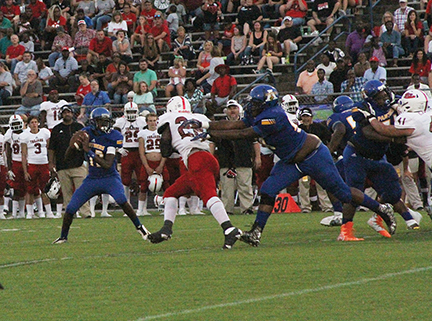 Michael Murray/Americus Times-Recorder: ASHS quarterback, Kierston Harvey, prepares to fire ogff a pass as his teammates block during the Panthers’ home opener against Lee County on Sept. 9 in Americus.

AMERICUS – The Americus-Sumter High (ASHS) Panthers hit the gridiron on Sept. 9 for their home opener, taking on neighboring AAAAAA powerhouse, the Lee County Trojans.
Despite the outcome of the game, a 36-10 ASHS loss, the Panthers put up a good fight in the contest, determined to show their much-larger team of guests that the ASHS squad is not one to be trifled with.
The morning prior to the match, ASHS students arrived at school to a trash-talking banner which had been left on campus (presumably by a group of Lee County pranksters) containing some less-than encouraging messages for Panther fans and team members, further egging on the rivalry. Ignoring the fact that the teams play in completely different classifications (Lee County’s team boasts a roster of around 125 players), the Panthers were visibly fired up from the ribbing, and it showed in their performance as the home team took the field.
The Panthers got off to a strong start in the contest, kicking off to the Trojans and proceeding to hold their guests to only six plays before picking up the ball near midfield.
The teams traded possession twice before the Panthers halted a Trojan drive at their own 43, when Ladarious McCrary broke up a pass attempt. Trabian West, Kobe Lewis, Jamorrian Johnson, and Eric Brown each contributed hard tackles to slow their opponents’ progress.
With the ball at their own 43 yard-line, the Panthers went on a 12-play, 40-yard drive highlighted by pass completions from ASHS quarterback, AJ Payne, to Sage Finch, Jacquez Barkley, J. Johnson, and Daveon Johnson, coupled with hard runs by Barkley and Payne. Despite the Panthers’ momentum, their progress was stopped by a hard-nosed Lee County defense. On fourth-and-eight from the Trojans’ 17, ASHS place kicker, Angel Chavez, nailed a 22-yard field goal to put the Panthers ahead 3-0, where they would stay until the end of the quarter.
Though Panther fans cheered on an exciting interception by Eric Brown and a set of receptions by Braelin Williams, ASHS would not see the opportunity to score again until well into the second frame.
In the meantime, Trojan running backs, Josh Asbury and Mark Robinson, managed to propel their team to a significant lead, adding two touchdowns, an extra point and a two-point conversion to give the visitors a 15-3 advantage for a good portion of the third quarter.
The Panthers struck again with just over a minute left before the half-time break, following an interception by Malik Jackson, who pulled the ball down at ASHS’ 30 and made his way to the Trojans’ 19 before being stopped. Payne completed a pass to D. Johnson at the four before running a keeper for an apparent touchdown. The play was called back due to a penalty, but Brown completed the journey two plays later, running the ball down the left side into the end zone. The Panthers’ PAT attempt was good, leaving the hosts behind 10-15 at the half.
Unfortunately, the Panthers would not get to see the inside of the end zone through the second half, as it seemed that, every time the home team threatened, a Lee defender would manage to snag an interception near the goal line.
That’s certainly not to say that the Panthers didn’t have some great plays during the second half.
In the third quarter, Brown made a run up the gut, leaving defenders in the dust and, seemingly, had a clear lane to the goal from ASHS’ 38. A last-ditch dive from a Trojan defender managed to trip him up, however, and Brown’s progress was stopped at Lee’s 45.
A few plays later, on the Trojans’ return drive, West picked up a botched snap to the roar of the home crowd and made it nearly 50 yards before being tackled.
Payne connected on several more passes, brought down by Brown, Williams, and D. Johnson while Lewis, Brown, and Williams continuously pushed the ball ahead on the ground.
Relying heavily on Robinson, the Trojans managed to exploit the series of second-half turnovers to add 21 points to their total and take the 36-10 victory.
The Panthers return to action on Sept. 16 in Americus, opening region play against the Westover Patriots. The ASHS crew will be on the road the following two weeks (Sept. 22 and 30), facing Northside High School, of Columbus, and Cairo High School, respectively. The Panthers return to Finklea-Robinson Field, in Americus, on Oct. 14 to host Shaw.

By MICHAEL MURRAY DAWSON – The Southland Academy Raiders hit the trail on Sept. 9, heading to Dawson to take... read more