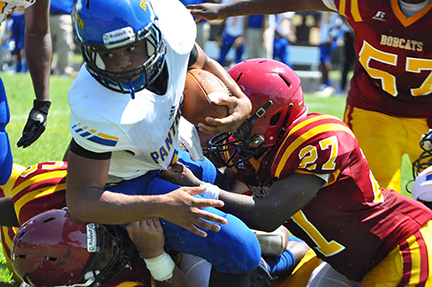 Photo courtesy of the Cordele Dispatch: ASHS running back, Kobe Lewis, attempts to break a tackle during the Panthers’ Sept. 3 tilt against the Dooly County Bobcats.

VIENNA – Following a rain delay, the Americus-Sumter High School (ASHS) Panthers took off for Vienna on Sept. 3 to take on the Dooly County Bobcats for their second contest of the 2016 season.
Following a hard-fought battle, the Panthers pulled ahead for good in overtime to snag a 20-14 victory in the non-region match. The win leaves the Panthers overall record at 1-1.
The Americus crew got off to a strong start in the initial quarter, with Kobe Lewis opening the scoring on a 29-yard run to give the Panthers a six-point lead. ASHS place kicker, Carlos Hernandez, then split the goalposts to advance the ASHS advantage to 7-0; a lead which the Panther defense would carefully guard through the remainder of the first half.
When the teams returned from intermission, the Bobcats made their mark; scoring on a 22-yard run to narrow the gap to 7-6 in the third frame.
The Panthers struck again in the final quarter, with quarterback, AJ Payne, running a one-yard keeper into the end zone. Hernandez’s kick was, once again, spot on, giving the visitors a 14-6 lead.
Refusing to give up, the Bobcats negated ASHS’ advantage later in the final stanza, scoring on a 10-yard pass and running in a two-point conversion to leave the score tied 14-14 as the clock wound down, signaling the end of regulation play.
In the overtime period, the Panthers put the game away as Payne honed in on Jamorrian Johnson, in the end zone, and fired off a pass. Johnson pulled the ball in to the cheers of the visiting fans, giving the Panthers a 20-14 lead and cinching the victory.
Kierston Harvey and Payne split quarterback duties for the Panthers, with Payne leading the way in terms of completions. Payne connected on eight passes in the match for a total of 147 yards. Harvey tacked on another 15 yards for the ASHS cause on his two connections.
Lewis led the way on the ground for the Panthers, rushing for 85 yards on 12 totes. Eric Brown followed close behind, carrying 11 times to contribute 56 yards. In total, the Panthers covered 324 yards in the contest.
ASHS will look to improve their record in their home opener against the Lee County Trojans on Sept. 9. The ASHS crew will open region play the following week, hosting the Westover Patriots  at Finklea-Robinson Field in Americus on Sept. 16.