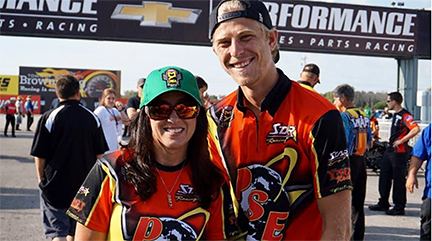 Submitted by STAR Racing: Sampey and Reed pause for a photo op at the Chevrolet Performance U.S. Nationals, where both racers qualified for the NHRA Carolina Nationals.

It’s the best-case scenario for the PSE/Star Racing Buell team of Angelle Sampey and Cory Reed. Both have raced their way to the Countdown to the Championship and, with the points reset coming into effect this weekend at the Ninth annual NHRA Carolina Nationals, the PSE/Star Racing duo has two chances of coming away with the Pro Stock Motorcycle World Championship at the end of the season.
Three-time NHRA Pro Stock Motorcycle World Champion, Angelle Sampey, and Rookie of the Year contender, Cory Reed, may have many years of experience riding a motorcycle separating them but they both approach the Countdown to the Championship in the same way.
“I accomplished one of my goals, which was getting into the Countdown,” Reed said. “Going to the semifinals in Indy helps me build confidence because I know we can do that every weekend if everyone does their job; if I can drive well and George gives it a good tune-up, we will be pretty hard to stop.”
“I think our team’s goal for the Countdown is to just keep doing what we’ve been doing all season,” Sampey said. “I try not to think about the points too much because if I do, I’ll end up putting too much pressure on myself and I don’t want to let myself down. I’d rather just focus on doing well every run and it’ll end up how it ends up. We’re in championship form with my bike and we’re getting there with Cory’s bike. Now that we’re both in the Countdown, I know we’ll keep going in the right direction and I don’t see us doing anything differently with our PSE/Star Racing Buells.”
Qualifying at the Ninth annual NHRA Carolina Nationals at zMAX Dragway began with two qualifying sessions on Sept. 16 at 3:15 and 5:30 p.m. (ET). Qualifying will continue on Sept. 17 with two more qualifying sessions at 12:45 and 3:00 p.m. (ET). Eliminations for the NHRA Carolina Nationals will be held on Sept. 18 at 12:00 p.m. starting with Top Fuel.
Sampey enters the Countdown in the number-three spot, followed by Reed, coming in at number 10.
In their qualifying rounds to the Countdown, Sampey and Reed both had successes at the 62nd annual Chevrolet Performance U.S. Nationals.
Sampey entered raceday in the number-one qualifying position and Reed raced to his first semifinals of his rookie season.
Reed entered his first semifinal round in what is widely considered to be the biggest race of the season.
Prior to entering the race, Reed said in a press release, “I think if we can make it to the semifinals at Indy, we’ll make the top ten,” Reed said. “I’m really proud that in my rookie season I’m even able to fight to be in the top ten.”
“Reed continues to prove himself on track as a rookie racer. Growing pains are to be expected and Reed is breaking through those with ease as he advanced to his first ever semifinal round in his first year in NHRA Pro Stock Motorcycle,” stated a recent press release from Star Racing, of Americus.