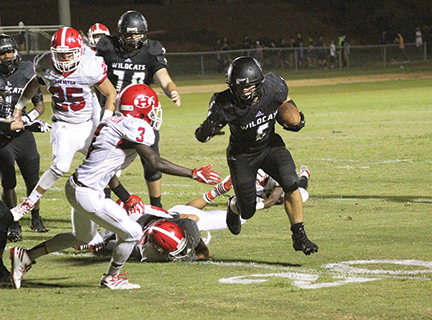 Michael Murray/Americus Times-Recorder: Schley’s Alec Harris prepares to break a tackle from a Hawkinsville defender during the second quarter of the Wildcats’ Sept. 16 contest against the Red Devils.

Wildcats drop to 2-2 after tough loss to Hawkinsville

ELLAVILLE – On the heels of a pair of wins over Calhoun County and Georgia Military College, the Schley County Wildcats took the gridiron on their home field on Sept. 16 to open region 1-A competition against the Hawkinsville Red Devils.
After a hard-fought battle, the Wildcats suffered a 16-8 loss in the contest, dropping their overall record to 2-2 on the season.
The Wildcats received the initial kickoff and got off to a strong start by pushing the ball to midfield, pressed forward with a reception by Alec Harris.
Much to the chagrin of the home fans, however, a fumble in the backfield was soon picked up by a Hawkinsville defender and run back to Schley’s 35.
From there, the visitors took off on a 10-play drive spanning 65 yards. Though the drive was slowed by hard stops from Schley defenders, Christian Arnett, Tyree Hawkins, Wade Rogers, and Wade Montgomery, as well as a crucial out-of-bounds push by Jake Hall, the Red Devils managed to burst into the end zone halfway through the first stanza. The visitor’ PAT attempt was spot on, giving Hawkinsvoille an early 7-0 lead.
Hawkinsville struck again when a bobbled snap bounced into the Wildcats’ end zone, resulting in a safety.
On their final posession of the first frame, the Red Devils completed a six-play, 50-yard drive with a touchdown rush to pull ahead 16-0, where they would stay until the end of the half.
Schley’s offense picked up in the second frame, covering nearly 60 yards in 12 plays to eventually fall short of their fifth first down of the drive by mere inches deep in their opponents’ red zone.
The drive was propelled by a series of rushes by Hawkins, coupled with receptions by Harris and Daniel Reese.
Halfway through the drive, the home fans erupted into applause when Reid Ragsdale pulled down an apparent touchdown pass. The play was called back, however, as the officials determined that the pass was caught out of bounds and the ball was brought back to the Wildcats’ 28.
The second half saw the Wildcats step up their game as the hosts took off on a 14-play, 69-yard drive, fueled by runs from Hawkins and Harris, as well as tosses from quarterback, Will Barry, that found Clint Sellars and Ragsdale.
Their progress was stopped short at their opponents’ six, however, forcing the ‘Cats to attempt a field goal. The attempt fell short, leaving the hosts down 16-0.
The Wildcats made their move in the final frame when Calvin Sims completed a three-yard trek into the end zone to cap off a 51-yard, nine-play drive highlighted by a long completion to Marquell Sims and a pair of long runs by C. Sims to put the Wildcats within striking distance.
Barry’s pass to Sellars was good for the two-point conversion, bringing the score to 16-8, where it would stay for the remainder of the match.
The ‘Cats threatened in the final minutes of the game after pushing the ball to their opponents’ 12 yard-line, after a set of rushes by C. Sims and Hawkins, coupled with receptions by M. Sims and Arnett, but were held off by a powerful Hawkinsville defense.
The Wildcats will be on the road next week, traveling to Vienna to take on the Dooly County Bobcats in another region test. Following that match-up, the ‘Cats will have a week to rest before heading to Butler on Oct. 7 to battle the Taylor County Vikings. Schley’s boys will return to their home field on Oct. 14, hosting new region opponents, the Macon County Bulldogs.

By MICHAEL MURRAY AMERICUS – The Raiders hit the gridiron on Sept. 16 to face the Holy Spirit Prep (HSP)... read more