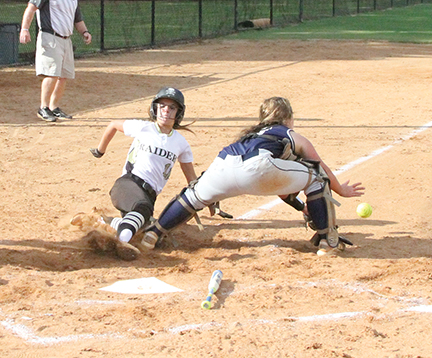 The Southland Academy Raiders have been enjoying an impressive winning streak in Georgia Independent School Association Region 3-AAA competition.
With seven region wins and one under their belts, the Lady Raiders have secured themselves a spot in the state playoffs, scheduled to begin in October. The Lady Raiders are currently 7-2 overall.
Lady Raider Head Coach, John Brady, recently told the Times-Recorder, “I don’t think we can finish any worse than second. The worst we can do is have two losses and I think the next team has three already. We want to win the region for the third year in a row, so that’s our goal right now.”
The path to the top for the Lady Raiders hasn’t always seemed so secure, however, as the team has had to scrap their way back into a few games from some serious deficits.
The Southland girls opened their most recent string of region victories with a match against the Valwood Lady Valiants, which was postponed earlier this season due to rain. When the teams returned to the diamond to complete the game more than two weeks after it was initially scheduled, the Lady Raiders pressed forward to snag a 12-7 win.
The Lady Raiders then went on to deal an 18-8 defeat to the Brookwood Lady Warriors before taking a hiatus from region play to take on non-region foes, the Westfield Lady Hornets. After a tough match-up, the Lady Raiders saw their winning streak spoiled with a 7-0 loss.
Returning to conference play, Southland’s girls dutifully brushed themselves off and traveled to Albany on Sept. 8 for a region tilt against the Deerfield-Windsor Lady Knights, dealing a 16-2 blow to their hosts due, in part, to an impressive seventh-inning rally that netted the team 11 runs.
The Southland crew rode this momentum into their rematch with Valwood on Sept. 13, defeating their hosts 8-6 before hosting Brookwood once more and grabbing a 4-1 win to cap off the streak.
Southland’s girls looked to put the region season away with a pair of contests against the Tiftarea Lady Panthers. The Lady Raiders won the first match 9-3 on Sept. 19 and returned to Americus on Sept. 22 to have their perfect region season ruined after a 6-5 defeat.With matching region records, the teams will go into a tiebreaker round to determine the region champions. The details of the upcoming test are yet to be determined.
“We’re still making a few mistakes here and there, but we’re continuing to get wins and that’s really all that matters, I guess,” said Brady, on the team’s string of region successes.
When the team’s first match-up against Valwood was cut short, the Lady Raiders were up 4-3 with the bases loaded.
Southland didn’t miss a beat when restarting the action. Olivia Perry stepped up to the plate when the game resumed and immediately drove in a pair of runs to advance Southland’s lead to 6-3. Not willing to give up without a fight, the Lady Valiants fought their way back into contention, tying the game 6-6 in the following frame.
The Lady Raiders went on to score six runs in the bottom of the fifth to pull ahead 12-6.
Sarah Beth Storey led off with a base hit and Holly McCain followed with a double. Savannah Swann then drew a walk and Brittany Tyler reached on a fielder’s choice. Abby Dent then walked and drove in a run before Perry got another hit and drove in a couple more runs.
Hannah Philpott capped off the rally with a hit and two RBIs.
“We just got it rolling there in the bottom of the fifth,” Brady said. “We ended up getting five hits in that inning.” 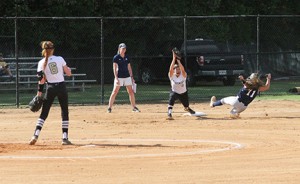 Michael Murray/Americus Times-Recorder:
Southland’s Holly McCain snags the ball at third base in time to dispatch a Brookwood runner attempting to advance during the Lady Raiders’ Sept. 14 tilt against Brookwood.