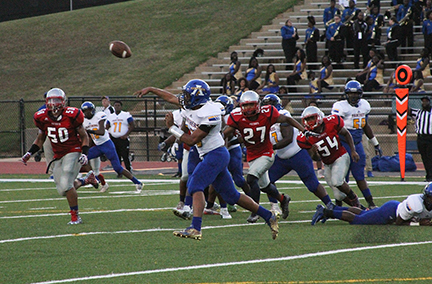 Michael Murray/Americus Times-Recorder: ASHS quarterback, AJ Payne, fires off a pass during the first quarter of the Panthers’ Sept. 22 contest against Northside High School in Columbus.

COLUMBUS – The Americus-Sumter High School (ASHS) Panthers stepped into unknown territory on Thursday, traveling to Columbus Georgia to take on newcomers to GHSA Region 1-AAAA, the Northside High School (NSH) Patriots.
After a hard-fought battle against a team that is sure to become a fierce rival for ASHS in years to come, the Panthers eventually succumbed to a 24-7 defeat, taking the team’s first region loss of the season. The Panthers’ region record now stands at 1-1 while the team’s overall record drops to 2-3.
Despite what the final score might lead the casual observer to conclude, the teams seemed evenly-matched throughout the majority of the contest. In fact, Northside’s offensive regular team didn’t manage to score a single goal in the match-up, with the home team relying on the special teams and the defense to rack up enough points for the win.
While field goals are commonly overlooked in high school football, the Patriots relied heavily on place kicker, Nathan Robinson, to score 15 of the team’s points, including a last-second 51-yarder to cap off the first half.
The team’s defense accounted for the remainder of the victor’s points. 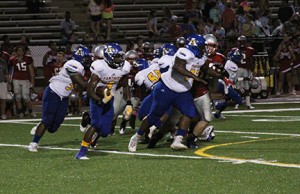 Michael Murray/Americus Times-Recorder:
ASHS’ Kobe Lewis (5) charges down the field during the second half of the Panthers’ Sept. 22 tilt against the Northside Patriots in Columbus.

The Patriots struck first after receiving the initial kickoff and driving into the Panthers’ red zone. ASHS’ defense stopped their progress in the red zone and Robinson booted a 31-yarder to put the home team on the board.
ASHS’ return drive spanned 11 plays and nearly 60 yards.
Highlighted by a series of completions from quarterback, Kierston Harvey, to Daveon Johnson, Braelin Williams, and Sage Finch, as well as a pair of rushes by Eric Brown, the Panthers pushed their way to their opponent’s 19 yard-line.
Much to the chagrin of the visiting fans, a potential touchdown pass from Harvey was picked off NSH defender, Caleb Johnson, who wove through a sea of blue and gold to score the Patriots’ only touchdown of the game. Robinson booted the extra point for the hosts, bringing the score to 10-0 by the end of the initial frame.
The Panthers’ return drive was stalled near midfield and the ASHS crew was forced to relinquish the ball near midfield.
The Patriots pressed forward and the Panthers arrested their development at the nine, at which point Robinson booted another field goal to expand the host’s advantage.
The Panthers broke their silence on the return, with a drive that began with a series of impressive runs by Brown. The other half of the Panthers’ dual quarterback threat, AJ Payne, connected on a pass to Williams, bringing the ball to ASHS’ 46 before Kobe Lewis stepped in to take on toting duties. Lewis carried the following six plays, racking up around 27 yards before Payne switched it up and threw to Johnson, waiting at the two. From there, Payne ran a pair of keepers up the gut and eventually broke the plane for a six-pointer.
ASHS’ Carlos Hernandez then showed off his own kicking chops, splitting the uprights on the PAT attempt to narrow the gap to 13-7.
Robinson added to the Patriots’ lead with two seconds left before intermission with his successful 51-yard field goal, leaving the score 16-7 as the teams retired to the locker room.
At half-time, the Panthers had amassed an impressive 210 total yards while Robinson’s sure foot had put the Patriots ahead despite them only covering 109 total yards. Lewis led the Panthers on the ground with 42 yards on six carries while Payne and Harvey had combined to complete eight passes for 124 yards. 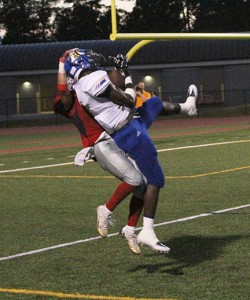 Michael Murray/Americus Times-Recorder:
ASHS’ Daveon Johnson brings down a pass at the Northside two yard-line to set up the Panthers’ touchdown play in the second half of ASHS’ Sept. 22 contest against the Northside Patriots.

The Panthers received the ball after returning from the break and pushed into enemy territory, stopping one yard short of a first down at NSH’ 32 after eight plays. Brown and Lewis rushed for the majority of the Panthers’ progress on this drive.
The Patriots responded with a 40-yard drive of their own and decided to go for the touchdown from ASHS’ 31. The bomb was intercepted by Brown at the two. On the ensuing play, however, the Patriots blitzed and managed to get the sack to add another two points to their lead.
The Panthers held the Pats to an apparent three and out on the return drive, thanks in part to a hard, crunching sack by Jamorrion Johnson and another brutal tackle by Trabian West, and managed to stop a fake punt attempt at midfield.
NSH responded in kind, forcing the Panthers to punt on the fourth play of their drive.
NSH was stalled near midfield and punted to the Panthers. The teams took turns recovering each other’s fumbles midway through the fourth frame before the Patriots picked off another pass and pressed into field goal range. Robinson booted his fourth field goal of the game with 6:30 left to play and added another for insurance three minutes later.
The Panthers made their final stand over eight plays as the clock wound down, but receptions by Williams, D. Johnson, and Finch landed the team just short of moving the sticks and the team was forced to sit back as the remainder of the game slipped away.
The Panthers racked up 124 yards on the ground in total, led by Lewis, with 86 yards on 13 carries. Brown added another 11 yards on 11 totes.
ASHS gained 192 yards through the air, with Harvey completing 11 of 19 attempts for 129 yards. Payne connected on five of ten tosses to add another 63 yards. D. Johnson led the team’s receivers, pulling in six tosses for 93 yards. Williams caught five balls for 51 yards, followed closely by Finch, who pulled down three passes for 40 total yards.
The Panthers will return to action on Sept. 30, heading to Cairo to take on familiar region rivals, the Syrupmakers. The ASHS crew will return to Finklea-Robinson Field in Americus on Oct. 14 to battle the Shaw Raiders.