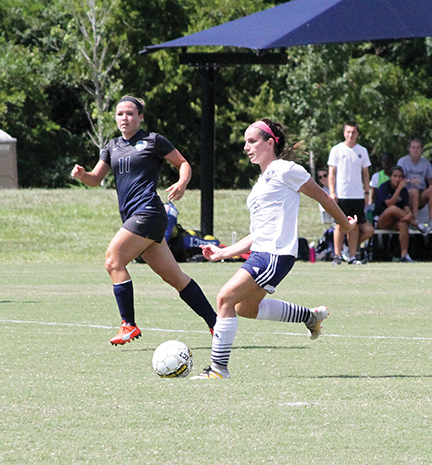 Michael Murray/Americus Times-Recorder: GSW’s Ella Hawking (right) drives towards the goal and sets up to take a shot on Sept. 24 in Americus. Hawkins scored the Lady ‘Canes’ only goal of the contest.

AMERICUS – The Georgia Southwestern State University (GSW) men’s soccer team had an answer for each of USC Aiken’s (USCA) first two goals on the afternoon of Sept. 24, but the Pacers final score in the 75th minute proved to be too much to overcome in a 3-2 loss at Hurricane Field in the Peach Belt Conference (PBC) opener for both schools.
Fresh off of a 4-0 shutout of Toccoa Falls College last weekend, GSW’s Lady Hurricanes opened PBC play that afternoon as well, with Ella Hawkins scoring her sixth goal of the season in a 3-1 loss to USC Aiken on Saturday afternoon.
The GSW men have lost four of their last five matches and drop to 1-5-1 overall this fall while USC Aiken improved its record to 2-5. The Lady ‘Canes moved to 3-4 overall and 0-2 in the PBC, while USC Aiken’s women’s team is now 3-6 and 1-2 in the conference.
For the second straight match, the Hurricanes fell behind in the opening minutes of the tilt. USCA scored just over seven minutes into the contest when Samuel Adams knocked in a header off a cross from Ryan Dwyer.
GSW evened the score less than two minutes later as Isaac Avila punched in a rebound off the post, but the match was not tied for long as Roberto Biendicho scored for USCA in the 13th minute. GSW opponents have combined to score five of their 15 goals this season in the opening 20 minutes of play. The Hurricanes trailed 2-1 at halftime. 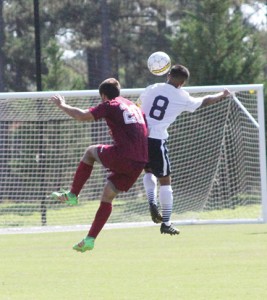 Michael Murray/Americus Times-Recorder:
GSW’s Isaac Avila (8) leaps up for a header in an attempt to push the ball into scoring position on Sept. 24 in Americus. Avila scored one goal for the ‘Canes in the contest.

In the 71st minute, Silvio Polly evened the score once again for GSW when he headed in a cross from Shane Madray.
It was another short-lived tie as USCA notched the game winner in the 75th minute when Kayque Stoffel scored off a breakaway.
Most stat categories ended up being close, as USCA finished with an 18-17 advantage in shots and a 15-11 edge in corner kicks. Fouls were even at 8-8.
Joshua Swift made five saves for GSW and Orlando Maldovan stopped four for USCA.
In the women’s match, the first half went scoreless but not without efforts. The Lady ‘Canes recorded four shots in the first half, three of which were on goal. The Pacers had 16 shots and only six were on goal.
The first three goals of the game came within three minutes of one another in the second half. USC Aiken stuck first at the 50-minute mark.
Hawkins settled the score in the 52nd minute as she dribbled right through the Pacers defense and shot the ball top left.
The Pacers quickly reciprocated and scored again in the 53rd minute after the ball hit the post.
The Lady ‘Canes kept digging deep but took a setback when a foul was called for a hand ball in the box off a corner kick and USC Aiken received a penalty shot which was good for a 3-1 lead.
The Pacers held off GSW in the end to take the two-goal victory.
GSW finished with 13 shots, seven of which were on goal while USC Aiken recorded 27 shots, 12 on goal.
Elyse Gowen had nine saves in the 79:32 minutes she played before she was substituted out due to injury. Chelsee Wright guarded the goal for the remainder of the game without facing any shots.
During the matches, the school hosted the ‘Canes Cornhole Championship and held other activities for students to participate in, including a dunking booth.
The Hurricanes and Lady ‘Canes return to action on Sept. 28 when they travel to St. Augustine, Fla. To face Flagler College in another round of conference match-ups. The Lady Hurricanes’ contest begins at 4:00 and the men’s team takes the pitch at 6:30. 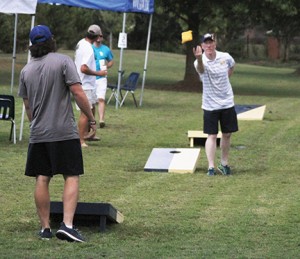 Michael Murray/Americus Times-Recorder:
GSW Interim President, Charles Patterson, joined in the fun on Sept. 24, participating in the ‘Canes Cornhole Tournament that was held during the soccer matches at Hurricane Field.