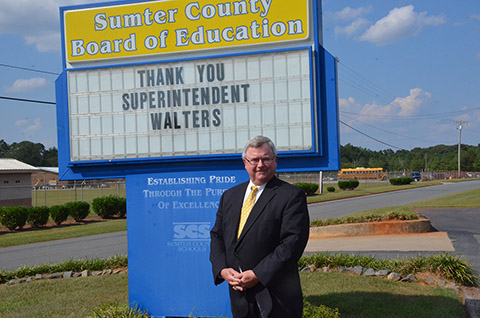 Interim school superintendent leaves with positive feelings about the system

AMERICUS —Interim Superintendent Lawrence Walters came into Sumter County Schools at a time of great uncertainty within the system. Over the schools’ winter break, former Superintendent Donnie Smith resigned his position of three years and any explanation for this unexpected change was not forthcoming. On Jan. 3, an entire school system came back to work not knowing what to expect.
What they found was a seasoned professional who seemed in control from the very start. Lawrence Walters, Ed.D., came to Sumter County after retiring as superintendent of nearby Lee County Schools after 12 years. Prior that he had logged more than 45 years as a school administrator, including seven years as superintendent of the school system in Decatur, Alabama. The sudden stillness of retirement took him by surprise.
“I was really ready to get back to work,” he said. The interim superintendent position was the perfect match for someone who wasn’t quite ready to call it quits.
Walters comes away with very positive feelings about the Sumter County School system and the people who work there.
“I have been very impressed with the hard-working, dedicated people in this school system,” Walters said. “I have been especially impressed by the commitment to raise the level of student achievement by the use of hard data. Through their ongoing analysis, they can tell you system-wide what exactly is being missed in the system’s math and reading curriculum so they can fix it.
“It is a well-funded school system in a very nice, unique and historic community,” he continued. “The potential is here for the system to really develop.”
During his nine months at the helm of Sumter County Schools, Walters put forth a surprising number of initiatives. He began a Sumter County Schools Job Fair which drew even more people than expected:
“Forty-two people came to present themselves and their resume and to talk to principals,” said Walters. “That was certainly a bright sign for the school system.”
He executed significant cost-cutting measures for the district, closing Cherokee Elementary School, while relocating students to the schools that were in close proximity to each other. The net effect was to reduce transportation costs by about $30,000 a month. He also reworked bus routes for the Ombudsman Program, adding even more transportation savings.
He initiated and oversaw the renovation of the high school gymnasium, adding a stage curtain, bleachers for 250 spectators, a new LED lighting system and a new scoreboard and sound system.
The technology needs of the system were realized under his watch, as the school board met on Thursday to approve a whole new round of purchases. For the first time, Sumter County Schools have a written agreement with Sumter County Sheriff’s Office for the use of its resource officers. Finally, he recommended that principals make the trip to Japan as part of the Japanese cultural exchange.
Walters is the ninth superintendent the school system has had in the last 26  years. This fact leads him to one of his two suggestions for the district:
“The system needs leadership stability,” he said “Some of what is needed are not quick fixes. They require established goals and sustained efforts to be realized.”
The other suggestion has to do with construction of the new high school that voters approved last year through a new local option sales tax.
“Land needs to be purchased so the process of construction can get underway,” he said.
As for what the future holds for this long-time administrator? An avid traveler, there is a trip to France and the Netherlands on the horizon. But his primary goals are somewhat more pedestrian.
“I’m going to go home and prune my hedges, clean out my closet, and do all the things people postpone doing until they have time,” he said.
The hardest part of leaving will be those who he leaves behind.
“I’ve really grown to like the people here,” said Walters. “But if you don’t enjoy people, education is the wrong business for you.”