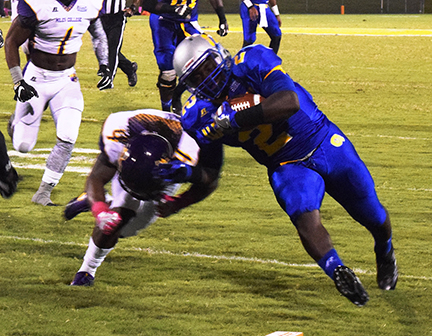 Submitted by Albany State University: ASU’s Jarvis Small fends off a Miles College defender as he makes a break for the end zone during the first half of the Golden Rams’ Oct. 1 contest against Miles College in Albany.

ALBANY – In a game filled with big-time plays, Albany State University (ASU) generated a huge lead and was able to hold off a late rally by Miles College to win 35-33 on Oct. 1 in Albany.
With the victory, ASU improves to 2-3 overall, while the Golden Bears fall to 3-2.
Miles College opened the scoring in the opening minutes of the first quarter. Nick Christianson made a 30-yard field goal at the 11:43 mark for an early 3-0 lead. With 7:24 left in the period, quarterback, David Whipple, found wide receiver, Jonathan Clark, for an 11-yard touchdown pass, and the Golden Bears held a 10-0 advantage.
Albany State would erase the deficit with two quick drives. ASU quarterback, Caleb Edmonds, connected with Quadrey Simmons for a 25-yard touchdown to create a 10-7 score after Emilio Maldonado’s successful PAT. The drive only used five plays and 78 yards, spanning 46 seconds.
The Golden Rams took the lead for good with only 20 seconds left in the stanza. Mack Green rushed four yards for his first career touchdown to give Albany State a 14-10 edge heading into the second quarter. Maldonado’s PAT capped a nine-play, 60-yard drive that used up 4:25 of clock time.
ASU used the second quarter to extend its lead. Dalviness Green scored on a five-yard scamper to give Albany State a 21-10 advantage with 12:40 left. The drive went four plays for 55 yards in 51 seconds.
A little over four minutes later, a Miles fumble turned into more points for the Golden Rams. Jarvis Small dashed 17 yards for the end zone, and ASU took a 28-10 lead, which lasted until half-time.
Green opened the second half with an exciting play for Albany State. He returned the opening kickoff 95 yards for a touchdown. The Golden Rams led 35-10 after the PAT.
However, with its other possessions in the second half, the Albany State offense started to sputter, and Miles’ opportunities began to increase. With 1:24 left in the third, Whipple scored on a one-yard run to cut the Golden Bears’ deficit to 35-17. At the 14:17 mark of the fourth, running back, Jamarcus Nance, rushed 25 yards for another touchdown, and ASU only held a 35-24 edge.
On the ensuing kickoff, the Golden Rams were called for a safety when Green was tackled in the end zone, and Miles was within nine at 35-26. The Golden Bears didn’t take advantage until the 2:10 mark when Nance scored another touchdown from 15 yards out to bring the score to 35-33.
After Albany State failed to keep the ball on its next possession, the Golden Bears had a chance to construct a game winning drive. Miles was in ASU territory with Whipple rushing, but he fumbled the ball in the final seconds, and it was recovered by Albany State. The Golden Rams were able to run the clock out and preserve the win.
Michael Green recorded four receptions for 82 yards. Small finished with 14 rushes for 60 yards.
Miles outgained the Golden Rams in yardage 382-276.
Defensively, Zavondric Shingleton led the way with 11 tackles (eight solo). Emmauel Brown added nine.
Albany State returns to action on Oct. 8 when the team travels to Charleston, S.C. to face Charleston Southern University. Game time is set for 11:45 a.m.