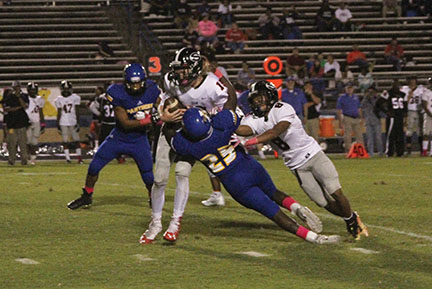 Michael Murray/Americus Times-Recorder: ASHS’ Jamorrian Johnson drags down Shaw quarterback, Andrew Tillery, for a sack during the second quarter of the Panthers’ Oct. 14 contest against the Raiders in Americus.

AMERICUS – After a month-long stint on the road, the Americus-Sumter High School Panthers returned to their home gridiron on Oct. 14 to take on the Shaw High School Raiders for the home team’s fourth Region 1-AAAA contest of the season. Both teams hit the field with a fierce determination, as the sting of last year’s loss at the hands of the Panthers still lingered in the memories of the visitors.
After a long, hard-fought, defensive battle, the Panthers eventually emerged victorious by a margin of 22-14, clinching the team’s second region win after four contests. With the victory, the Panthers’ overall record jumps to 3-4.
The Panthers got off to a blazing start in the contest after holding Shaw to only six plays following the initial kickoff. At the Panthers’ 27 yard-line, ASHS forced a fumble that the hosts promptly jumped on.
The Panthers then took off on a 10-play drive, propelled by eight hard runs from running back, Eric Brown, coupled with a pair from fellow back, Kobe Lewis. On second and goal from the six, Brown burst through the Raiders’ line of defense to break the plane and open the match’s scoring. The Panthers’ PAT attempt sailed low, bouncing off of the bottom of the goal post, and leaving ASHS up 6-0 with 4:36 left in the initial quarter.
The Raiders used the remainder of the first stanza to press deep into ASHS’ red zone, pressed forward by a series of runs by wideout, Nick Beason, and a scrambling completion by quarterback, Andrew Tillery. 45 seconds into the second quarter, Tillery connected on a pass into the end zone to equalize the score. Shaw then booted the PAT between the sticks to take a 7-6 advantage.
Not to be kept down for long, the Panthers answered with a 12-play drive highlighted by several expert runs by Lewis, a keeper by quarterback, AJ Payne. Payne connected on a pair of long passes to Braelin Williams, and Brown before finding Daveon Johnson in the end zone at the 5:53 mark, putting the Panthers back into the lead. ASHS’ two-point conversion attempt fell inches short, stalling the Panthers’ advantage at 12-7. 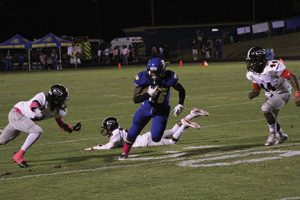 Michael Murray/Americus Times-Recorder:
ASHS’ Braelin Williams jukes past a Shaw defender after pullling in an AJ Payne pass during the second quarter of the Panthers’ Oct. 14 contest against the Raiders in Americus.

The Panthers kept it up on Shaw’s return drive, holding the visitors to three and out in a series of plays that included a brutal, crunching sack by Jamorrian Johnson, preceded by another carried out in tandem by Zyrieck Allen and Sh’Qual White.
The Raiders returned the favor as the clock ticked down, stubbornly refusing to give up ground, though Payne managed to find Williams to keep the drive alive. Stephon Luster added yardage to the drive as well, following a handoff.
Brown came close to breaking away at the visitors’ 36, but was tripped up in a last-ditch effort and, eventually, the Panthers found themselves staring at fourth and eight at their opponents’ 21.
From there, Panther place kicker, Angel Chavez split the uprights for a 38-yard field goal, leaving the Panthers up 15-7, where they would stay until the end of the half.
Shaw attempted to stage their comeback over the final 35 seconds of the half, but another sack by Allen put a stop to their progress in the final moments of the frame.
When the teams returned to the field following intermission, ASHS received the kickoff and plowed down the field in a frenzy, taking off on a drive that spanned 14 plays and 80 yards while eating up five and a half minutes of clock time. Sparked by a completion to D. Johnson, the ASHS crew made steady progress with a series of keepers by Payne, as well as a handoff to Brown.
Set back by several of flags, the Panthers soon found themselves in a third and 21 situation, which they quickly rectified with another long pass to D. Johnson. Lewis promptly added another ten yards up the gut before Payne tacked on another 21 on the following two plays. From the four yard-line, Payne zeroed in on D. Johnson in the end zone to expand the hosts’ lead. Carlos Hernandez deftly kicked the extra point to leave ASHS up 22-7 with 6:39 left in the third quarter.
Shaw hung onto the ball for the following four and a half minutes, but their efforts at progress were thwarted by a succession of hard sacks by Ladarius McCrary, Malcolm Mercer, and Michael Bridges. Lewis and James Baker added tackles as well to halt the Raiders’ momentum.
On fourth and 28, the visitors were forced to punt to the ASHS 28 yard-line, but the Raiders’ determined defense returned the favor, holding the home team to only one set of downs.
In the beginning of the final quarter, the Panthers punted to the Raiders, who embarked on a 14-play trek that pressed deep into the ASHS red zone.
A set of determined rushes by Beasome soon brought the Raiders to the Panthers’ five, with four downs to go.
ASHS staged an impressive goal-line stand at this point, with McCrary and Mikal Douglas pushing the line of scrimmage back and helping the Panthers gain a turnover on downs.
Now extra fired-up, the Shaw defense forced the Panthers’ second punt of the contest after three downs and began their final scoring drive.
Despite a series of hard stops by J. Johnson and Brown, as well as a pair of sacks carried out by Allen (solo) and a joint hit by J. Johnson and M. Douglas, Tillery managed to slip into the end zone from the four-yard line. Shaw nailed the PAT, narrowing the gap to 22-14.
The Raiders had one more trick up their sleeve, however, as the team recovered an onside kick with just over a minute left to play. The Panthers made short work of their comeback effort, with Lewis breaking up a potential touchdown bomb and Allen batting down another long pass. One final sack, shared by White and Bridges proved to be the final nail in the coffin for the Raiders as the clock struck zero.
Lewis set the pace for the Panthers on the ground, contributing 73 yards on seven carries in the contest. Brown followed close behind, adding another 61 in 15 totes. Payne contributed 57 rushing yards to the victory.
Brown’s sole reception of the match added 35 yards for the Panthers, while Williams brought down two tosses for 22 yards in the air. D. Johnson contributed 21 yards on his four catches.
The Panthers will return to Finklea-Robinson Field in Americus on Oct. 21 for the team’s Homecoming contest against the Carver High School Tigers, of Columbus. ASHS will then close out the regular season with one final Americus match-up against the Columbus High Blue Devils on Nov. 4.