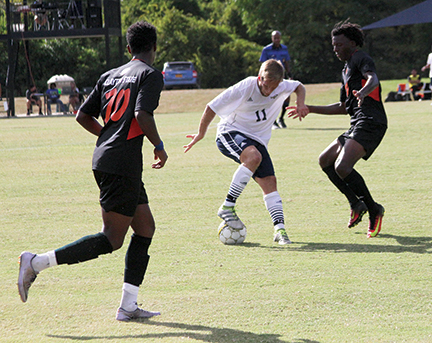 Michael Murray/Americus Times-Recorder: GSW’s Silvio Polly displays some fancy footwork as a pair of Clayton State oppopnents close in during the first half of the Hurricanes’ Oct. 12 contest in Americus. Polly scored a pair of goals late in the game to cinch the victory for GSW.

AMERICUS – The Georgia Southwestern State University (GSW) men’s soccer tandem of Silvio Polly and Isaac Avila struck twice in the final 11 minutes of their Oct. 12 come-from-behind, 3-2, overtime victory against Clayton State University (CSU) at Hurricane Field. Polly punched in both goals with Avila providing the assists.
Prior to this match-up, Bri Reda scored the GSW Lady Hurricanes’ only goal in their 2-1 loss to CSU Wednesday afternoon.
With the win, the men’s team snaps a five-match losing streak and improves to 2-8-1 overall this fall, 1-4 in the Peach Belt Conference (PBC), while Clayton State slipped to 2-10, 0-5 in conference play. It was only the second win for GSW over the Lakers in 11 meetings.
Following their defeat, the Lady ‘Canes dropped to 3-9 overall and 0-7 in the PBC, while Clayton State is now 7-3-1 and 4-2-1 PBC.
In men’s action, Clayton State put GSW in a hole early as Kevin Otokore scored in the 11th minute off an assist from Will Summerfield. The Lakers took their 1-0 lead into the half-time break.
Otokore turned around and provided the assist on the second Laker goal as he pushed the ball through GSW’s defense to find Wayne Hyman standing at the far post for a quick tap in at the 58:20 mark.
GSW cut the lead in half in the 79th minute when Chase Cantrell spun behind the Clayton State defense and beat the keeper down the middle inside the 18 off a ball placed by Brennan Bauschka for his first collegiate goal.
Polly provided the equalizer in the 86th minute.
The Hurricanes carried their momentum into the extra session and, in the 97th minute, Avila delivered a cross from the right side that found Polly in front of the six-yard box and set up the victory. Avila has provided an assist on four of Polly’s eight goals this season. Polly, GSW’s all-time leading scorer, sits atop the Peach Belt with 20 points this fall.
GSW finished with a lead in most stat categories, including a 27-18 advantage in shots and a 7-6 edge in corner kicks.
Joshua Swift made seven saves for the Hurricanes and Leuri Fraire stopped 10 for Clayton State. 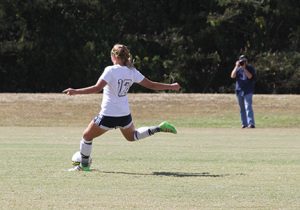 Michael Murray/Americus Times-Recorder:
GSW junior, Bri Reda, winds up to boot a penalty kick into the back of the net during the second half of the Lady Hurricanes’ tilt against Clayton State on Oct. 12. Reda scored GSW’s only goal of the contest.

In the women’s match-up, CSU scored their first goal in the 24th minute from inside the box and scored again 12 minutes later off a cross to the top right corner to lead 2-0 at halftime.
Reda’s goal came four minutes into the second half when she scored off a penalty kick after Clayton State took a foul for a hand ball.
The remaining 41 minutes went scoreless but not without effort. Clayton State recorded 14 shots in the second half compared to the six they had in the first.
The Lady ‘Canes played a tough physical game, recording 13 fouls between the two halves and were able to put pressure on the Lakers but fell short in the offensive side and lost 2-1.
GSW finished with five shots, three of which were on goal while Clayton State recorded 20 shots, 10 on goal.
GSW goalkeeper, Elyse Gowen. played all 90 minutes between the pipes, facing 10 shots and making eight saves.
GSW’s women will hit the road on Oct. 15 for Milledgeville to take on Georgia College and State University, beginning at 3:00 p.m.
Both the Hurricanes and Lady Hurricanes will return to their home pitch on Oct. 19, hosting the University of North Georgia. The Lady ‘Canes begin at 1:00 p.m., followed by the Hurricanes at 3:30.

By MICHAEL MURRAY AMERICUS – After a month-long stint on the road, the Americus-Sumter High School Panthers returned to their... read more