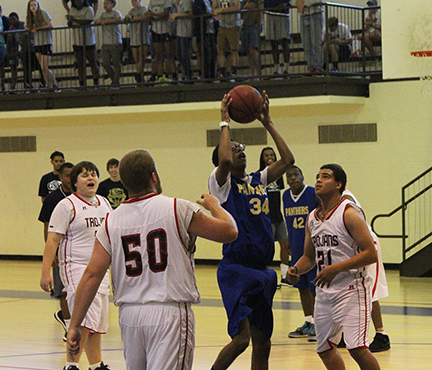 Michael Murray/Americus Times-Recorder: A member of the Sumter County team drives the lane and takes a shot during the basketball portion of the Special Olympic Games on Oct. 14 at GSW in Americus.

AMERICUS – “Let me win. But if I cannot win, let me be brave in the attempt” is the motto of the Special Olympics. On Oct. 14, nearly 250 athletes headed to the Georgia Southwestern State University (GSW) to embody this spirit in the Special Olympics Fall Games, participating in a series of basketball skills-related events.
The younger athletes were challenged in activities such as shooting, dribbling, and passing while some of the event’s older players engaged in a game of basketball.
Coach Carl Willis, who has been involved in the Special Olympics for many years through his role as a coach in the Sumter County School System, spoke with the Times-Recorder following the basketball match-up between the athletes from Lee County and Sumter County.
“We had about 100 kids from Sumter County participate… We also have kids from Lee County, Schley County, and Crisp County,” Willis said. 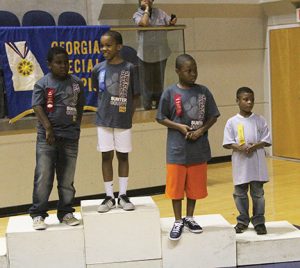 Michael Murray/Americus Times-Recorder:
Competitors from Sumter County take the dais to receive their awards on Oct. 14 at the GSW Storm Dome in Americus after competing in basketball-related challenges at the Special Olympic Games.

Kentrell Mercer, a special education paraprofessional at Americus-Sumter South Campus, who assisted with the basketball competition, said, “I’m proud of the kids. They gave 100 percent effort and that’s all that we can ask of them.” By half-time of the basketball competition, the students from Americus-Sumter had amassed a significant lead over the Lee County crew. “They exceeded my expectations,” Mercer continued. “That’s always a good thing.”
“Probably the main thing that we’re excited about was that both teams played well,” Willis added. “[Lee County] has one kid that is fixing to be leaving. Last year, he came to me and told me that he wanted to play on our team because he really liked us. He said he wanted to come play for us.”
“It was a really good game today,” Willis continued. “The kids played well and played with respect. They respected the game and they respected their opponents. We’ve kind of gotten to be friends with the Lee County staff. We have gotten to know a lot of them. It’s been fun. They came back [in the second half of the match-up] to make it nice and close at the end (The ASHS team managed to win 29-28) so nobody left sad or unhappy… That was the whole thing. It’s not about winning. It’s about doing our best. I think the fans had a good time, too. They were enjoying a close game. I’m very proud of each one of these young men and young ladies.”
Willis stated that there were a wide variety of athletes participating, ranging in age from second-graders to 12th-graders.
He added that the system had graduated several talented students last year and that it was nice to see this year’s group compete so well after the older players moved on.
Gavin Bernstein, one of the main organizers of the event from GSW, spoke to the Times-Recorder as well. Asked about the organization of the event, Bernstein said, “Really, it starts at the local level with the actual classroom teachers making sure that their kids have physicals and the training. They work with the county systems to get the training for the skill sets that they need for the basketball. Then, it trickles all the way up to the county leaders, making sure that they have signed and submitted the forms correctly. Here at GSW, we have a class that… part of the class is where we work on planning this Special Olympics event. We have huge participation from the GSW student athletes. Every team participates. Some run concession stands. Some run the games and the skills events. Some help the volunteers and help manage the Olympic Town.”
“That’s a huge part. And then, several campus-wide organizations; fraternities and sororities come and help volunteer and set up,” Bernstein continued. “They work with the kids and play with the kids throughout the day. It’s really a whole-campus activity.”
Every single student athlete volunteered at the event. Bernstein approximated that number to be between 250-300 with an additional 100 campus-wide volunteers.
“We’re always looking to get the community more involved so we’d love the community to take part in another event in the spring,” he concluded. “If anyone would like to get involved, they can always just email me and that would be great.”
Individuals that would like to donate time or financial resources to the Spring Special Olympic Games are encouraged to contact either Bernstein of the Sumter County School System. The spring Special Olympics involve skills involved with soccer as well as track and field.