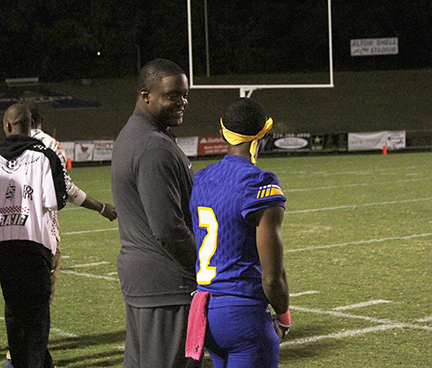 Panthers look to ride momentum of wins over Hardaway, Shaw into match-up with Carver

AMERICUS – After pulling in an exciting victory over the Hardaway Hawks on Oct. 21, the Americus-Sumter High School (ASHS) Panthers will hit the road on Oct. 27 for a Thursday tilt against Carver High School in Columbus.
Both teams will enter the contest with identical records, as the Panthers jumped to 4-4 overall (3-2 in Region 1-AAAA) after their Homecoming win over Hardaway while the Carver Tigers saw the same boost to their record (4-4 overall, 3-2 region) with their Oct. 21 42-24 defeat of the Columbus High Blue Devils.
Currently the Panthers are tied with Northside High and Carver for the second-place spot in the region.
According to recent reports, the Tigers’ team is comprised of a feisty group of athletes who are steadily improving as the season progresses. The Cairo Syrupmakers currently hold the 1-AAAA top spot with an undefeated region record after five contests.
If the Panthers are looking to gain an edge over the Tigers, they’d do well to watch out for Carver linebacker, AJ LaGrand, who helped turn the tide of the team’s last game with a 66-yard interception return (aided by Cameron Ashe, who picked up the ball after LaGrand lost control of the ball following a hit at the five yard-line). LaGarand is currently leading the region in tackles, with 91 recorded.
To combat this threat, the Panthers will likely utilize the skills of senior quarterback, AJ Payne, who is currently ranked second in the region in passing yards with 728. Of course, Payne wouldn’t be able to pull off this impressive feat without the sure hands of ASHS receivers, Daveon Johnson and Braelin Williams, who occupy the top two spots in the region’s receiving category with 410 and 335 yards through the air, respectively.
On the offensive side of the ball, the Tigers will be traveling with the triple threat of Cameron Jessie, Xiayihir Jacobs, and Romello Kimbrough, who have reportedly combined to rack up over 2900 yards so far this season for Carver.
It will be a tough job for the Panthers’ defense to hold these players back but, if the Americus team continues to gain momentum the way that they have over the past two weeks, they should be able to stop them.
Whichever way the game goes, it’s sure to be an exciting contest for fans on both sides of the field.