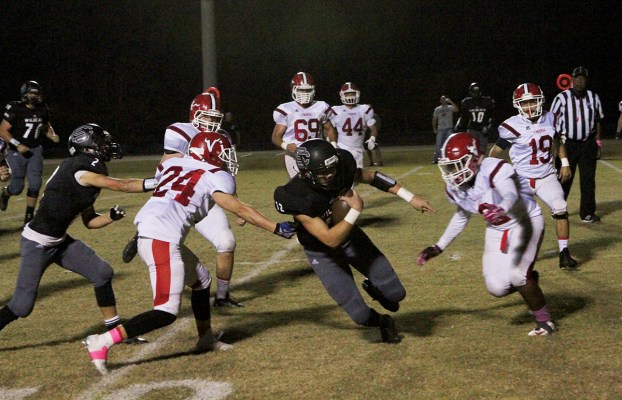 Michael Murray/Americus Times-Recorder: Schley quarterback, Will Barry, weaves his way through Pacelli defenders during the second half of the Wildcats’ Oct. 28 contest against the Vikings.

ELLAVILLE – On the heels of a heartbreaking loss to the Crawford County Eagles on Oct. 21, the Schley County Wildcats came back with a vengeance when the team entered sub-region competition on Oct. 28 in Ellaville. For their second-to-last game of the season, the Schley crew hosted the St. Anne-Pacelli Vikings, dealing a 30-0 blow to the visitors and bringing a five-game skid to a screeching halt.
With the shutout victory, the Wildcats improve to 3-6 on the 2016 season while the Vikings drop to 1-8.
The game got off to a somewhat slow start, with both teams’ defenses stubbornly battling to control their ground.
Pacelli received the initial kickoff and took off on a 15-play drive that spanned nearly 60 yards.
With the help of defensive linemen, Demarco Cross, Christian Arnett, Zykievious Walker, Wade Montgomery, and Clint Sellars, who each contributed tackles to stall the Vikings’ progress, the Wildcats were able to force the visitors to attempt a 42-yard field goal. The kick fell short and the visitors relinquished the ball at Schley’s 25.
The Wildcats embarked on a six-play drive, slowed by a series of penalties, but highlighted by an exciting run by Calvin Sims and an up-the-gut keeper by quarterback, Will Barry.
On the third play of the drive, Reid Ragsdale jumped on a forced fumble to retain Schley’s possession.
The ‘Cats were forced to punt early in the second frame, but returned the favor by holding the visitors to three and out.
Sims returned the visitors’ punt, landing the ball deep in Pacelli’s red zone. From the 16 yard-line, Barry barreled through the middle to push the ball to the four. From there, Sims grabbed the ball as his teammates made a hole in the Vikings’ defensive line for a touchdown rush. 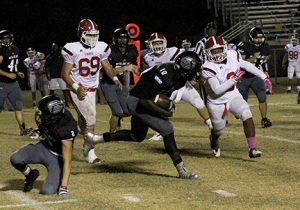 Michael Murray/Americus Times-Recorder:
Schley tight end, Zykievious Walker, braces for impact as a Pacelli linebacker approaches during the second half of the Wildcats’ Oct. 28 tilt against the St. Anne-Pacelli Vikings.

Ragsdale then deftly booted the PAT to leave the hosts up 7-0 with nine minutes left in the half.
The ‘Cats then kicked off to the Vikings and, once again, put a stop to the visitors’ offensive efforts with a vengeance. After five plays, the Wildcats received Pacelli’s punt at their own 19. Walker and Sims added yardage to the five-play drive before Tra Sampson broke past Pacelli’s defenders and took off for an apparent 61-yard touchdown that was, to the jeers of the home crowd, called back due to a penalty.
Retaking the ball at their opponents’ 35, Barry connected with receiver, Dartavious Napper, who earned a first down before taking off on a keeper to push the ball within striking distance. From the 22 yard-line, Ragsdale ran an 18-yard jet sweep to land at the five before Sampson plowed through the defense on the following play for the touchdown.
Ragsdale, again, nailed the extra point to put the hosts up 14-0, where they would stay until the intermission.
The Wildcats continued the onslaught after the break when, on their first drive of the second half, Barry scrambled to complete a pass to Arnett and, on the next play, Alec Harris managed to dodge several tackle attempts and jump over one defender for a 38-yard gain. After another rush by Barry and a completion to Sims, Ragsdale undertook a 31-yard field goal, splitting the uprights and widening the gap to 17-0 with 8:49 left in the third frame.
The ‘Cats then recovered an onside kick and attempted another long field goal (48 yards) five plays later, but the ball fell just short of the goal.
Schley’s defense continued to overpower their adversaries and, four plays later, had the ball returned to them at their own 43.
On the return drive, Sims broke a pair of tackle attempts on a long rush before Arnett pulled in another pass and proceeded to bob and weave through a forest of red and white uniforms to break the plane and score the Wildcats’ third touchdown of the game. Another successful PAT from Ragsdale left the Wildcats ahead 24-0 with five minutes remaining in the third frame.
The hosts scored their final points of the game in the fourth quarter after Walker forced a fumble near Schley’s 20 yard-line and immediately jumped on the ball. The Schley crew covered nearly 80 yards on the following two plays, set up by a Tyree Hawkins rush down the left that pushed the ball to Pacelli’s 36. From there, Sellars completed the trek, rushing the remainder of the distance and breaking the plane.
Ragsdale’s kick barely missed its mark, leaving the Wildcats with a 30-0 advantage that the team would carefully guard until the final buzzer.
The Wildcats will complete regular-season competition on Nov. 4, traveling to Talbotton to take on the Central Hawks.