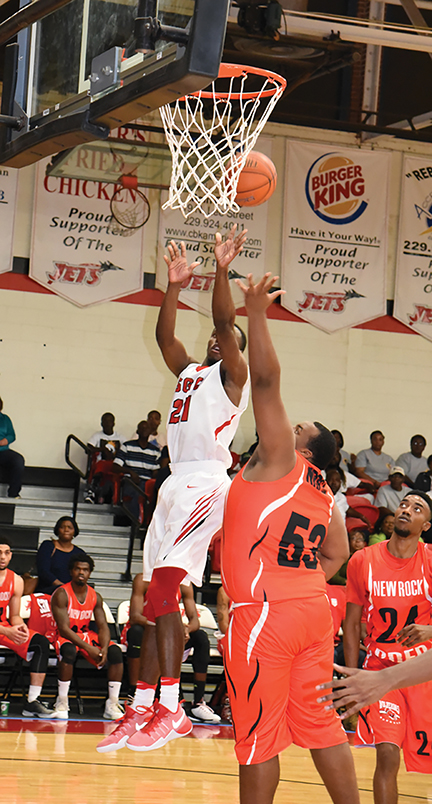 Submitted by South Georgia Technical College: Jordan Bates (21) was the only Jet in double-figures with 13 points in the SGTC season opener against New Rock Prep on Nov. 1.

AMERICUS – The South Georgia Technical College (SGTC) Jets and Lady Jets opened the 2016-17 basketball season at home with impressive wins. The Lady jets came from behind to defeat the Chattahoochee Valley Lady Pirates 68-63 and then the Jets followed up with an 83-75 victory over the New Rock Prep Wolverines.
“We missed a ton of shots,” said SGTC Athletic Director and Lady Jets head coach, James Frey. “We also turned the ball over way too many times, but we played hard and we came back and won. I am proud that we did not give up and that we found a way to win.”
There were 10 different lead changes in the Lady Jets’ 40-minute contest. The Lady Jets were up 37-32 at the break, but Chattahoochee Valley came out strong in the second half. The lead continued to swap back and forth until the Lady Jets were down 62-60 with one minute remaining to play. Strong shooting by freshman guard, Kanna Suzuki, from Japan and sophomore, La’Deja James, from Virginia Beach, VA along with freshman forwards, Esther Adenike from Nigeria, and Houlfat Mahouchiza from France allowed the Lady Jets to pull ahead in the final 15 seconds and take the victory. 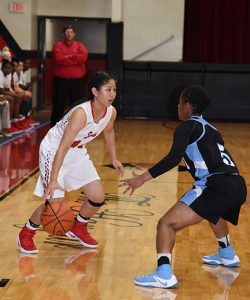 Submitted by South Georgia Technical College:
Kanna Suzuki (14) is shown above handling the ball for the Lady Jets. She was the top scorer in the season opener with 16 points in the team’s Nov. 1 season opener.

Suzuki was the leading scorer with 16 points. She was four of eight from the field with three three-pointers and hit five of six from the free throw line. Camille Coleman, a sophomore from South Bend, Indiana; and Adenike were close behind with 13 points each. Returning sophomore guard, James, closed out the double-digit scoring with 12 points. James hit five of six free throws in the final minutes to help secure the victory for the Lady Jets.
“Camille Coleman did an excellent job on defense. She completely shut down one of their top offensive players in the second half and that may have made the difference in the game,” said Frey.
After the exciting comeback finish for the Lady Jets, the Jets took the court and put the icing on the cake with their 83-75 victory. The Jets were up 43-38 at the end of the first half and continued to outscore their opponents to capture their first regular season win.
The Jets played their entire bench and got tremendous hustle on the court.
Jordan Bates, a 6’ 6” freshman from Orlando, FL, was the only player to score in double figures with 13 points. Bates was five of 10 from the floor, had one three-pointer and was two of two from the free throw line.
Jalen Thomas, a freshman guard from Columbus, GA; Pat Welch, a returning sophomore guard from New Hampshire, and Andre Kennedy, a sophomore from Albany, GA; all contributed eight points.
Marquel Wiggins, a 6’6” freshman forward from Oglethorpe, and Kashif Davis, a 6’10” center from New York, both added seven points.
“This was a good effort,” said Jets head coach, Travis Garrett. “We probably have one of the tougher non-conference schedules in our league, but that will help us get ready for conference play. I saw some things that we need to address but we played hard.”
SGTC’s Jets and Lady Jets will both play this weekend. The Jets traveled to Tallahassee Community College for the TCC Classic tournament. The SGTC men play Eastern Florida State at 5:30 p.m. on Nov. 4. The results of this contest were not available at press time. The team will battle Tallahassee Community College at 3:00 p.m. on Nov. 5.
The Lady Jets will play at home on Nov. 5 and 6 in the Lady Jets Tip-Off Classic. The Lady Jets face IMG Academy on Nov. 5 and Denmark Tech on Nov. 6 at 3:00 p.m.