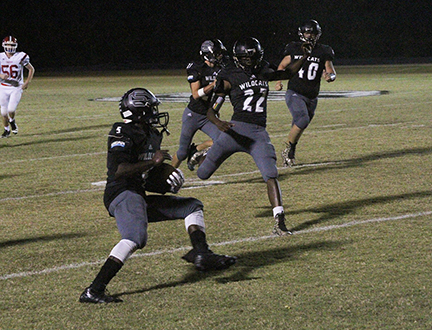 ATR File Photo: Schley County’s Calvin Sims (5) rushes down the right side of the field in a late-season contest against Pacelli. Sims helped lead the team to victory in their season closer with 83 rushing yards.

TALBOTTON – Following the previous week’s shutout of the St. Anne-Pacelli Vikings, the Schley County Wildcats hit the gridiron in Talbotton to add another victory to their tally before drawing the curtain on the 2016 season.
The ‘Cats wrapped up their season on a high note, blazing past the Central Hawks to snag a 40-6 victory and improve the team’s overall record to 4-6. With the loss, the Hawks drop to 1-9 on the season.
The ‘Cats got the ball rolling early in the contest, opening the scoring on a seven-yard keeper from quarterback, Will Barry, less than five minutes after the opening kickoff. Place kicker, Reid Ragsdale, then booted a spot-on PAT kick, giving the visitors an early advantage that they would continue to build on throughout the remainder of the game.
Schley cornerback, Calvin Sims, added another six-pointer less than a minute into the second frame with a 10-yard rush into the end zone. A Central defender got a hand on Ragsdale’s PAT attempt following the score, holding the Wildcats to a 13-0 lead, where the score would stay until half-time.
The Wildcats struck again shortly after returning to the field from the intermission when Tra Sampson broke the plane on a three-yard rush. Ragsdale’s kick evaded the hands of leaping defenders on the ensuing attempt, putting the ‘Cats up 20-0 with 10:23 remaining in the third stanza.
Just under two minutes later, Sims completed a Wildcat drive with a nine-yard trek, adding another six points to the total.
On the Wildcats’ return kick, the Hawks finally broke their silence, completing a 79-yard kickoff return to narrow the gap to 26-6 with 8:20 left in the third quarter.
The ‘Cats were far from done, however, as fullback, Clint Sellars, would go on to add another touchdown in the third frame on a two-yard run before repeating the performance in the fourth quarter on a one-yard rush.
Ragsdale split the uprights on his final two extra-point kicks, leaving the Wildcats with a 40-6 lead at the final buzzer.
Sims set the bar high for the Wildcats in the contest, covering 83 yards on the ground on nine attempts. Sampson added another 60 on eight carries, followed closely by Ragsdale with 58 yards on six attempts. Tyree Hawkins added another 36 rushing yards while Sellars and Barry contributed 25 and 13, respectively. In total, the Wildcats amassed 287 yards on the ground in the contest.
Barry completed five passes in the match to tack on 67 yards through the air. Zykievious Walker completed his only pass attempt of the match for another 28 yards, bringing the team’s total yardage through the air to 95 yards. Marquell Sims (15 yards) and Ragsdale (53 yards) each pulled down a pair of passes while Dartavious Napper (11 yards) and C. Sims (16 yards) snagged one apiece.
Walker set the pace for the team’s defense, contributing seven solo tackles (including one sack) and assisting on two. DeMarco Cross made four solo stops, contributed a trio of assists, and recovered a fumble for the Schley cause. Sellars stopped three runners on his own and had a hand in three more tackles. Napper added two solo tackles and two sacks. Alec Harris nabbed the Wildcats’ only interception of the match.
Sampson, Wade Rodgers, Christian Arnett, Jake Hall, Johnathan Thornton, Wayde Montgomery, Peyton Register, Daniel Reese, Cameron Dailey, and Michael Wainwright contributed stops to the victory as well.