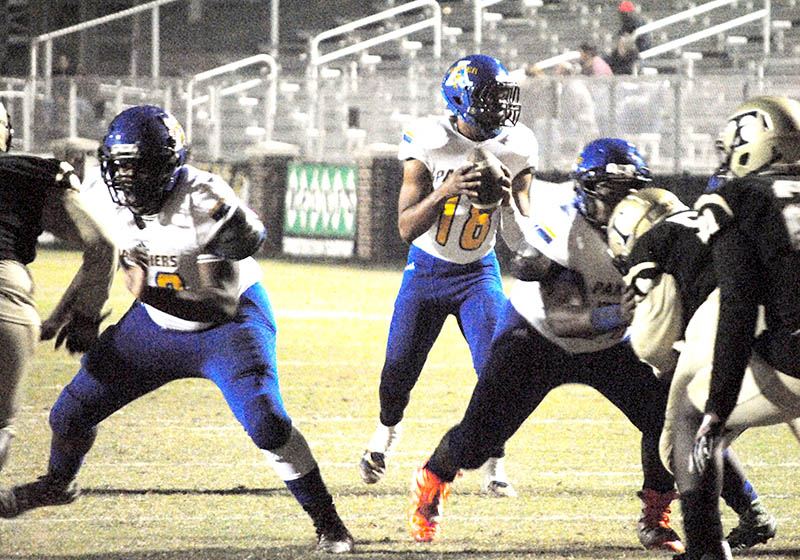 Photo by Caitlin Boland/ The McDuffie Progress: ASHS' junior quarterback, AJ Payne, scans the field for a an opening during the Panthers' Nov. 11 playoff match against the Thomson Bulldogs.

THOMSON, Ga. – Following their narrow victory over the Columbus High School Blue Devils on Nov. 4, the Americus-Sumter High School Panthers football team hit the road for Thomson, Ga. To take on the Thomson Bulldogs in the first round of the state Class AAAA playoffs on Nov. 11.
After a hard-fought battle, the Panthers found themselves on the low end of a 57-23 decision at the game’s conclusion.
With their opponents coming into the match in the number-two spot in the state in Class AAAA competition, the Panthers hit the field knowing that they were in for a tough battle and that’s exactly what the visitors got.
The Bulldogs amassed an early lead over the Americus team, exploiting costly turnovers to grab a 13-0 advantage over the Panthers before ASHS would see the end zone.
The Panthers eventually broke their silence when Daveon Johnson pulled in a pass and took off on an 80-yard run to break the plane and put the visitors on the board. ASHS place kicker, Carlos Hernandez’s kick narrowly missed its mark, leaving the score at 13-6. 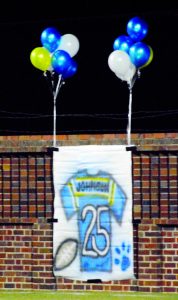 Thomson then took the ensuing kickoff and pushed their way to the Americus 12 yard-line. The Panthers recovered a fumble three plays into the drive, but another costly ASHS interception returned possession to the Bulldogs, who then scored from the four.
After forcing another turnover five plays into ASHS’ answering drive, the Bulldogs struck again, covering 22 yards for a touchdown to pull ahead 27-6.
A blocked punt on the following drive couldn’t keep the Panthers’ spirit down, however, as Kobe Lewis picked off a Bulldog pass with late in the initial frame. Lewis brought the ball back 97 yards, all the way to the end zone for the Panthers’ second score of the game. Hernandez’s boot hit its mark this time around, narrowing the gap to 27-13 before the buzzer signaled the beginning of the second quarter.
The Bulldogs added a 27-yard field goal early in the second frame before tacking on another touchdown several minutes later.
With the score at 36-13, the ASHS took their final possession of the half with three minutes left before intermission and steadily pushed forward to their opponents’ 25 yard-line. From there, ASHS quarterback, AJ Payne, was able to bring the ball within striking distance on a keeper. With only 23 seconds left on the clock, the visitors completed the final two yards of the journey for a clutch Panther touchdown. Hernandez, again, split the uprights to narrow the gap to 36-20 as the teams hit the locker rooms for the break.
ASHS received the opening kickoff when play resumed, and bulldozed their way down the field 72 yards before attempting a 40-yard field goal that sailed true, bringing the Americus squad to within 13 points at 36-23.
Unfortunately for the visiting fans, however, that would prove to be as close as the Panthers would get to a comeback.
The Bulldogs weren’t finished, though, and went on to tack on another 14 points in the third frame. In the final quarter, the Bulldogs added one more touchdown on a fake punt play to widen the gap to 57-23, where it would stay for the remainder of the contest.
With the loss, the Panthers’ season drew to a close with an admirable 5-6 overall record and a Region 1-AAAA record of 4-3. 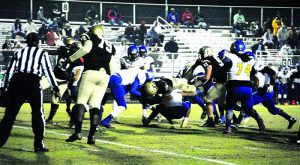 The Panthers say goodbye to 15 senior team members, each of whom were honored at the intermission of the team’s Nov. 4 contest. Johnson, Michael Terry, Eric Brown, Trendric Ingram, Malik Jackson, Jacquez Bartley, Trabian West, Michael Bridges, Floyd Fitzpatrick, Terrence Rush, Zyrieck Allen, Dontavious Brown, Ladarious McCrary, Denzel Hamilton, and Braylon Minter are each scheduled to graduate this year.
Though these players’ experience has been invaluable to the team throughout the past four seasons, the future of the ASHS football program looks bright.
The Panthers’ 2016 roster contains 25 juniors whose experience on the gridiron should prove to be a boon to the 2017-18 squad.
Among these junior team members is starting quarterback, Payne, who entered the team’s final contest ranked third in the region in pass yardage, having amassed 897 yards on 62 completions for the Panthers while splitting tossing duties with sophomore Panther quarterback, Kierston Harvey.
Returning running back, Lewis, will likely see more carries in the 2017 season with the loss of ASHS’ current leading rusher, Brown. As the Panthers entered the tilt against Thomson, Lewis was holding steady in the number-11 spot in Region 1-AAAA for ground yardage with 419 reported. According to the same report, Brown held the top spot for the Panthers and the number-nine spot in the region with 464 yards reported.
Also expected to return next year to join the Panthers on the gridiron is Braelin Williams, who had pulled in 33 passes for the team as of the Columbus High victory. With 393 yards gained through the air, Williams entered the team’s final contest tied for the fourth-place spot in the region with Cairo receiver, Jaylon Jones. ASHS senior receiver, Johnson, entered the contest with a firm hold on the number-two spot in the region, having contributed 434 yards on 32 receptions during the season.
Payne and Brown also entered the contest with six recorded touchdowns apiece on the season, good to lock the players in a five-way tie for the number-six spot in the region.
*All statistics were recorded from www.maxpreps.com and are subject to verification. 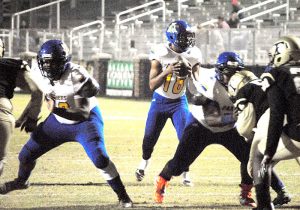 Photo by Caitlin Boland/ The McDuffie Progress:
ASHS’ junior quarterback, AJ Payne, scans the field for a an opening during the Panthers’ Nov. 11 playoff match against the Thomson Bulldogs.