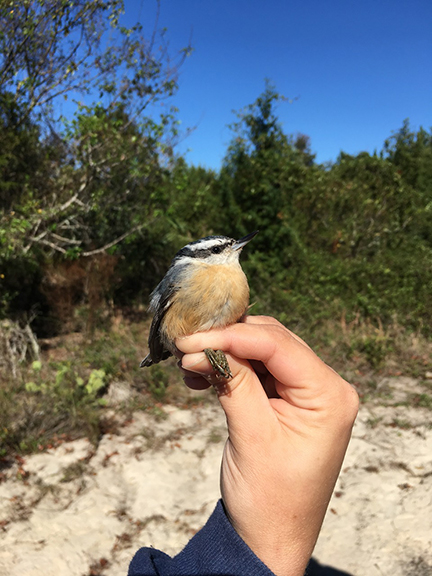 My long-sleeved shirt felt more than welcome on that brisk, Saturday morning of Oct. 22, 2016. The now gentle winds were mere leftovers from the previous day’s “small craft advisory warning” issued by the National Weather Service. But already several volunteers were busy working the mist nets at JIBS.
What is a mist net and what is JIBS? Most Georgia birders know JIBS as the Jekyll Island Banding Station. Located on South Beach, I wouldn’t advise that you search for a building of any sorts. JIBS is a temporary shelter or tent-like awning used to shade the many volunteers that give life to the bird banding efforts during fall migration along the Atlantic flyway. Many of the migratory birds that are caught, banded, measured, sexed, aged, and weighed will spend our winter months in the West Indies, Central or South America. These fall migrants follow the Atlantic coastline to their winter home.
“A bird in the hand is worth two in the bush,” is how the old saying goes. So how does one catch a migratory songbird? With a mist net of course. Think of a fine-as-spider web badminton net hung between poles. The almost invisible netting is difficult for the birds to see. Mankind has been using this technique to trap birds for eons. Trained volunteers carefully remove the birds, place them into a numbered, mesh bag, and take them to the banding station (tent) where Master Bird Bander, Evan Pitman and his wife, Heather, perform the banding. The bird is essentially given a “physical” and a unique numbered band is gently attached to the bird’s leg with a special tool that resembles a small pair of pliers. After recording the data, the bird is then released to resume it’s migration journey.
JIBS was founded by Don and Doris Cohrs. Their first banding efforts on Jekyll were during the fall of 1977, to “test the waters” and JIBS had their official opening a year later in 1978. In the 38 years JIBS has operated, many thousands of songbirds have been documented and banded for scientific study.
“We usually band between 1,200-1,500 birds during the fall migration,” explained Pitman. “In the fall of 2015, we banded 1,497 birds which was the most birds in one season since I took over running the station in 2011. The 2016 total was 1,393 birds of some 45 species. The numbers would likely have been much higher if not for missing days due to Hurricane Matthew and mandatory evacuation.”
According to Pitman, in the entire history of JIBS, a total of 123 different species have been caught and banded with somewhere between 40-45 species consistently banded every year. The most common species banded are Western Palm Warbler and Common Yellowthroat.
So why do we band birds? What benefits, if any, are realized?
Through the capture and banding efforts of birds, we can determine migration patterns and ranges of a particular species. We can ascertain if bird population numbers are on the increase, decrease or stable. These types of studies are valuable when determining if a species should be placed on an endangered species list by state or federal government agencies. We can also learn more about how long certain species live.
Of great benefit to ornithologists is the recapturing or recovery of a previously banded bird. Waterfowl hunters will often report banded birds they harvest to the USFWS. Birders with powerful spotting scopes can often read leg band numbers of shore birds and relay information to the Fish and Wildlife Service of when and where the bird was observed.
Here is a personal example of my recapture. On Jan. 9, 2003, Master Hummingbird Bander, Terry Johnson, caught and banded a female, Rufous Hummingbird in my Americus backyard. The hummer was released and continued for many more days visiting my sugar-water feeder that winter. On Dec. 28, 2004, almost two years later, that same individual bird was recaptured in Montgomery, Ohio, over 600 miles from Americus! But the most amazing feat of this tiny hummingbird is that they nest and breed in the Pacific Northwest and into Alaska. They are truly a long distance migrant.
While observing Heather Pitman carefully band birds with purposeful yet rote movements, Heather’s mother, Anne Armstrong of Macon, who also volunteers her time, delivered yet another captured bird in the mesh bag. The bird’s instinctive struggle to escape would be short lived as Heather worked methodically on a first in, first out basis. A smile on Anne’s face and excitement in her voice told us that this bird was something special. As Evan peeked through a tiny opening in the bag to confirm the birds identity a smile big enough to cover Texas broke out. A new JIBS record had unbeknownst been captured. This bird marked the very first capture of a Red-breasted Nuthatch at the Jekyll Island Banding Station.
As I’ve said before, observing birds is not only entertaining, comforting and pleasurable. It’s like that box of chocolates Forrest Gump described — you never know what you’re gonna get.