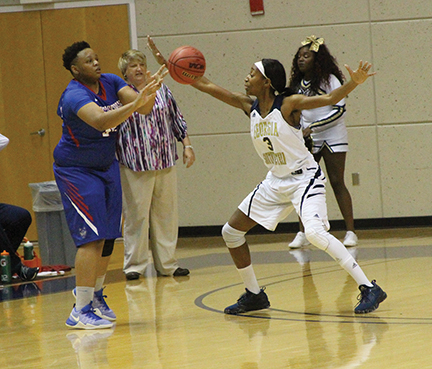 AMERICUS – Fresh on the heels of a 68-61 road victory against Coastal Georgia in Brunswick in which Kris Beckham scored a career-high 15 points, the Georgia Southwestern State University (GSW) Lady Hurricanes returned to the Storm Dome on Nov. 30 to battle the University of West Georgia (UWG).
The Lady ‘Canes continued their winning ways in the match-up, snagging their fourth-straight victory with a 53-44 thrashing of the Wolves.
GSW was on fire from the start, scoring the first 10 points of the game in under three minutes. Beckham and Shanya Jones both sank lay-ups, followed by Brittany Grant with back-to-back three-pointers to lead 10-0.
UWG came back with the next ten points to tie the game at the end of the first quarter.
Grant drained her third three-pointer to start the second quarter and Va’Queshia Hall put in a jumper to give GSW a five point lead. UWG was able to put in a layup before GSW’s next run. Aleah Holden started it with a jumper, followed by Grant with two free throws. Holden drained another jumper and Hall finished it off with two free throws.
The Lady ‘Canes held the Wolves to only three points in the second quarter to lead 23-13 at halftime. 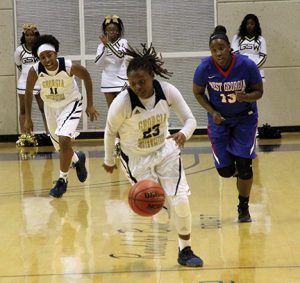 MICHAEL MURRAY I ATR:
GSW’s Brittany Grant makes a break for the bucket with a UWG player in hit pursuit during the Lady Hurricanes’ Nov. 30 contest.

UWG outscored GSW in the third quarter 24-16 but the Lady ‘Canes held the lead heading into the final quarter up 39-37.
GSW took a six-point lead to start the fourth after Holden made a free throw, followed by Kya Cochran with a jump shot and another from the charity stripe from Holden. UWG came within three points of the lead, but GSW kept their grit and put in the last six points of the game to take a 53-44 win over the Wolves.
Hall and Grant both put up 13 points and pulled down six rebounds to lead the Lady Hurricanes to their fourth straight win of the season. Holden led with nine rebounds and Khayla Owens grabbed seven.
The Lady ‘Canes are on the road Dec. 10 to play Albany State in a non-conference game.