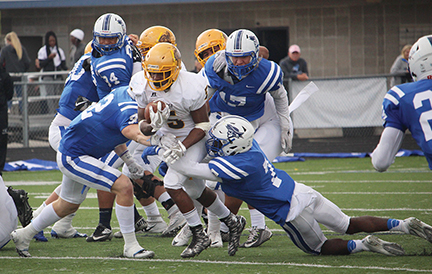 SUBMITTED BY GARDEN CITY COMMUNITY COLLEGE: Schley County native, Tra Minter (5) , attempts to break away from a pair of defenders from Iowa Western Community College during a GCCC tilt against the rival school on Oct. 15 in Council Bluffs, Iowa.

GARDEN CITY, Ks. – Former Schley County High School gridiron star, Tra Minter, has made quite a splash during his red-shirt freshman year at Garden City Community College (GCCC) in Garden City, Kansas.
On Dec. 3, Minter and the undefeated GCCC Bronco Busters traveled to Yuma, Az. For the El Toro Bowl; the NAtional Junior College Athletic Association (NJCAA) National Championship to earn a 25-22 win over the Arizona Western Matadors. Minter rushed for one touchdown in the championship match to help lead the team to victory despite being held to only 26 total yards by a very determined defensive line.
As a running back for the Bronco Busters, Minter has made a huge impression on the National Junior College Athletic Association (NJCAA) in 2016, according to the organization’s website.
As he participated in each of the team’s 11 games this season, Minter has amassed a whopping 1,336 total yards to earn himself the number one spot nation-wide among NJCAA athletes for 2016. Minter has also earned top-spot honors in the NJCAA for his 290 rushes during the season, which brings his average to 121.5 yards per game, which is the fourth-best in the league.
On the 2016 season, Minter has scored 11 touchdowns, earning him the number-10 spot in the league, and averaged 4.6 yards per rush. In the entire season, Minter has lost only one fumble, which the Bronco Busters were able to recover.
Minter spent four seasons, from 2011-14 playing for the Schley County Wildcats before graduating in 2015.