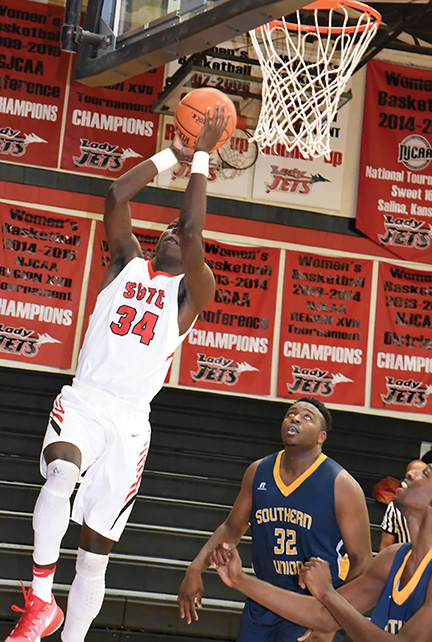 SUBMITTED BY SOUTH GEORGIA TECHNICAL COLLEGE: Marquel Wiggins (34) from Macon County, started for the Jets against Southern Union and led the team in rebounds with 10. Wiggins also contributed six points, one blocked shot, and one assist in the contest.

AMERICUS – The South Georgia Technical College (SGTC) Jets and Lady Jets both recorded big wins last weekend against strong Southern Union Community College (SUCC) teams in the Hangar in Americus. The SGTC ladies opened up with an impressive 68-42 victory to move to 10-1 on the season before the Jets came away with a 70-56 decision.
The SGTC men returned to the court the following afternoon, hoping to ride the previous day’s momentum into another victory, but were unable to hold off a late rally from undefeated Tallahassee Community College and suffered a 75-71 loss.
Following the action, the Jets’ record slid to 6-6 overall.
“We are excited to be 10-1,” said SGTC Athletic Director and Lady Jets head basketball coach, James Frey, following the team’s victory. “It is always good to get a win and continue to build momentum. Returning sophomore guard La’Deja James has been outstanding for us all year and our inside players, Desiree Corbin, Houlfat Hamouchiza, and Esther Adenike are really starting to produce for us on the board and in scoring.
“We know the things that we must improve on as a team to be a championship-caliber team and that is eliminating turnovers, boxing out more consistently, and execution on offense. Individually, we need our perimeter players to be far more consistent from the three-point line. That starts with them putting in a lot more work on their own away from practice and individual workouts.”
“We have a long way to go but I think we have a chance to be pretty good,” Frey concluded.
The Lady Jets pulled ahead early against the SUCC Lady Bison and were up 36-16 at the end of the first half. The hosts continued to stretch that lead in the second half to capture the 68-42 victory.
James led the team in scoring with 17 points, eight rebounds and six assists. She was followed by Desiree Corbin, who contributed 11 points and eight rebounds and Kanna Suzuki with 10 points and two assists. The Lady Jets also got strong play from freshman forward Mahouchize, who contributed nine points and 10 rebounds as well as Adenike, who added eight points and five rebounds.
After that exciting win, the Jets came out and took a 26-22 lead at the end of the first half to roll on to a 70-56 victory in the final game of the night.
“It is always good to get a win, especially at home,” said Jets head coach, Travis Garrett. “We didn’t shoot the ball particularly well tonight, but we did a solid job on defense, holding Southern Union to 56 total points. I thought Marquel Wiggins gave us a boost we needed, especially on the boards as he led us with 10 rebounds. If he continues to progress, he will be a huge asset when we start our conference play.”
Wiggins, the 6’6” freshman forward from Oglethorpe, led the team with 10 rebounds and tossed in six points. Wiggins also contributed one assist and one block.
Bobby Jackson was the leading scorer with 15 points. Jackson was followed by Ed Jones, who added 14 points and seven rebounds and Jalen Thomas, who tossed in 13 points.
The Jets returned to action on Monday, hosting nationally-ranked Tallahassee Community College.
The two teams were tied at 39-39 at the end of the first half.
The game saw 11 lead changes, but the Eagles opened the second half with a 12-2 run to jump ahead 51-41, which was the largest lead by either team all night.
The Jets knocked down 13 of 15 free throws to climb back into the game and eventually went up by three points in the final two minutes of play. Tallahassee answered swiftly, coming back to pull ahead by three points with less than a minute to play. A free throw with 12 seconds left sealed the victory for the Eagles.
“We had plenty of chances to win the game, but we just didn’t take advantage when Tallahassee made mistakes,” said Garrett. “We had them in the double bonus most of the second half and we didn’t attack the basket to get to the foul line. We had a great effort for 38-minutes, we are just going to have to execute better down the stretch.”
Garrett went on to discuss some things that the team is currently struggling with. “We gave up 18 offensive rebounds in three of our last four ball games,” he stated. We also had two costly turnovers down the stretch against Tallahassee and lastly, we need to do a better job of understanding time and score, especially in the final minutes of the game. Those three things have contributed to our last three losses.”
Even though Garrett was upset with the loss, he did recognize the great effort put forth by Bobby Jackson. Jackson contributed 15 points and five rebounds and may have played his best game of the season thus far, according to Garrett. “He got into foul trouble early in the first half, but he did a good job and had great effort,” he added.
Thomas tossed in 14 points and took some big shots down the stretch that rolled in and out. Thomas, DeAntre Mack, Ed Jones, and Wiggins all pulled down five rebounds alongside Jackson.  Mike Boone also dished out seven assists.
The Jets will now take a break until Dec. 29-30, when they travel to Ft. Myers, FL to participate in the Southwest Florida Classic. They will return home on Jan. 4 for a conference game against Chattahoochee Technical College.
The Lady Jets will travel to the Ft. Myers on Dec. 9-10 to participate in the Florida Southwestern Classic. They will then host Andrew College on Dec. 17 at 1 p.m. for their first conference match-up of the season.
The Lady Jets will host the Lady Jets Holiday Classic on December 29-30, before facing Chattahoochee Technical College in a conference matchup on Jan. 4.