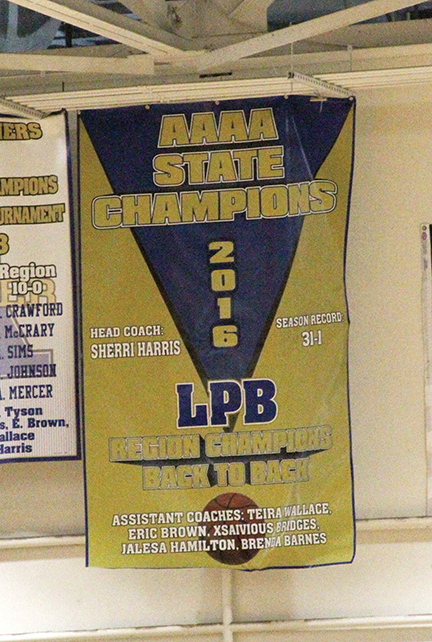 AMERICUS – There’s an athletic rivalry almost as old as the schools themselves between Americus-Sumter High School (ASHS) and Crisp County High School (CCHS). The two schools’ basketball teams continued their feud on Dec. 9 when the Crisp County Cougars and Lady Cougars traveled to Americus for a tilt against the ASHS teams.
The Panthers and Lady Panthers got the best of their guests this time around, with the ASHS girls opening the action with a 60-23 victory over the Lady Cougars before the Americus boys continued the battle with an 81-57 defeat of the Crisp boys’ team.
With the win, the Lady Panthers improved to 3-2 on the 2016 season before the ASHS boys took their fourth straight win to jump to 4-0.
Prior to tip off, ASHS principal, Kimothy Hadley, spoke to the growing crowd, to address the previous week’s tragic events before turning to a more positive note and unveiling a banner in the Panther Den commemorating the Lady Panthers’ 2016 state championship victory.
The Lady Panthers got the jump on their guests early in the evening’s opener, though a Crisp shooter put the game’s first points on the board with a free throw in the initial seconds of the contest.
ASHS’ Timia Swanson followed immediately with a lay-up to put the Lady Panthers on top before Crisp County’s Jelissa Reese answered with another two-pointer.
ASHS’ De’Asia Ford promptly tied the score with a free throw before assisting Tykiera Long with a lay-up that put the Lady Panthers up for good. 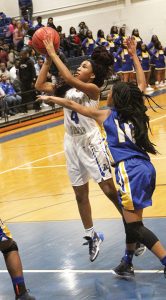 MICHAEL MURRAY I ATR:
ASHS’ Tykiera Long takes a jumper from the key during the Lady Panthers’ Dec. 9 tilt against Crisp County in Americus. Long contributed eight points to the ASHS victory.

Jykiera long followed with a long jumper before twin sister, T. Long, dished out an assist to Swanson, who tossed up another two points.
The Lady Panthers’ continued to pull away through the remainder of the frame to take a 12-6 lead into the second quarter.
The momentum continued in the second quarter with J. Long and Swanson adding more points to the ASHS tally before Shidajah Johnson got in on the action, laying one up with an assist from J. Long. The Lady Panthers continued in this fashion over the entire eight minutes to take a comfortable 30-13 lead into the locker room at half-time.
When play resumed, the ASHS girls picked up right where they left off, taking off on a 14-0 run that lasted until the 3:35 mark, when a Crisp sharpshooter honed in from beyond the arc to break the visitors’ silence.
Despite their determined efforts, the visitors only managed to add five points to their total in the third frame as the home team amassed a 52-18 lead to take into the final quarter.
The Lady Cougars made a little more progress in the six-minute fourth frame, but were unable to overcome their early deficit, eventually taking the 60-23 loss at the final buzzer.
Swanson set the pace for the victors, contributing 23 points to the win in addition to three steals and two blocks. J. Long followed, adding nine points alongside four assists and one block while T. Long tossed in eight points to accompany her two assists and one steal. Johnson added eight points and two steals for the ASHS cause in the match as well, followed by Ford, with five points and one assist.
The Panthers then took the floor, looking to make a clean sweep of the evening as the battle commenced the battle against the Cougars.
Eric Hall opened the scoring in the contest, tipping in a bouncy rebound ten seconds after the tip-off. Stephon Luster followed with a steal and immediately made a fast break for a lay-up. Kiante Sims then got the crowd on their feet, stuffing in an alley-oop tossed up by Hall before CCHS’ Quentavious Dean put the Cougars on the board with a fast break lay-up three minutes after the tip-off. 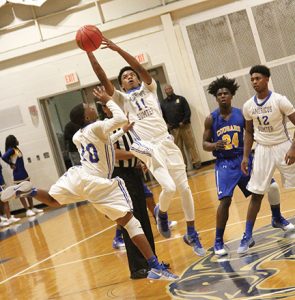 MICHAEL MURRAY I ATR:
ASHS’ Eric Hall (11) and Karmil Hamilton (10) leap after the ball following the tip-off of the Panthers’ contest against the Crisp County Cougars on Dec. 9 in Americus. Hall led the Panthers to victory with 18 points scored in the contest.

Hall followed with another lay-up for the home team just before James Baker zeroed in on the goal from long range to add his first of two three-pointers in the initial stanza. Sha’quel White soon got in on the action with a Malik Jackson-assisted two-pointer and the Panthers continued to pad their lead for the remainder of the first quarter.
With the Panthers up 20-3 and a fraction of a second remaining on the clock, ASHS’ Joshua Lusane tossed up a hail mary from half court and the home crowd exploded into applause as the ball popped off the backboard and slid through the net, giving the Panthers a 23-6 advantage as the buzzer sounded.
ASHS continued to run away with the score and eventually took a 46-18 lead into intermission. The Cougars showed their determination in the third frame, as they returned to the game to outscore the Panthers 21-9 and narrow the gap to 55-39. ASHS responded in kind in the final stanza, throwing 26 points on the board while holding the visitors to only 18 and cinching the 81-57 victory.
Hall led the Panthers in the win, connecting on eight of nine shots from the field and a pair from the charity stripe for a total of 18 points scored. Hall also added three rebounds, two assists, and one steal to the Panthers’ stats in the game.
James Baker was spot on from long range in the match, nailing each of his five three-point attempts to add 15 marks for the Panther cause. Baker also dished out four assists.
Karmil Hamilton contributed eight points to the win, followed by Sims and Luster, with seven and six points, respectively.
The Panthers and Lady Panthers returned to the court in Columbus on Dec. 13 to take on Region 1-AAAA rivals, Northside High School. The results of these contests were not available at press time.
The ASHS teams will head to Cordele on Dec. 17 to give Crisp County the chance to even the score before returning to Americus for the Phoebe Sumter Holiday Classic on Dec. 20. The Lady Panthers will take on Marion County before the Panthers go on to face Webster County.

SCPRD’s U8 gridiron team wraps up 2016 season with…